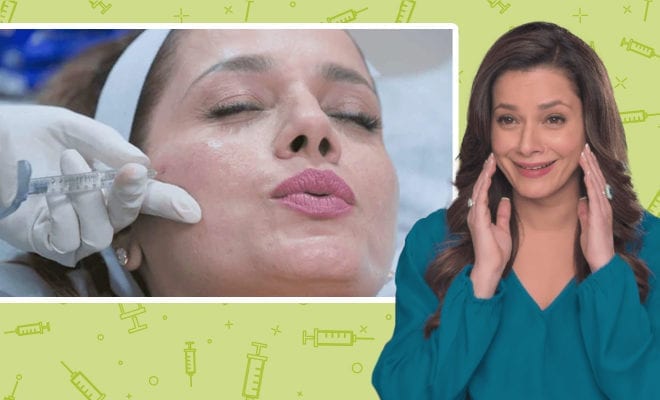 Neelam Kothari Talks About Getting Fillers On Camera And The Trolling That Followed. What’s The Big Deal?

You might have heard that adulthood is a scam. That bit is true.  A lot of truths that get harder to accept with time. And one of the most difficult ones, is always to realise that we are growing old. A feeling that kicks in strongly after your 30s and gets worse every year. Because this is when teasingly, the first white hair makes an appearance. A wrinkle pops up. Something that a lot of actors and actresses from the industry find a way around with fillers, but only a few would ever admit. Like former actress Neelam Kothari did.

In a recent interview with the actress who was also last seen in the Netflix show ‘Fabulous Lives Of the Bollywood Wives’, Neelam spoke about her decision to get fillers on camera for the show, and wondered if it was a smart move considering the trolling started not long after.

Thinking back to the time of the shooting, Neelam Kothari said, “I have no problem saying I am 50. I know that other women out there have had conversations with friends. Everyone is going through this ageing process. Whether in their minds or they are discussing it with their friends, they all want to look good and they don’t know what to do. So I told the creative team that I, myself, am going through this. I want to get something done but I am scared. I said I want to get a filler done. Very little, obviously. I asked if they wanted to capture it and they jumped at it.”

#NeelamKothari was called ‘buddhi’ for getting fillers on camera in ‘Fabulous Lives of Bollywood Wives’https://t.co/jzPDHWH8K2

Also Read : Shama Sikander Admits She Had Botox, Not Plastic Surgery As Trolls Assume. Knife Or A Needle, How Does It Bother Anyone Else?

She continued to add, “I just feel that why not? People lie about it and they hide it and say, ‘Oh, I don’t do anything,’ which is their prerogative. But I feel there is nothing wrong with going out there and being honest about it. Why not? I just feel it is going to help other women.” And perhaps that is the kind of honesty that we need.

Talking about one such session on the platform Clubhouse, Neelam shared, “Honestly, I am not sure if it was a very smart thing to do. Because some people were like, ‘Oh, great, you need ba**s to do something like this.’ But on my DMs, I would get messages, ‘Aye buddhi (Hey, old woman)’. So I am not sure if that was a very good idea but of course, you need guts to do something like that.”

What is your take on cosmetic procedures? https://t.co/ICyNMRNMGH

While we laud Neelam’s decision to be open about her choices and not hide them like a dirty little secret, it is exasperating to see a few trolls still finding reasons to bring some people down whether or not they decide to get fillers and be open about it.

Also Read : From Koena Mitra To The Women With The Biggest Cheeks, Why Does A Woman Going Under The Knife Concern Everyone?