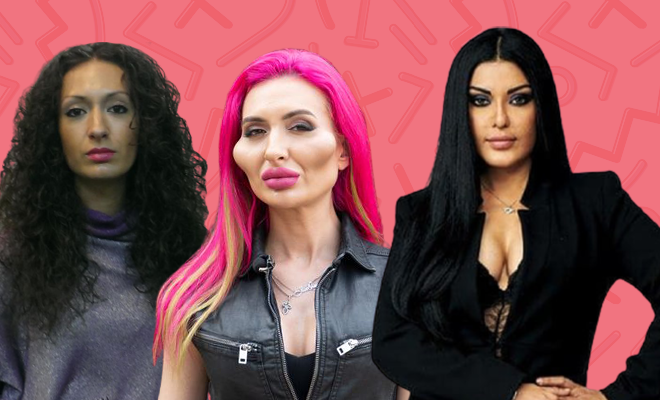 From Koena Mitra To The Women With The Biggest Cheeks, Why Does A Woman Going Under The Knife Concern Everyone?

Minor corrective procedures like the Botox to lift those saggy skin up or fillers to get fuller lips never hurt no one. Plastic surgeries today are becoming as common as, well, makeup which also does the same job, that is, correct and enhance your facial features. However, these cosmetic procedures involve some risk and are permanent and irreversible. That being said, if that’s the risk you are willing to take and beautify your features, it’s no one else’s business. However, we aren’t really good at minding our own business, especially when it comes to a woman’s decision about her own body. An Ukranian model who modified her look with medical procedures to have the biggest cheeks in the world and garnered million followers recently shared her picture from the days before she got the surgeries and the netizens were shocked.

Anastasia Pokreshchuk, now 32, has undergone multiple surgeries since she was 26 years old and has completely transformed her look. She has got her chin and jaw reshaped, fillers in her lips, cheeks and the sides of the mouth and botox on her forehead. She is obviously unrecognisable in the throwback picture she shared as she’s lacking the lifted cheeks, has thinner lips and a different jawline in it. She says she loves her look now and asked her followers which one they would prefer. To which, she got mixed reactions from people. She has said that she gets hateful messages for transforming her look but she doesn’t mind. In fact, she isn’t done with the cosmetic surgeries yet. She’d be making her cheeks even bigger because she feels they’re still small, regardless of what people think.

She has spent around  $2,000 (Rs. 1,45,530) only on cheek fillers in the six years that she has been getting these procedures. However, these are not to look like someone else or fit into beauty standards but simply look a certain way that makes her happy.We love her confidence but it isn’t the case with everyone. A lot of times women, especially those in the limelight are ridiculed and trolled for getting a plastic surgery done. From Anushka Sharma to Shruti Hassan to Koena Mitra, celebrities have always been the target of trolls even when they were okay with that.

Koena Mitra’s botched plastic surgery invited a lot of hate and negative comments from people which really hampered her confidence. In an interview, she said,  “I sat at home initially. But I could not take it any more and started going out with that face of mine.” She said she accepted her herself but the people who said all kinds of things about her didn’t let her. “I didn’t hide anything. But people spoke and wrote the worst kind of about me,” she added. Even years later, Mitra was trolled once again when she participated in Bigg Boss 13. It never stops!

This is just one of the many instances where a woman was hated and trolled for getting plastic surgery. And, it’s not out of concern, but sheer urge to control their decisions and make them feel bad about it. Somewhere, the beauty ideals set by the society are to be blamed which prompt women to opt for  risky procedures that often end up in a hazard. However, many people do it as a way to express themselves and enhance their features, not to please the society but to please themselves. However, as long as it’s safe and they’re happy with how they look, who are we to judge? There are some who deliberately take it to an extreme and then there are some who become victims of a botched surgery but even that doesn’t give anyone the right to put someone down or spew hate on them for going under the knife.