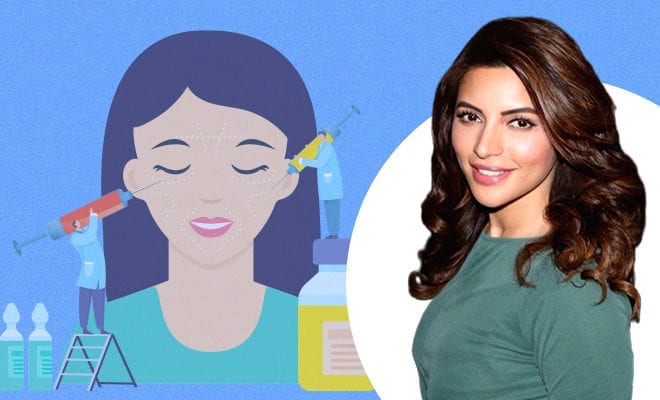 Shama Sikander Admits She Had Botox, Not Plastic Surgery As Trolls Assume. Knife Or A Needle, How Does It Bother Anyone Else?

I realised very early on in my life that whatever a woman does automatically becomes a concern of society. From the very trivial things like what she wears, to bigger decisions like getting plastic surgery, every move is dissected and discussed among everyone around. For celebrities, this circle of “jury” extends to the entire online audience who watch their every move. And if they don’t approve of anything, they resort to mean comments and trolls to make their opinions and disapproval clear .

Take for instance, Shama Sikander, who was trolled mercilessly for her features that appeared different in a 10-year-challenge post she shared on her social media a couple years ago. Since then, she has been asked and accused by her followers for getting corrective surgeries done. She finally decided to speak up about the speculations and clear the air once and for all. She openly admitted to having gotten botox (like a queen) but also clarified that it wasn’t a corrective surgery as people assume. Botox is a cosmetic procedure which helps reduce the appearance of wrinkles and makes skin firm where injected.

She said in an interview, “There is no plastic surgery involved in my case. I don’t know why people say I got plastic surgery done, when it is just cosmetic procedures. When people saw me I was a growing up girl. So certain physical changes were still going on. But from now on if I change completely then you tell me. I work out right, I eat right and I meditate, so the change on my skin is also because of this. People didn’t see me for so many years when I had gone out of the industry and was going through depression. I have taken botox treatment but that doesn’t come under the category of a corrective surgery. I have not gone under the knife.”

Having said that, she also feels that whether a celebrity gets botox injected in their face or chooses to go for a plastic surgery, it’s completely their choice and trolling them is unnecessary and pointless. And we agree. She said, “At the same time, people shouldn’t be bothered at all if any actor or actress is going for plastic surgery. At the end of the day, it is their hard earned money. People can of course have opinions, but trolling I don’t understand.”

She is right. There are some who would also oppose getting botox and criticise her for it but what I don’t get is how it actually affects these people online. You don’t like it? Then you don’t get one. It is as simple as that. Whether it is a knife or a needle, it’s their body and whatever they choose to do with it shouldn’t be anyone else’s business. Sure, you can feel a certain way about beauty procedures but trolling women who opt for it is just pointless.

And, Shama isn’t even the first one who has been the victim of assumption and later judgements for getting a minor corrective measure done. A lot of celebrities have been trolled for getting these procedures, regardless of how minor and major it was. And it is because of this reason that celebrities don’t admit getting cosmetic surgeries done, making it a taboo all over again. It’s a vicious cycle.

Well, we are glad Shama opened up about it because there’s nothing to be ashamed of. Trolls are gonna troll until it is truly normalised. Also, she said that she isn’t affected by the trolls anymore. “Trolls rarely affect me now, all thanks to the meditation that I practice on a regular basis. That helps me keep calm,” she said.

Also Read: From Koena Mitra To The Women With The Biggest Cheeks, Why Does A Woman Going Under The Knife Concern Everyone?