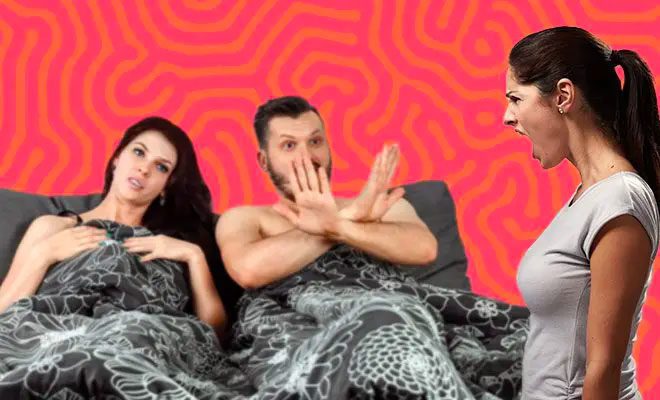 Today, it doesn’t take time to get any video/picture viral on social media. Especially if it is hilarious or entertaining. Or both. But there are times when that hilarious situation is actually problematic and that aspect of the video no one talks about. For instance, take this recent video that went viral. In the video, a woman is seen crashing the job interview of her sister and thrashing her for having an affair with her husband. Now, the video is hilarious for sure, but what we don’t see is that even today, we blame the other woman for luring the husband into having an affair, whereas the husband is not embarrassed publicly like in the video.

On Saturday, a Twitter user named @59dallas shared a video that has now gone viral with more than a million views. In the video that someone from inside the office has filmed, you can see the entire fight where the scorned woman crashes her sister’s job interview and thrashes her for having an affair with her husband.

Wife Crashes Her Sister’s Job Interview After Finding Out She Slept With Her Husband pic.twitter.com/2SzzFPu3kS

Also Read: Tamil Nadu Woman Murdered Her Husband After He Found Out About Her Extra Marital Affair

The video that was posted on Twitter was captioned, “Wife Crashes Her Sister’s Job Interview After Finding Out She Slept With Her Husband.” The netizens who came across the video have had a gala time laughing at the video.

As per DNA India, thousands of Twitter users have even commented on the video with really creative replies and laughed at the video. But there were many other users who highlighted that when we speak about affairs, more often than not, the spouse is hardly ever blamed for it and all the anger is shown towards the other woman/mistress involved. In fact, one of the comments said, “All that anger needs to go to that husband. Women too often blame women for their partner’s infidelity. Unique situation I understand but this is such nonsense.”

All that anger needs to go to that husband. Women too often blame women for their partners infidelity. Unique situation I understand but this is such nonsense.

Also Read: Two Women Have Affair With Same Man, Kill Newborns When He Didn’t Marry Either

And honestly, I agree with this Twitter user’s comment on the video. Why is it that the husband is not facing the wrath of the woman? Why is the sister being embarrassed publicly but not the husband? Why is it that when two people are having an affair, the blame is always put on the woman and no one questions the husband? This thinking needs to change. We as women should be supportive and encouraging of other women. Infidelity is not just a woman’s fault. Both partners are involved equally. So, blaming just the woman for your partner’s infidelity is unfair. And we need to change that. We need women to stop blaming other women for their partner’s infidelity.

Twitter Thread Explains Why The ’Nagging Wife’ Trope Keeps Husbands From Realising Their Wives Are Unhappy. It’s Spot On.