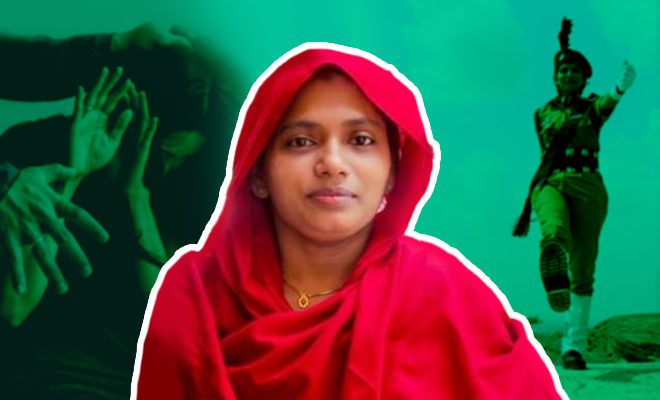 From A Domestic Abuse Victim To A Civil Officer, The Journey Of This Woman Is The Kind Of Motivation You Need!

While most women around me would unfortunately have had an experience or two with facing abuse or harassment in their lives, because for us it is just that common, there is probably no denying that when the same comes from people you love and trusted, it breaks you a little more. As it happens with several women every day, where they are abused and violated by their own husbands. One such woman being Noujisha, from Kozhikode who had also been abused by the hands of her partner.

Recalling how bad the experience was for her, and reiterating the impact that it had on her, so intense that she almost wanted to take her own life. Noujisha said, “Finally, I decided to call it quits from life. I had no other way out of the extreme  torture inflicted by my husband. That night, I slowly walked towards the well. My plan was to jump into it, but when I neared it, I lost courage. My body began to shiver.”

And perhaps, it was that moment that went on to become a turning point in her life. Summoning up all the courage and deciding to swim against the current, Noujisha started pursuing her dreams instead. And from that point on, there was no looking back for her.

Fighting against the odds, the same woman who once feel prisoned to her circumstance where she would be beaten by her husband, was now a reputable civil police officer (WCPO) under training at Peruvannamuzhi. Sharing how before she had gotten married, she was a  guest lecturer, Noujisha told, “I had told my husband’s family about my ambition to go for work before the alliance was fixed. They agreed then, but my husband reneged on the promise after tying the knot. My husband didn’t value the certificates I had obtained by burning the midnight oil for long.”

From suffering abusive marriage to being suicidal, Kerala woman overcomes odds to become cop .Ms.Noujisha is a determined woman who can lead an independent life .https://t.co/AspqfYcWOo

Soon after, she recalled, the domestic violence started. It went on for 3 and a half years until she finally decided to keep her foot down and came back to her parents place with her son. Not wasting any more time, she teaching in a college all the while attending coaching classes for Kerala  Public Service Commission (KPSC) competitive examinations.

“I soon realised that I need full-time coaching and I stopped teaching.  Meanwhile, she filed the divorce petition. “It was a horrible phase in my life — fighting the case with a non-reliable lawyer, attending coaching classes and bringing up my kid,” shared Noujisha.

Finding a place for herself in the KPSC supplementary list for the lower division clerk post  as a civil officer in Ernakulam  district, she then got the 141st rank in the state-wide list for WCPO. “As I wanted to work in my home district, I opted for the state-wide rank list and joined as a woman cop on April 15. Tears rolled down my cheeks when I got the appointment order,” said Noujisha.

Thinking back to her ordeals, she now says, “Now, I have found that there is no need to harbour such fears and any woman can directly go to the police. There is a helpline number — ‘Mithra 181’ — for suffering women. But many of our rural people do not know about such services.” Her journey from a victim to an accomplished civil officer is no short of an inspiration. “Job is the real power, especially for women.  Instead of suffering in silence, women should come out of the ordeal and chase their dreams,” says Noujisha and we agree with her cent percent.

Also Read : This Woman Will Run 285 Miles In A Wedding Dress To Raise Aware For Narcissistic Domestic Abuse