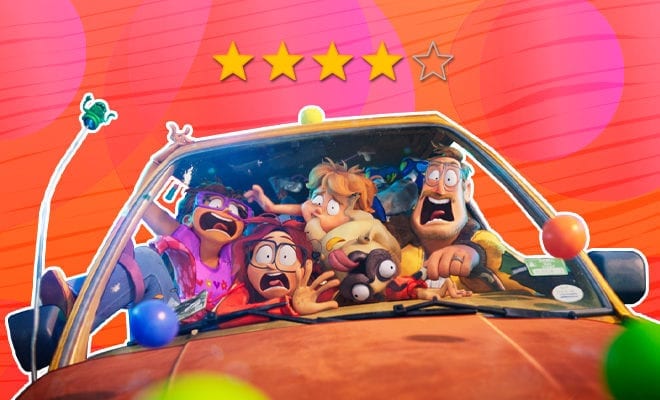 Can We Talk About The Surprise Joyride That Is ‘The Mitchells Vs. The Machines’ On Netflix? Watch It Now

Before I tell you about the film, let me set the mood for how I stumbled upon The Mitchells Vs The Machines. It was a tiring Wednesday in a week that was so dreadful that I didn’t feel like watching anything at all. I was aimlessly browsing through my Netflix when up popped the film. I recalled reading some tweets about the movie, and a news article that mentioned its illustrious voice cast—Abbi Jacobson, Danny McBride, Maya Rudolph, Beck Bennett, Fred Armisen, Eric Andre, Chrissy Teigen, John Legend, Charlyne Yi, Blake Griffin, Conan O’Brien, and Academy Award winner Olivia Colman. Oh and also Instagram celebrity doggo, Doug The Pug as the dog Monchi, who was already a coveted pet on Twitter. The humans who created and produced this movie—Mike Rianda (director), Jeff Rowe (co-director, writer) and Phil Lord and Chris Miller (producers)—were the same ones who brought us The LEGO Movie, Spider-Man: Into The Spider-Verse and Gravity Falls.

But yeah, who am I kidding? It was Monchi. It was all Monchi, one dog (or pig? Or dog? Errrr system failure!), that led me to hit play. And for the next nearly two hours, I laughed heartily, felt all sorts of mush, and was really scared of my cell phone, thanks to the funny, charming joyride that is The Mitchells Vs. The Machines!

What’s The Mitchells Vs The Machines about?

The film’s official synopsis reads, “Creative outsider Katie Mitchell is accepted into the film school of her dreams and is eager to leave home and find ‘her people’, when her nature-loving dad insists on having the whole family drive her to school and bond during one last totally-not-awkward-or-forced road trip. But just when the trip can’t get any worse, the family suddenly finds itself in the middle of the robot uprising! Everything from smart phones, to roombas, to evil Furbys are employed to capture every human on the planet. Now it’s up to the Mitchells, including upbeat mom Linda, quirky little brother Aaron, their squishy pug, Monchi, and two friendly, but simple-minded robots to save humanity.”

Now Monchi might’ve been my lead in to watching the movie but the autoplaying trailer further reeled me in. Of course, we’ve all been hearing that some day, the machines will overpower the very humans who created them, in a Robot apocalypse of sorts. To have a cellphone OS named ‘PAL’ (that too voiced by Olivia Colman, QUEEN!) do that is just so perfectly diabolical!

But it was more those relatable family dynamics of The Mitchells when it came to technology that tugged at my interest. Katie’s love for technology was not just a generation thing, but also born of her creativity and the need to express herself through filmmaking. Neither of which were understood, it seemed, by her father, Rick, who was like most fathers are! He repelled technology and I could see my own frustration getting mirrored in Katie’s when she got her father to use some gadget!

There was also the whole theme of kids going through a phase where they think their parents don’t understand them or their hopes and dreams. But sometimes, it is parents just being protective of their children, because their own dreams were shattered at some point, and that hurt. While I do think that particular angle has been explored aplenty on screen, I like how The Mitchells Vs. The Machines tackles it—Rick Mitchell isn’t dismissive of Katie’s interests, he’s probably just downplaying his own emotions. And aren’t moms always like liaisons or conduits for the love to flow back and forth between children and fathers?

So yes, like every other end-of-the-world scenarios, this one too gets a happy ending because humanity somehow prevails above everything else. No, please, not “love”.  I’m glad the film dismissed that cheesy idea early on!

Also Read: 5 Thoughts We Had About ‘The Last Hour’ Trailer: We Love A Good Supernatural Twist To Our Crime Thrillers!

The Mitchells Vs The Machines marries two animation styles and the result is unique and looks incredible!

At first, it might look like the film’s animation is all over the place. Because when it is The Mitchells we’re looking at, there’s like handmade illustrations brought to life. They feel much softer and messy. But when it is the robots and the Silicon Valley, it’s all much precise and more sharper, like the proper CGI animation we’re used to. Well, turns out, the Character Designer Lindsey Olivares and Head of Character Animation, Alan Hawkins, have actually merged both these styles to give a homely, more organic feel to scenes with The Mitchells and a more stern and formal feel to the robots.

I also loved how the scenes with The Mitchells before they enter the PAL LAB headquarters are so crowded and cramped, perhaps reflecting the feeling of how family is always huddled and close, and sometimes even claustrophobic. As opposed to the scenes in the end where there’s lots of open, wide spaces with practically nothing to hold on to. You easily feel dwarfed by it!

I LOVE The Mitchells’ home, especially Katie’s room, because it feels so lived in. Things are wonky all around the house, there are signs of wear and tear and years of use on the furniture. It all feels every authentic and adds to the vibe of what Katie might be feeling when she is at home with her family, and why she wants to move out so fast. I only later discovered the references to The Simpsons and 2001: A Space Odyssey (the names PAL and HAL ring a bell?) but now that I know about it, it makes me love the film all the more. While all the characters were a total delight to watch, including the dinosaur-loving Aaron Mitchell voiced by director Mike Rianda himself, I think the character of the genius tech billionaire, cleverly named Mark *winks*, takes the cake for the wittiest writing. I like that he isn’t exactly a bad guy; IRL too, most tech big boys start out as wanting to use their genius inventions for something good, until greed and blind ambition to prove something renders them incapable of stopping.

The freeze frames were brilliant and made me laugh quite a bit, particularly the one about Rick Mitchell’s driving, because all fathers have their driving moves that their children really dislike!

A few more things I enjoyed in the film…

Linda Mitchell’s ninja transformation, OMG! Aaron’s obsession with dinosaurs was adorable. I loved the Instagram-filter quality that you’d see a lot in the movie, as well as the Instagram influencer family that Linda Mitchell is obsessed with! I get you, Linda. Aren’t we all? The two robots who fall for ‘Maa Ka Pyaar’ was so Bollywood, it made me laugh loudly! I think the robots in general were hilarious, like in the shot when they think the Mitchells in their orange car are some kind of warriors. And how can I forget, the mall scene with the Furbys!

Last but never never never the least, is my dear Monchi. I love that dog. I’d cause an apocalypse just to give it a hug.

Also Read: ‘Why Are You Like This’ Review: A Deliciously Irreverent Satire On The Always Online, Super-woke Generation

Before, when someone said animated movies, our first thought was either Disney fairytales and cartoon franchises or later on, soulful Pixar animations. But now there’s this whole new world of animated movies offering not one but several fantastic point of views, from reimagined fairy tales to dystopian post-apocalyptic scenarios even. And these are films that you can watch together as a family, because there’s fun for the kids and important life lessons for the elders. But without getting preachy and boring.

The Mitchells Vs The Machines on Netflix is totally, absolutely, and unequivocally THAT film. This film is also a bit mad, in that it is all over the place, whether it is with its animation styles or the themes and plot points that it so heavily borrows from other, popular animated movies. At some point you’re confused—Is this a road trip movie? A family drama? An apocalypse sci-fi thriller that rests on a person who repels technology to figure out how to work YouTube? Or is this about how a dog managed to foil the plans of robots to take over the world? Yeah, the last part happens!

But what matters is that The Mitchells Vs The Machines is a surprisingly delightful joyride that is kitschy mix of all of the above, and has not one, not one dull moment! Go watch it with your fam, and give my love to Monchi!