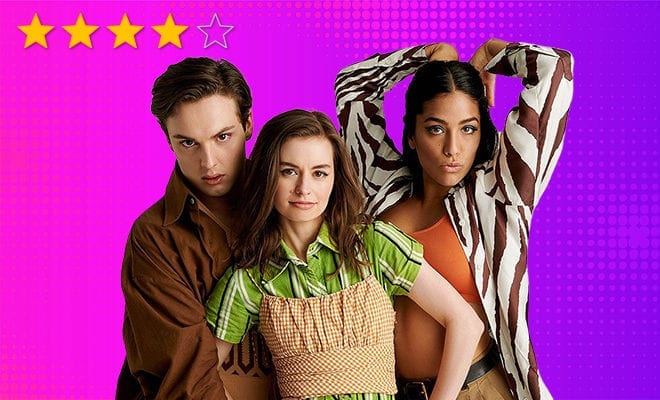 Before I launch into all the ways that I LOVED this show, here’s a disclaimer. If you’re someone who has dainty sensibilities and gets easily offended, or are not a fan of dark, nihilistic humour that is one of the most definitive quality of our current generation, please leave. Seriously, vamoose outta here now, because this show has truckloads of it. I mean, it’s literally named after the popular meme Why Are You Like This is? that questions why people are so… you know, in whatever way inappropriate they are. And that’s exactly what this Australian show, created by ABC’s Mark Bonanno, lawyer and freelance illustrator Humyara Mahbub, and comedian Naomi Higgins, is—Inappropriate AF. But its twenty-somethings characters—Mia, Penny and Austin, played by Olivia Junkeer, Naomi Higgins and Wil King—are so goddamn relatable in their insecure, offensive, and often cruel selves, that it feels in many ways, liberating to watch them reign in all that imperfect glory.

Season 1 just dropped on Netflix, and it comprises six episodes of barely 30 minutes each, which makes it a perfect one-sitting binge for the weekend. We’ve seen longer Bollywood movies!

The way I stumbled across Why Are You Like This is a funny story in itself about how we millennials or Gen Z or whatever the next letter is, are all over the place. I opened Netflix to continue my Shadow And Bone binge (check out my review here!) and this show was right there, on the top, in new arrivals. I vowed to check it out because it seemed hilarious. But my brain was just too clouded with ‘bad boy Ben Barnes’ thoughts and my Instagram, that when I was finally ready to watch it, I couldn’t remember its name! My stupid arse forgot to add it to my queue! When I finally stumbled upon it again after turning Netflix upside down, I breathed a humungous sigh of relief, like I’d just found my lost phone or something! Relate much?

That’s just how crazily scattered the lives of Penny, Mia and Austin are. In their 20s, and living in Australia, they are BFFs navigating the usual things that young people have to navigate—friendships, love, money, identity, existential crisis when they can’t figure out their purpose in this world. But if you think Why Are You Like This? is just another garden variety millennial Sex And The City knock-off, then you’re so wrong.

Because there are so many filters on these basic themes! Like, navigating not just the physical world but the online world as well, where everything from bullies to cancel culture is eating us alive. Or being super woke, and making sure you’re not offending anyone, but then also being edgy enough to stand out as cool. You’ve gotta be someone who gets on that ‘Weekend’ party bandwagon and lives the Insta-worthy life. But to do that, you’ve got to keep a job that probably sucks the joy out of you, like a daily administered Dementor’s Kiss. And let’s not forget that we all have different versions for different people in our lives—our parents, our childhood friends, our roomies, our coworkers and the Twitter fam!

Why Are You Like This? has a handle on all of this and more. But here’s where my love for the show comes from—it doesn’t do it in some sappy, preachy way, with characters who appear to be grey but are always more white than black. Mia, Penny and Austin aren’t good or bad. Often times, and Mia most of all, is downright cruel. Like I’ll-probably-let-you-die-because-my-BFF-doesn’t-like-you… cruel. In fact, I am going to go on and say she is my favourite character because of the way she just doesn’t care about being politically correct all the time. Not because it is not important, but in some weird combination of inventor’s rights and ‘I am a marginalised community member so I can say it’ liberty. She manipulates, uses her sex to her advantage, and is a full-blown hypocrite. And she owns it.

I particularly enjoyed the show’s take on culture and religious, and how Mia is the perfect representative of this generation. She’s a Bangladeshi Muslim living in Australia, who adheres to only those aspects of her culture and religious identity that she wants, and doesn’t hesitate in mocking the ones she doesn’t approve of. That in itself was so liberating to see on screen in the Ramadan episode, because can you imagine how much better the world would be if we all took our religions this lightly?

But these aren’t inherently bad people. They’re just… people, trying to figure stuff out and sometimes they just can’t with the world so they let it go. And they let it go so hard that you look at them and say, OMG why are you like this? What’s wrong with you? *shrugs* It’s like when even the most woke women will use abusive words that are actually insulting to women or their genitalia, but it’s not out of disrespect. In contrast, there’s also Penny, who’s job it is to be politically correct in every way. And she’s the perfect example of how exhausting it can be to be super woke all the time, and how people might think of it as intrusive and annoying.

Austin, I think, was the most relatable for me though. His dread as he tries to find out who he is, lack of self-control, and the depression that he is trying to dismiss as non-existent… it’s something that most of us are feeling right now, in the uncertainty that is the pandemic.

Why Are You Like This… is the question you’ll probably want to ask the first episode of the show. If you aren’t used to the irreverent British humour that is unapologetic about who it offends, this might take some getting used to. Also, we’re just straightaway thrust into the lives of these people that might be unlikable on the first meeting but grow on you as the season progresses because their antics are hilarious and relatable.

Also, what is with young people being able to afford such lovely homes on their salaries? Here, we see that only Penny has a stable job, Mia has lost her’s and is working as a waitress, and Austin is between gigs and almost broke because of his expensive shopping habits. So how are they affording that place?

It’s hard being young. Let’s accept that. And that’s why Why Are You Like This feels like a liberating experience. Most of us going through life with a stick up our arse might get annoyed by Penny, Mia and Austin at first, but eventually, it morphs into this sort of envy. You wish you could be that carefree, and devil-may-care. The best part, though, is that the show does not at any point apologise for any of these characters’ behaviours. Instead, it revels in its nihilist attitude which is synonymous with the millennials and Gen Z.

It was the perfect show to watch in this climate, to give yourself a window where you don’t have to give a flying f*** about anything and let the damage just happen!

Also Read: ’22 vs Earth’ Review: Prequel Short To Disney Pixar’s ‘Soul’ Sparks Joy With Its Take On The Meaning Of Life!

GET HAUTERFLY IN YOUR INBOX!
Related ItemsFeaturedNetflixAustraliaShowsEntertainmentsitcomswokeWhy Are You Like This