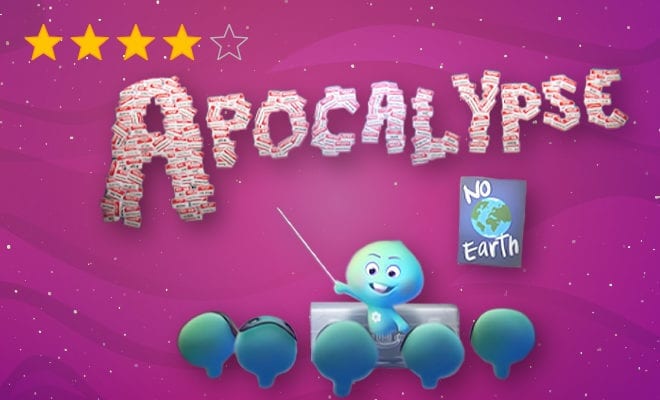 It was just this Monday that Disney Pixar’s Soul won the Oscar for Best Animated Feature Film at the 93rd Academy Awards. And as if the joy of that news was the spark that it had been waiting for to complete its badge, 22 vs. Earth jumped right at Earth, on Disney+Hotstar, for us to watch! The five-minute Disney Pixar short film is a prequel to Soul, and brings back two of my favourite things from the feature film—22, the cynical soul that just doesn’t want to go to the dumb planet called Earth (ouch!), voiced by the amazing Tina Fey. And The Great Before, with its Picasso art-inspired figures that manage it, all named Jerry. The short is the directorial debut of Inside Out editor, Kevin Nolting, and is produced by Lourdes Alba.

I love the idea of a palatable short that explores 22’s back story and what caused her cynicism about Earth built up so much over time. But the first look had me with the Apocalypse Now (1979 film by Francis Ford Coppola) reference! Wait, so 22 is planning what now? Let me tell ya (no spoilers, promise!)

From Soul, we know that 22 is quite the loner. But why is that? Sure, she wishes to never go to Earth, having decided to stay back in The Great Before and continue exploring the extend of it, while the other souls unquestionably believe Earth is their destiny. But with this short, all of it just falls into place.

We meet her when she’s assembling a really cool gang of five souls into a team called APOCALYPSE, and I will let you discover just why that name, because it’s hilarious. Their mission? To stop the other souls from discovering their spark, and thereby completing their badge that lets them enter Earth. So evil, right?

I guess, even before I watched the film, I knew how this mission might fare. But the journey of getting to that ending is quite fun, and an absolute delight to watch, even if how it all happens isn’t exactly helping 22’s cause!

Also Read: 6 Feel-Good Films And Shows To Help With Some Of That Second Wave Anxiety

The Disney Pixar short packs all the humour, cuteness and insight of Soul into a snackable bite!

I think the makers have done a pretty great job packing so much humour and hints about what the meaning of life could really be, while incorporating all the callbacks, details and theme that made Soul such an endearing watch. Tina Fey as 22 is just as good, but I think this short belongs to her team, those five adorable blank slates that 22 convinces into joining her cause. My favourite scene, and I can bet it will be yours too, is the one where 22 is explaining her mission plan to her team, because their antics are hilarious!

The short ends with quite the clue to what the meaning of life could be and what that elusive ‘spark’ is that brings us to this Earth. And I like how it cleverly allows us to work it out ourselves, and interpret it as we’d like.

22 vs Earth isn’t a prequel that we explicitly asked for. But as a fan of Soul, I’m kinda glad it exists. I was actually hoping we get some more insight into The Great Before, because it is such an interesting concept! After watching this one, of course, I have a bunch of more questions about ‘the spark’, and I’d love if Disney Pixar explored these existential realms more!

Especially in a time like this, when we’re all going through an existential crisis of our own, the short that is just as joyful and funny as the Oscar-winning ‘Soul’, 22 vs Earth might help you discover a little more about the meaning of life and your own ‘spark’ that seems so dulled right now.

22 vs. Earth, from Disney Pixar, is currently streaming on Disney+ Hotstar.