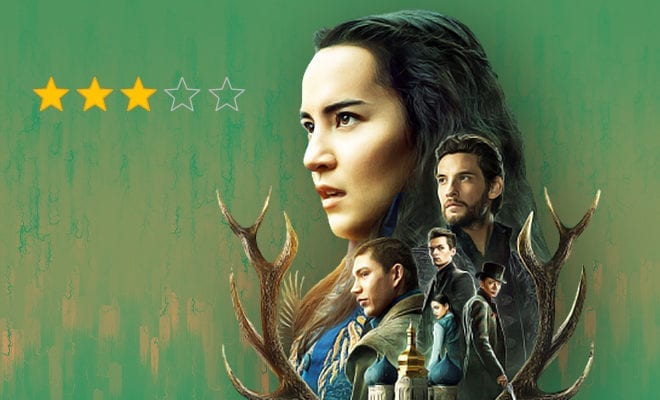 5 Reasons Shadow And Bone, The New Fantasy Adaptation On Netflix, Is Worth Your Time

I feel like there’s an unspoken covenant between all readers—we’ll always agree that the book is better than the movie/show. I find that oft times that comparison is a unfair, because books get so much more time for world-building. Then again, a picture speaks a thousand words, so what gives? The latest book adaptation to hit Netflix, Shadow And Bone, is from the fantasy genre. And a very popular one at that—the Grisha novel trilogy by Leigh Bardugo. The series, developed by Eric Heisserer, is based on the first book in the trilogy, Shadow and Bone, as well as an associated duology by Barduga, called Six Of Crows. It stars Jessie Mei Li as the protagonist Alina Starkov, Archie Renaux as Malyen Oretsev, Freddy Carter as Kaz Brekker, Amita Suman as Inej, Kit Young as Jesper Fahey, Sujaya Dasgupta as Zoya, Zoë Wanamaker as Baghra, Danielle Galligan as Nina Zenik, Calahan Skogman as Matthias Helvar, Daisy Head as Genya Safin, and Ben Barnes as General Kirigan / the Darkling.

The series is directed by Mairzee Almas, Lee Toland Kreiger, Dan Liu and Jeremy Webb. And when I say there are expectations from it, I am not kidding. Grishaverse fans are absolutely excited for their favourite series to finally be realised on screen. What is a Grisha, you ask? And is the excitement fulfilled or not?

Well, let me tell you!

What’s Shadow And Bone About?

The show’s official synopsis does a decent job of explaining the grander scheme of things.

“Shadow and Bone finds us in a war-torn world where lowly soldier and orphan Alina Starkov has just unleashed an extraordinary power that could be the key to setting her country free. With the monstrous threat of the Shadow Fold looming, Alina is torn from everything she knows to train as part of an elite army of magical soldiers known as Grisha. But as she struggles to hone her power, she finds that allies and enemies can be one and the same and that nothing in this lavish world is what it seems. There are dangerous forces at play, including a crew of charismatic criminals, and it will take more than magic to survive.”

So yes, there’s a Chosen One story at the centre of things here. Ravka, the country that is where most of the action happens, has been split into two by the ’Shadow Fold’, a stretch of land that is devoid of any light, and where flying monsters called Volcra attack anyone and anything trying to cross to the other side. And yet, there are many who risk their lives to do it, even as the King’s armies, comprising soliders, cartographers (map makers) and Grisha (people with magical powers) find ways to bring the The Fold down. There’s prophecy of a Sun Summoner who will help with this task, and Alina, a mapmaker in the army, is discovered to be one when she tries to save her childhood BFF, fellow orphan and secret crush, Mal, from a Volcra.

Upon discovery, she’s taken to General Kirigan, the leader of the Grisha, and a descendent of the Grisha who created The Fold. He wants to train Alina so together they can bring it down and restore dignity to the name of Grisha. Meanwhile, in another neighbouring country, Ketterdam, Kaz Brekker and his associates Jesper and Inej (a Wraith) take on assignment worth a million kruge (currency) to kidnap and bring the Sun Summoner to a wealthy merchant who’s willing to pay for her.

There’s also another storyline intersecting, where Grisha Nina Zenik gets captured by Grisha-hating Fjerdans and taken to their country, Fjerda, to be prosecuted. However, her relationship with one of them, Matthias Helvar, puts both of them on a different path altogether.

Also Read: ‘Searching For Sheela’ Review: Dharma Documentary Is A Cold, Pointless Cup Of Koffee With A Charged Criminal

Is Shadow And Bone as good as the books and/or worth all your time?

Okay, while the show is an exciting prospect and whole new world to discover, NGL, there are quite a few things that I wished were better. For starters, I’m sure Jessie Mei Li is doing her best as Alina, but perhaps it is the writing that is making her seem very thanda and uninteresting. In fact, everyone else, including two gay Grisha boyfriends, seem much more interesting as characters than her. And it is also probably why her slow-burn romance with her childhood bestie, Man, also feels too vanilla. Like I can see the potential there, because these are some talented actors, but the season feels like it is just tiptoeing around everything and setting it up for the next one.

I like that the show doesn’t waste too much time in exposition about the lore, or explaining terminologies. But I think that the geography is still way too muddled for me. I like maps and I like knowing what exactly is where. We hear these names of countries thrown around, and sure, it is easy to imagine that Ravka stands for Russia, and Shu Han (where Alina is from) could as easily be China, while Ketterdam could be Amsterdam, perhaps? But we gotta do it a little better, ‘kay guys?

And finally, while it has mounted itself on a Game Of Thrones scale when it comes to geopolitics and the sheer number of characters introduced by merging two novels and timelines, which is quite ambitious, it sometimes makes me a tad overwhelmed. Like we’re not doing justice to the development of these characters because we’re flitting between them a lot.

That being said, I still think Shadow And Bone had me entertained and invested in the future of these characters, particularly the trio from Ketterdam! There’s oodles of good foundations here, and if what I’ve heard from readers is true, the novels also get better with their storytelling as the progress from the first book to the second and so on. So one can hope that happens with the series too!

With that in mind, here are five reasons Shadow And Bones is worth your time!

5.  You need the escapism to a fantasy realm that has its own problems and heroes who’re solving them

I began watching Shadow And Bone after I had a terrible day, full of rough news from all corners. The world outside is nightmarish, and sometimes, just sometimes, you want an escape. Shadow And Bone engrossed me enough to give me that respite, as most fantasy fiction will do. Because fantasy genre is full of insurmountable, often magical villains. But then, you have Chosen Ones and heroes and brave warriors who save the day. And that’s so reassuring sometimes.

4. In some ways, Shadow And Bone is a combination of Harry Potter and Game Of Thrones, but with scope for more political detailing

I am a sucker for the fantasy genre, and there’s a Game Of Thrones-shaped hole in my heart that I’ve been waiting for something good to fill. And Shadow And Bone surely has the potential to do that because it kinda feels like it is mixing two of my favourite fantasy series, Harry Potter and GoT. In fact, Zoë Wanamaker, who played Hogwarts professor Madam Hooch (Quidditch!) is pretty much a stern mentor at the Little Palace, which is like Hogwarts for Grisha! 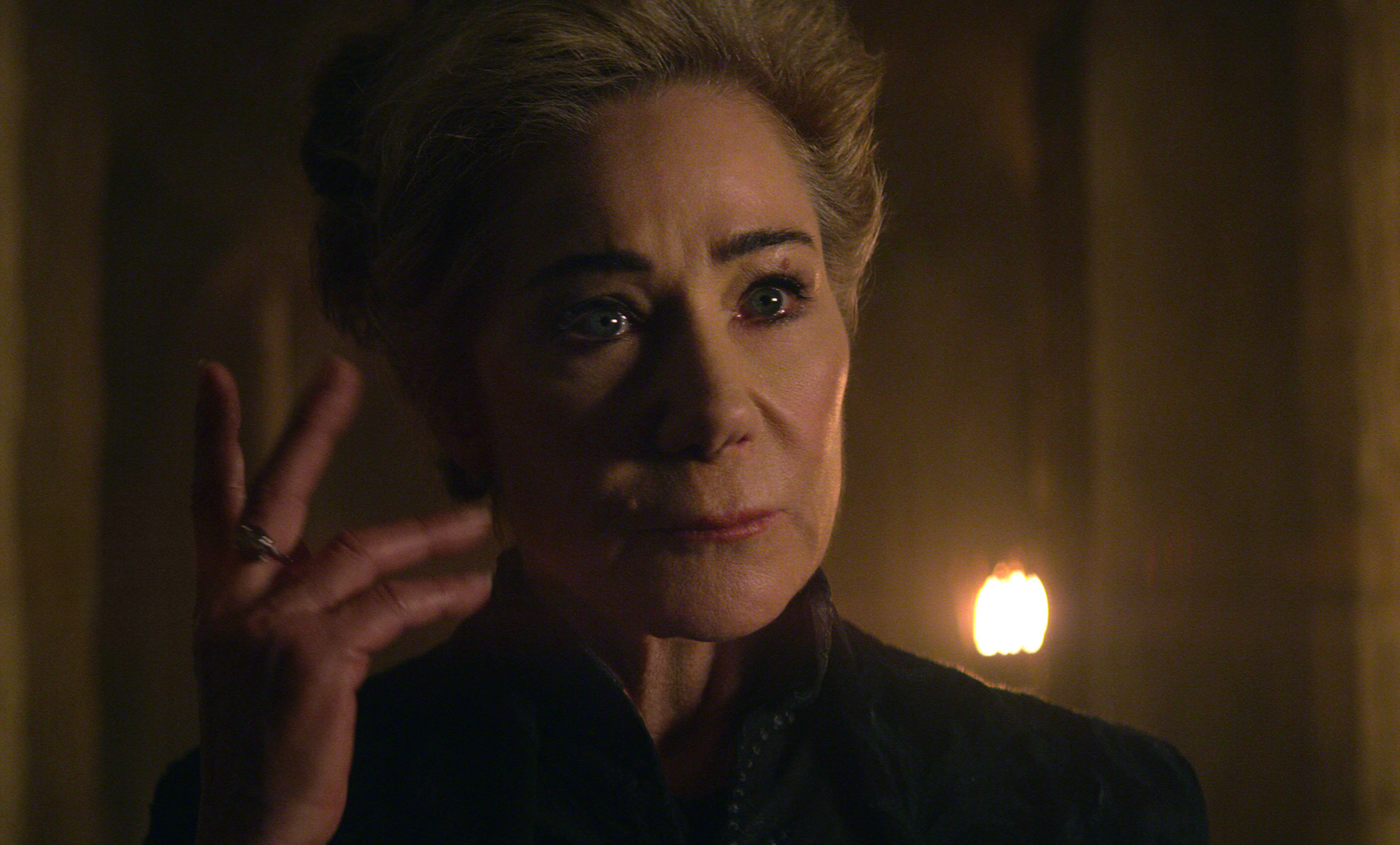 What’s also interesting is the geopolitics in the story, which leaves it open to explore themes like racism, displacement, refugees, war, religious fanaticism and so on. There are different countries, each with their own language, currency, culture and governance. I did feel that the show could do a better job enhancing this diversity, or shedding more light on these societies,  the position of women in them, and the racism and classism rampant in them to better supplement the motivations of these characters. Nevertheless, I hope this happens in future seasons!

3. Because you should always say yes to female characters that can whoop ass!

From what I’ve gauged from book readers who’ve watched the show, Shadow And Bone has a lot of badass female characters, who aren’t always white or black. There’s Zoya, the Mean Girl-turned-ally; Nina, who is kind of pulling a Ygritte with her Fjerdian Jon Sonw, Matthias Helver; and even the swashbuckling wraith, Inej, who is one of my favourite characters so far!

I am still waiting for our Sun Summoner, Alina, to turn up that firepower but also really go dark. I think she shone brighter when she was giving up that childhood innocence of her and gravitating towards the dashing but dark and mysterious, General Kirigan. And I hope we get to see more of that!

2. The trio of Freddy Carter, Amita Suman and Kit Young 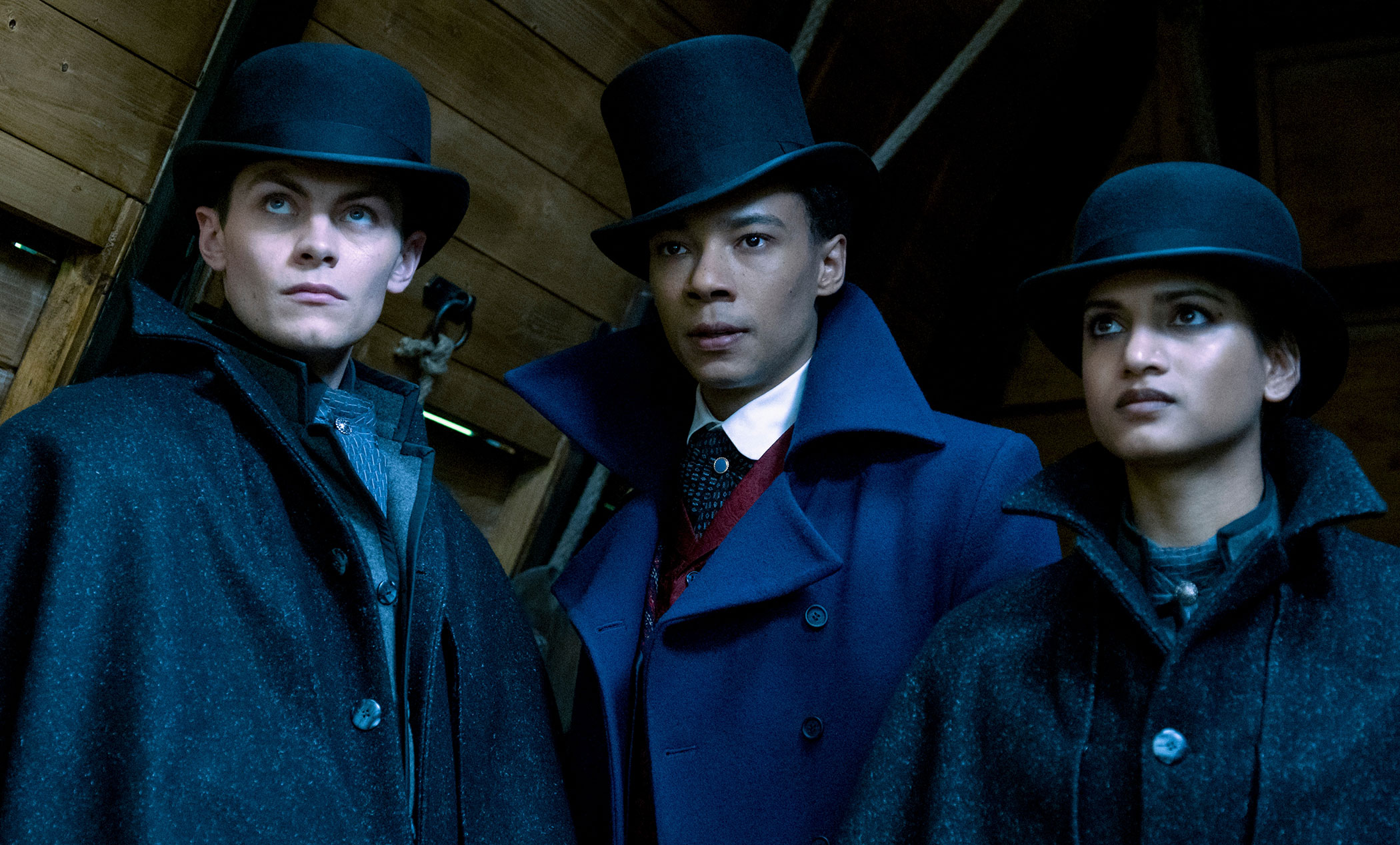 Okay, I would like Kit Young’s stylish, gun-trotting queer Jesper to be my BFF! His presence on screen in electrifying, that man is so darn smooth! Watch out for his camaraderie with a goat called Milo, and how it transforms a high-octane scene into such good television! Freddy Carter as Kaz Brekker, too, has quite the presence and ever since his entry, with that cane, began their story, I’ve been more invested in it than Alina’s. Now there’s a slowburn romance between Kaz and Amita Suman’s Inej as well, but yo can see the difference when you compare it to the one between Alina and Mal. Or maybe I am just a sucker for darkness and pain. Sigh.

I don’t care if you call me biased. Have you met Ben Barnes? I have had a crush on him since he played Prince Caspian in the Narnia films. And with Shadow And Bone, it was literally like Queen Susan’s horn calling me back home to my love for Ben Barnes (geddit?)! The man glides into every scene as if it is playing in slow-mo, like he was meant to play powerful, royal characters. I think his outfit choices gave away his future bad boy revelation, but I still enjoyed every bit of that intense flirting he had going on with Alina. 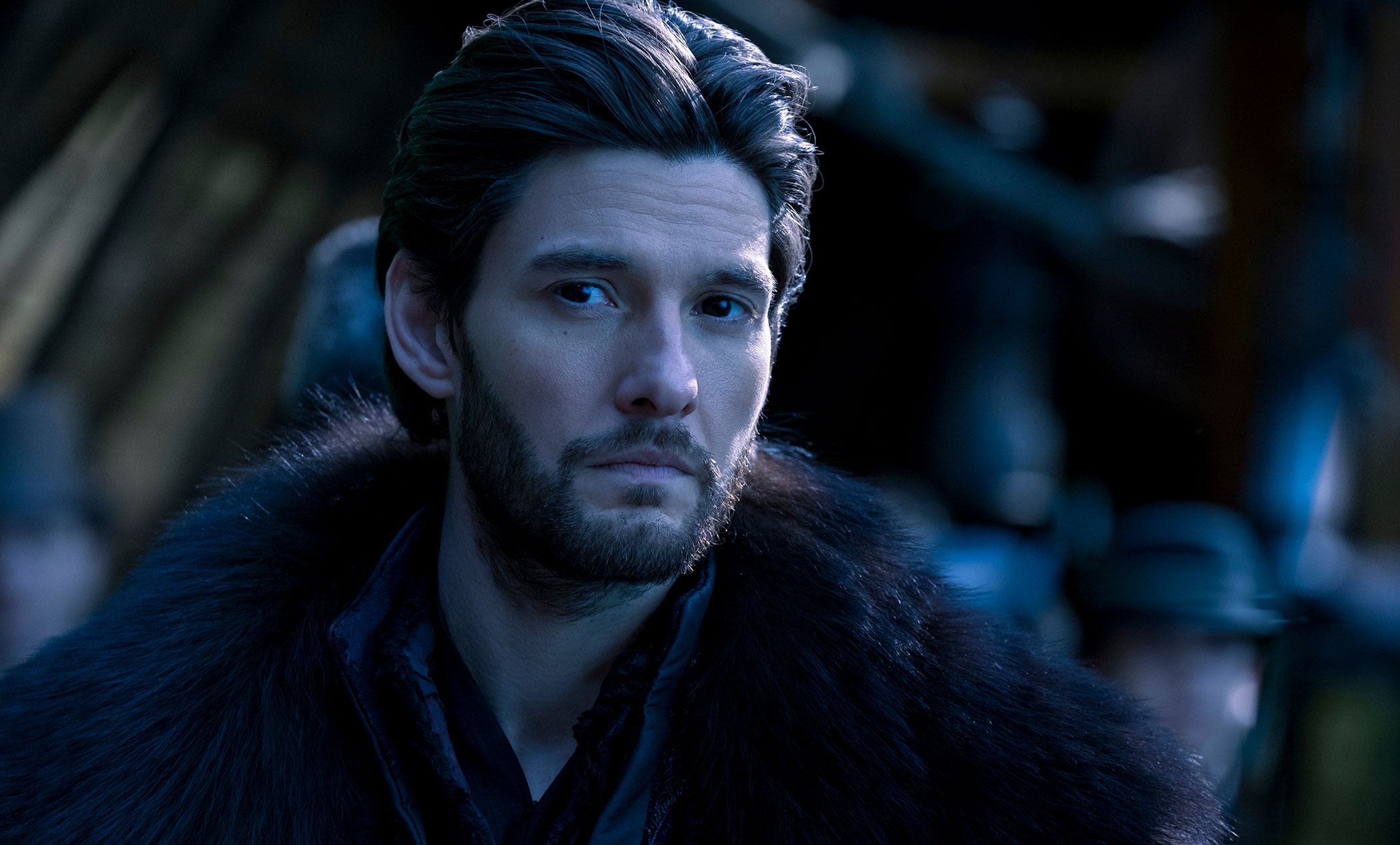 Once again, his slightly one-tone character (in the show, not the books) gets its layers thanks to Ben Barnes’ portrayal of him. Barnes brings this delectable silkiness to his character of General Kirigan aka the Darkling. In fact, there’s one particular dialogue he says, ” Make me your villain,” and every fibre of my being that loves fictional bad boys just melted into a blob on the floor. I would totally cross The Fold for this man.

So, will you be watching Shadow And Bone this weekend? Let me know what you think!

Remembering Irrfan Khan: 7 Movies Where His Character Had A Beautiful, Supportive Relationship With Women