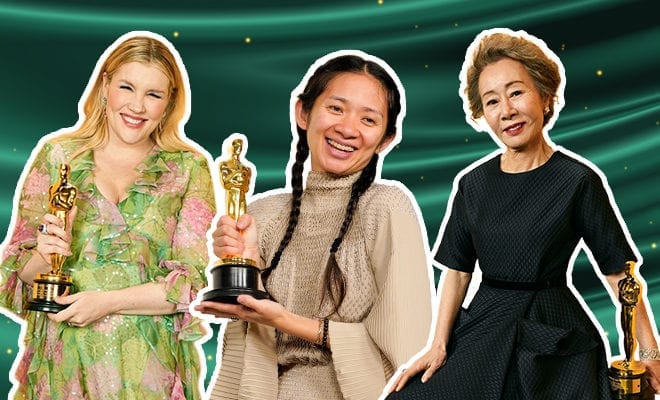 For many, it’s weird that as an Indian I care so much about the Oscars to wake up at 5:30 am and watch them live. But since the Hollywood does seem to be the gold standard for setting trends and benchmarks, and if it was going to hand out the golden statuette to such a diverse deserving pool of nominees, I wanted to be there for it, you know? Hostless, its usual venue and guests-less, and with red carpets set up across the globe—UK, Australia and of course Los Angeles—the 93rd Academy Awards were not their usual spectacle. But what makes this one special is the Oscars winners’ list. It had some history-making women written all over it—from Chloé Zhao, who became only the second woman in 93 years of Oscars to win a Best Director award for Nomadland, to Yuh-jung Youn, who is the first Korean and the second Asian woman to win an acting Oscar, for Best Supporting Actress for Minari.

While these two were frontrunners and some of the more obvious wins for the night (or our morning), there were other women who also made history in their own way by taking home an Oscar. Let’s celebrate these sisters, shall we?

Here are all the women that won at the 93rd Academy Awards and some who’ve gone on to make Oscars history!

It’s a bittersweet feeling that in the Academy Awards’ 93-year-old history, only two women have bagged the Best Director honour. And Chloé Zhao, who wins for Nomadland, wins the honour after more than a decade of Kathryn Bigelow’s win for The Hurt Locker. But that’s not all that Zhao has accomplished.

With her win, Chloé Zhao becomes the first Asian woman, the first woman of colour to win a Best Director Oscar. And with Nomadland winning the Best Picture Oscar, it’s a double whammy! As a fellow woman and someone who was rooting for (and predicted) her win, this feels incredible!

Here’s hoping that more women get nominated every year from hereon, and win too!

Other than the fact that she was brilliant as Fern, the nomadic, van-living protagonist of Zhao’s Oscar-winning Nomadland, I wanted Frances McDormand to win because her speeches are so good! If you remember the “Inclusion Rider” one from her previous Best Actress win for Three Billboards Outside Ebbing, Missouri, you’ll know what I am talking about.

With her third acting Oscar win (she won a Best Actress for Fargo in 1997), McDormand joins an illustrious club of actors like Meryl Streep, Jack Nicholson and Daniel Day Lewis, who each have three acting Oscars. They’re all right behind Katherine Hepburn, who has four.

Emerald Fennell is a promising young woman indeed! The filmmaker, who’s directorial debut Promising Young Woman was nominated for five awards, including Best Picture, Best Director, and Best Actress, just won the Oscar for Best Original Screenplay! This makes her the first woman in 13 years to win this honour!

You may or may not know much of Yuh-Jung Youn besides her acting credit for Minari, but the Korean actor has had a decades-long career in Korean cinema. She has had quite a clean-sweep this awards season, and now she’s managed to bag an Oscar for Best Supporting Actress for Minari too!

This makes her the second Asian performer and the first Korean actor to win an acting Oscar!

It also doesn’t hurt that we’re all kinda jealous of her since she got presented the award by dreamboat Brad Pitt, and got to walk off the stage on his arm! Ah, and her speeches are always gold!

Ma Rainey’s Black Bottom is a special film for many reasons. For one, Viola Davis scored her fourth Academy Award nomination for the film, making her the most nominated Black actress in Oscars history. The film was also the late Chadwick Boseman’s final, and he has been sweeping posthumous awards this season for his incredible performance in the film that is close to all our hearts.

And now, two Black women, Mia Neal and Jamila Wilson, have added another laurel to their own and the film’s cap by becoming the first Black women to win Oscars for Makeup and Hairstyling!

It’s always a history-making day when women are recognised for their amazing talents. So even if H.E.R winning the Best Original Song for “Fight For You” from Judas And The Black Messiah didn’t exactly break records, I think it is worth celebrating this landmark film and H.E.R win!

A post shared by Judas and the Black Messiah (@judasandtheblackmessiahfilm)

Written and directed by Anthony Giacchino, and produced by Alice Doyard, Annie Small and Aaron Matthews, Colette won at the 93rd Academy Awards for the Best Documentary Short.

Colette tells the story of 90-year-old former French resistance member Colette Marin-Catherine who, along with a young history student Lucie Fouble, visits the Nazi concentration camp where her brother was murdered during the war, 74 years later.

Judas and the Black Messiah

The Trial of the Chicago 7

Thomas Vinterberg (Another Round)

Vanessa Kirby (Pieces of a Woman)

Sacha Baron Cohen (The Trial of the Chicago 7)

Kemp Powers (One Night in Miami)

Aaron Sorkin (The Trial of the Chicago 7)

The Man Who Sold His Skin

A Concerto Is a Conversation

A Love Song for Latasha

If Anything Happens I Love You (Winner)

Also Read: It’s Oscars Weekend! Here’s A List Of Films To Watch And Cheer For All The Incredible Women Nominated!

Dariusz Wolski (News of the World)

Phedon Papamichael (The Trial of the Chicago 7)

The Trial of the Chicago 7

The One and Only Ivan

“Hear My Voice” from The Trial of the Chicago 7

“Fight For You” from Judas and the Black Messiah (Winner)

“Husavik” from Eurovision Song Contest: The Story of Fire Saga

“Speak Now” from One Night in Miami