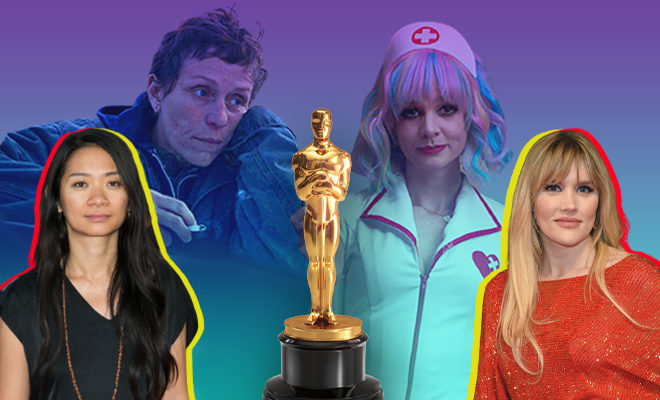 Ladies and gents who love the movies, it is time for the Oscar noms! Now there are multiple reasons you ought to be interested in this year’s Oscars and their nominations announcement. For starters, our very own desi girl Priyanka Chopra and our national jiju Nick Jonas were tasked with presenting the Oscars 2021 nominations, which they did, dressed in a blue gown and a bright yellow suit, respectively. I was expecting some more fun banter, since there must’ve been a reason to have one of the hottest couples do it, but well. However, my biggest takeaway is a rather bittersweet one. Nomadland director Chloé Zhao and Promising Young Woman director Emerald Fennell have been nominated in the ‘Best Director’ category for the 93rd Academy Awards.

And with that, they become only the sixth and seventh women directors in the Oscars’ more than nine-decade-long history to be nominated for this category. You get the bittersweet now? I’m proud of these ladies for their achievements but it is hard to not look at it from a gender lens, and harder to think that in almost a century, only five women directors were deemed worthy of this honour.

The Oscars began in 1929, when they weren’t even ‘Oscars’ but just the Academy Awards, until 10 years later, when they got this popular moniker. But it wasn’t until 1977, almost half a century after its inauguration that a woman was nominated for Best Director. That woman was Italian director Lina Wertmüller, earning her nomination for Seven Beauties.

It was another another decade and a half before Jane Campion got nominated for The Piano, a New Zealand period film, in 1993. Then on, only three more women filmmakers got nominated—Sofia Coppola in 2004 for Lost In Translation, Kathryn Bigelow in 2010 for The Hurt Locker and in 2012 for Zero Dark Thirty, and Greta Gerwig for Lady Bird in 2018. As of 2021, of these five women, only Kathryn Bigelow has won a Best Director Oscar.

Gerwig’s nomination came eight years after Bigelow’s, which doesn’t just point out that the Oscars are slightly more partial to humans of a particular chromosome pair, but also that the entertainment industry has been male-dominated for far too long to allow enough women’s voices the chance to create, and thereby get nominated for awards.

This past year has seen a spectacular rise in content not just about women but by women as well. And yes, for anyone still asking, women don’t just make films and series about women. Both Nomadland and Promising Young Woman are films that have received high acclaim.

In fact, the Golden Globes this year made up for its utter lack of female nominees in the last couple of years by nominating Chloé Zhao, Emerald Fennell and first-time director but full-time award-winning actor Regina King for Nomadland, Promising Young Woman and One Night In Miami, respectively. Zhao won the award.

Also Read: For The First Time, 3 Of The 5 Golden Globes 2021 Best Director Nominees Are Women. Here’s Why It’s A Bittersweet Feeling!

Will Chloé Zhao or Emerald Fennell make history this year at the Oscars and give us a second female Best Director win? I sure do hope so. We would like to not make things so intensely focused on gender in the future. But for now, we need to call out the inequality and hope for some shuffling of the status quo before we can get to that.

You can watch the complete nominations announcement ft. PeeCee and Nick Jonas here.

Minari Review: A Beautiful Film About Family And Belonging That Transcends The American Dream