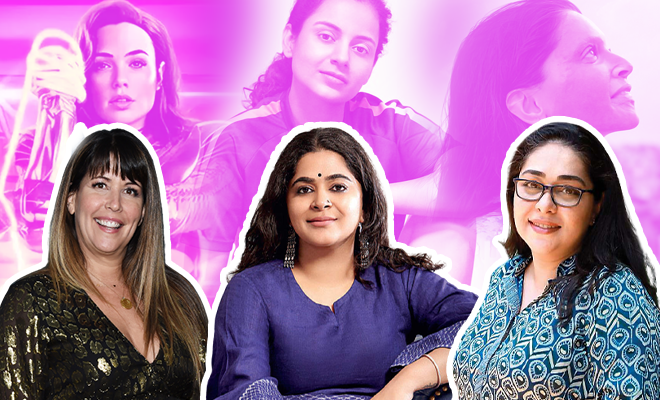 If there’s one field where gender parity is still relatively elusive, it is the movie business. Actresses don’t get paid as much as their male counterparts. They’ve only now started getting meatier, character-based roles and movies that tell realistic stories about women and their issues. Female directors have to fight for pay parity too, just ask Patty Jenkins, who gave franchise builders like Wonder Woman and still had to ‘discuss salary’ for the sequel, Wonder Woman 1984. And female technicians and crew members… well, let’s just say that’s an entirely dark zone for all genders. However, 2020, being the topsy-turvy year that it has been, brought some positive change. According to a study, women directed a record number of Hollywood films in 2020. And since we desis are alway into comparisons, women filmmakers back home didn’t do so bad either.

The study was conducted by the Center for the Study of Women in Television and Film at San Diego State University. It found that in 2020, more than usual, female filmmakers were brought in to direct movies. And mind you, some big budget ones at that. We’re fresh off the release of Wonder Woman 1984, for which Warner Bros. brought back Patty Jenkins, who directed the first film and who is all set to direct a third Wonder Woman film, and a Star Wars film as well. There was also Mulan, directed by Niki Caro, one of the biggest releases from Disney this year, landing itself in controversy over cultural appropriation, much like Wonder Woman.

Also Read: Wonder Woman 1984 Director Patty Jenkins Was Ready To Walk Away Over Pay Disparity. Can We Please Pay Women Their Dues?

Regina King, already our queen on the screen, ventured behind the camera with her acclaimed directorial debut One Night In Miami. British actress and Killing Eve Season 2 showrunner, Emerald Fennel, marked her Hollywood debut with A Promising Young Woman, starring Carey Mulligan. And Lydia Dean Pilcher directed A Call To Spy, a film about female spies in WWII, produced, written and acted in by Sarah Megan Thomas, alongside Stana Katic and our very own Radhika Apte.

Not all the films that were slated for a 2020 release have managed to release though. So while we’ve gotten Birds of Prey by Cathy Yan and Nomadland by Chloe Zhao, the latter’s superhero opus and the crown jewel of MCU’s Phase 4, Eternals has been pushed to this year. Similarly, another highly anticipated Marvel Studios film, Black Widow, directed by Cate Shortland, was shifted from 2020 to 2021.

Despite the shuffle in the 2020 slate, the study found that female filmmakers represented 16% of directors working on the 100 highest-grossing films in 2020. The number may seem small, but it does feel a teensy victory over last year’s 12%, and a grand slam considering it was as low as 4% in 2018!

The study, which evaluates the stats spanning two decades is overseen by the Center’s director Dr. Martha Lauzen. And Dr. Lauzen was keen to point out, “The good news is that we’ve now seen two consecutive years of growth for women who direct. This breaks a recent historical pattern in which the numbers trend up one year and down the next.

However, there’s some bad news with that too. According to Lauzen, “The bad news is that fully 80% of top films still do not have a woman at the helm.” When it came to the numbers on ‘watched-at-home’ movies and the number of women working in other roles like producer, executive producer, writer, editor and even further down the credit line, the results weren’t all that joy-evoking.

In the top 100 highest grossing movies, only 28% women were producers and 21% of them were in executive producer positions. That’s a markedly 2% increase in both categories. Furthermore, women comprised 18% of the editors, 12% of the writers, and 3% of the cinematographers on these movies. While the latter showed a 1% increase, the number of writers and editors saw a drop by 8% and 5%, respectively.

You can see this back home too. Four More Shots Please director Anu Menon’s 2020 release Shakuntala Devi materialised by a team comprising writer Ishita Moitra, editor Antara Lahiri, and cinematographer Keiko Nakahara. Even the music was, in part, written and sung by Priya Saraiya. When asked if it was a conscious decision to hire an all-woman’s team, she said,

“I think because of the kind of stories, or because as a woman helming the project I have a vision, the women understand it better and when they come back with their ideas, they resonate more with me. So inadvertently, it becomes a female-driven team. Having said that, none of us say that we need to be an all-female team. We strive for equality.”

Also Read: Shakuntala Devi Director Anu Menon Talks About Working With Other Women, And How She Answers The ‘Female Director’ Questions

However, another thing that Menon said, and which struck hard, is that stories need to become bigger than gender. Which is true, of course. But to reach there, we’re going to have to achieve that utopian gender parity that is so elusive. As the study’s results clearly indicate, a majority of films, 67%, employed 0-4 women in top tier positions behind-the-scenes. Compare that to the fact that more than 70% of the top films employed 10 or more men as directors, writers, and other top roles, and you echo the words of Dr. Lauzen, “The imbalance is stunning.”

And yet, I want to give 2020 credit where credit is due. The slow year, coupled withe the meteoric rise of OTT has subverted the pressure of Box Office performance and numbers. Cue in women filmmakers and content creators, who’ve had a stellar year entertaining us. They made movies that made their mark on both the big screen and OTT—Panga (Ashwini Iyer Tiwari), Chhapaak (Meghana Gulzar), Dolly Kitty Aur Woh Chamakte Sitare (Alankrita Shrivastava), Shakuntala Devi (Anu Menon), Yeh Ballet (Sooni Taraporevala), Guilty (Ruchi Narain), What Are The Odds (Megha Ramaswamy), Bulbbul (Anvita Dutta), Cargo (Arati Kadav), Soorarai Pottru (Sudha Kongara), and others.

And how can we forget comedy specials like Pushpavalli Season 2 (Sumukhi Suresh, Debbie Rao) or even the most recent, Yearly Departed, a comedy by female comedians, written, directed and edited by women.

Clearly, 2020 has been a stellar year for women directors, both in Hollywood, perhaps internationally, and even back home. However, there’s still a long way to go. If the past couple of years are any indication, women creators and producers do have their fingers on the pulse of the socio-political trends that their audience now wants to see reflected in the cinema they watch. The stakes are high—to entertain and to educate. And these women can clearly do both. The point then remains of gender bias, which impedes their rise in the ranks.

And that is going to take some serious editing to remove.