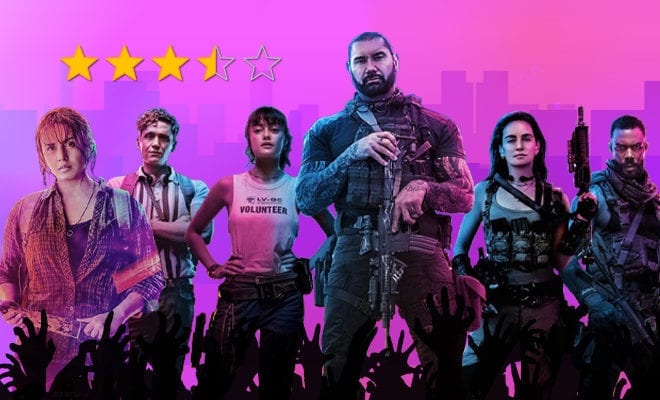 Army Of The Dead Review: Snyder’s Beautifully Made Zombie Heist Film Starring Huma Qureshi Is A Total Blast Of A Bloodbath

For us Indians, there were three pegs that held up our excitement for watching Army Of The Dead, which has begun streaming on Netflix. First, of course, was the most obvious reason—zombies. Lovers of the undead, blood and gore unite! But the fact that this wasn’t just a regular chomper film and was given a heist in Las Vegas angle à la Ocean’s Eleven, made it even more fun. Second was Zack Snyder, who returns to reanimate the genre after Dawn Of The Dead, which was all the way back in 2004. And knowing that with this film Snyder builds quite a bit of fresh new zombie lore that he’ll carry forward in anime-style spin-off series Army Of The Dead: Lost Vegas, is a whole bonus reason to want to watch this film. And then, third and final, of course, is the fact that apni Huma Qureshi stars in the film alongside  Dave Bautista, Ella Purnell, Omari Hardwick, Ana de la Reguera, Theo Rossi, Matthias Schweighöfer, Nora Arnezeder, Hiroyuki Sanada, Tig Notaro, Raúl Castillo, Richard Cetrone, Athena Perample and Garret Dillahunt.

Snyder already had the idea about story for Army of The Dead back when he made Dawn. He has written the screenplay alongside Shay Hatten and Joby Harold. But this is Snyder’s debut as a director of photography. It is edited by Dody Dorn, with music by Tom Holkenberg, production design by Julie Berghoff, costume design by Stephanie Porter, Justin Raleigh as the special makeup effects designer and Marcus Taormina as the visual effects supervisor.

Now, what all of these people have managed to accomplish is a zombie film that is so true to the OG zombie lore that’s out there but at the same time one that builds on it with fresh new material, giving us one of the most beautiful, incredibly detailed, spectacles that I have seen. It’s weird, because I found myself laughing and asking, can a zombie film really be described as beautiful? Well, I think Zack Snyder just pulled it off, guys. And while I do have some major issues with a few other aspects, I still think Army Of The Dead is a bloodbath that is a total blast for what it counts.

What’s happening in Army Of The Dead?

It all begins with a Patient Zero, the alpha zombie, breaking free on the Nevada highway, indicating this might be some major Area 51 secret. We don’t get an origin story, which I suppose is saved for the spin-off series. But that’s okay, because we dive right into zombie apocalypse breaking out in Las Vegas, and mercenaries and US military trying their best but suffering heavy losses, some personal, and realising what’s happening in Vegas needs to stay in Vegas. The United States government reacts to it in the most predictable way possible—by building a wall and turning Vegas into a containment zone. 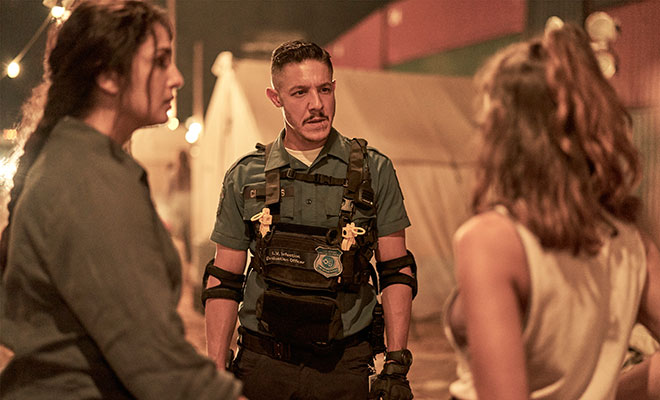 So Vegas is walled in, there are quarantine zones and refugee camps built right outside, and a bunch of temperature gun totting male egos get to decide whether you are a potential infected zombie or can return to your life. That’s where we find Geeta (Huma Qureshi), a disenfranchised single mother who wants to get smuggled into Zombie Vegas with the help of a ranger, Coyote. She wants to try her luck at a few slot machines, so she can get enough money to bail her and her children out of the refugee camp.

Meanwhile Bly Tanaka, owner of the Bly Casino, recruits Scott Ward, a mercenary, to assemble a team that could pull off a heist in zombieland and bring back $200 million from his vault. Motivated by greed and almost $2 million payout per person, Scott finds a team that’s quite enthusiastic. But when his daughter, Kate, a volunteer at the camp who worked with Geeta’s kids, decided to join in to look for Geeta, there’s more at risk.

And, what’s a heist film without some hidden agendas and some unexpected surprises at the other end, right?

About those zombies, the visual effects and why I use the word ‘beautiful’ to describe this film

A film of the stature of Army Of The Dead is obviously a labour of love of a lot of people, and to all of them I want to say, you’ve pulled off something that is visually so dynamic that every frame is enjoyable. The zombies look incredible and even though it took watching the making to understand the different levels of decay reflected in their makeup, it’s easy on first watch to notice the differences amongst the undead. You see, they are not all the same kind of zombies! You’ve got the leader, Zeus, the alphas that he has created, and the shamblers (regular zombies driven purely by hunger).

The costume and makeup departments really have come through with the makeup and prosthetic looks they’ve created, which represents all of what Las Vegas really is, with its entertainers, bachelorette party groups, Elvis Presley impersonators, and high rollers all getting represented in their zombie avatars. And of course, the highlight of them all for me, was the Zombie Queen and the Zombie Tiger, Valentine (yes he has a name!). The latter, of course, was CGI based off of a real white tiger’s motion capture, and they’ve nailed it.

I visited Las Vegas nearly a decade ago, but The Strip isn’t something you really forget. I dig the deconstructed, wasted, decaying Vegas created for this film, but also liked that they kept some major landmarks, like the Statue of Liberty, the Eiffel Tower, and some of the elements of its iconic skyline intact, because there was this map in my head forming of where exactly was the scene happening. A huge kudos to the production team and the visual effects team for their work.

While all of this contributes hugely to making Army Of The Dead a spectacle, I think major credit is due to Zack Snyder and his cinematography, which makes these shots really look ‘beautiful’. He shoots a lot in focus, and has used natural light, and some of the outdoors scenes have this very soft quality. I think my favourite scene is the face-off on the casino floor though. 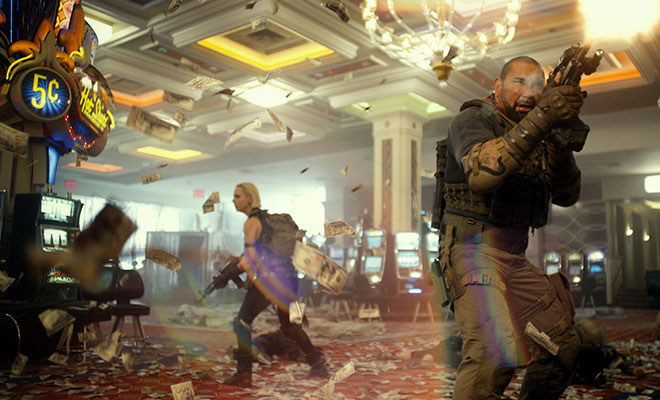 Also Read: Apni Huma Qureshi Impressed Zack Snyder During ‘Army Of The Dead’ So Much, He Wants To Work With India Actors Only!

Zombies have always been the most perfect metaphor for consumerism, and I think greed motivating humans’ most deplorable actions is the underlying theme here. In fact, think of the money in the vault as cursed Aztec treasure guarded by the undead or even as a Philosopher’s Stone that is protected by a Mirror of Erised enchantment. Only those who don’t want it and aren’t motivated b greed may actually have it. I will stop here, without spoiling the end for you.

In these corona times, the locking in of the infected zombies reminds us of Wuhan and what might be a possible course of containment the next time a virus threatens a potential pandemic (yes, this is just the beginning). The wall built around Las Vegas and the refugee camps for the disenfranchised, on the other hand, could also be metaphors for American wanting to build the Trump wall on the Mexican border and the refugees that were born of that decision. 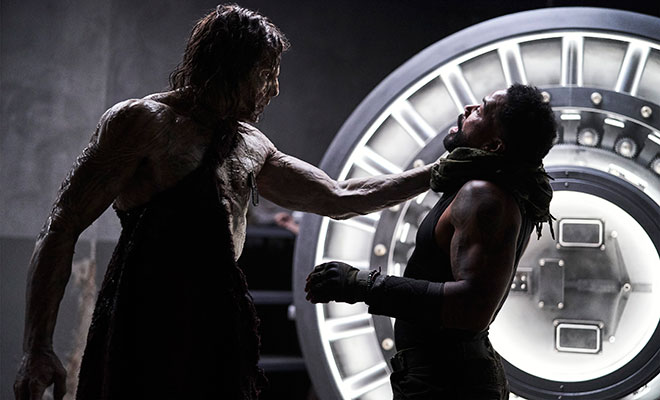 The most interesting though are the zombies themselves and how you’d think the city is turned into this macabre prison where they are left to die. But in reality, they’ve actually sort of built their own little kingdom and are in their own process of ascension to something higher.

Okay, don’t go in expecting that Huma Qureshi is a lead character because she isn’t. Her character is important, and substantial enough for what it’s worth. And Huma does a pretty decent job, with no accent issues that might turn you off. Though it does beg the question why Snyder had said that the role was written as an Asian/Indian character.

Also Read: EXCLUSIVE: Huma Qureshi On ‘Maharani’, The Simplicity Of Rani Bharti, And Telling Women’s Stories In A Man’s World

So why do I still dock those points?

The film kills with its action, where most of its actors, including Dave Bautista, ‘perform’ and excel. I love that most of the female characters are such badasses—Coyote, Maria, Marianne, Chambers, and even Kate. But the film doesn’t exactly offer much in way of emotional performances. I didn’t exactly find myself rooting for or getting invested in any of the heist team members, except perhaps Dieter. I did kinda think it was stupid for Kate to go into zombieland to find Geeta, because what if she died too and the kids were left with absolutely no parent or caretaker at all?! But okay, I get it, stakes. 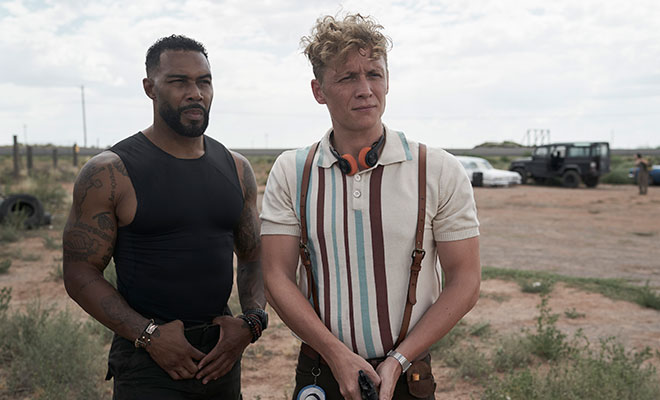 My biggest problem with Army Of The Dead, which dampens the otherwise fun ride we’re on is that it builds up and builds up but doesn’t really crescendo. There was no particular climactic moment that blew my mind (pun intended) or made me sigh at the visuals in front of me. It reached a certain level and then it was just more of the same, until the final helicopter scene of course, when the unexpected twist was something that I really liked.

Army Of The Dead is an out-and-out zombie fest, which you’re absolutely going to enjoy. It doesn’t hold back on the blood and gore, which I realised a little too late as I began watching it while eating lunch! Zack Snyder and team throw in almost every stake possible in it—from heists, to a ticking timer, to family and emotion, even for the zombies. And despite a few shortcomings, the film’s visual storytelling and attention to detail and lore is what does it for me. Definitely do not miss!

Army Of The Dead is currently streaming on Netflix.