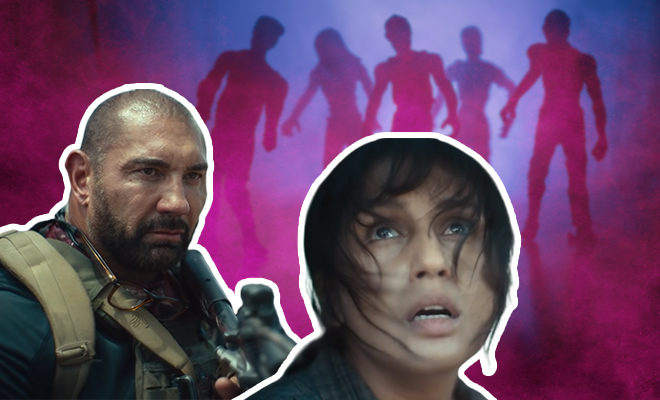 Hey Huma Qureshi, We See You In Zack Snyder’s Army Of The Dead Trailer, And We’re Excited For This Zombie Heist!

Call me an enthu-cutlet but even now, after we’ve had so many Indian celebrities traverse borders and become global stars, if I see an Indian actor in Hollywood, I freak out with excitement and pride. I mean, Priyanka Chopra working with Sam Heughan (Outlander crush’), Dimple Kapadia with Robert Pattinson (teenage crush) or Anil Kapoor with Tom Cruise (who had me at hello)…. It feels like I am living my brown girl dreams vicariously though them! And now, another of our own, the lovely Huma Qureshi will be seen in Army Of The Dead, directed by Zack Snyder.

In fact, the Army Of The Dead trailer just dropped on Tuesday and even though it’s a blink-and-you-miss glimpse of Huma in it, it got me super pumped for the film! She tweeted about the trailer.

Super proud to be a small part of this genius man’s vision @ZackSnyder always a fan and friend forever ❤️ https://t.co/Pan4QyJTBM

What’s The Army Of The Dead about?

As per the film’s official synopsis, “Army Of The Dead takes place following a zombie outbreak that has left Las Vegas in ruins and walled off from the rest of the world. When Scott Ward (Dave Bautista), a former zombie war hero who’s now flipping burgers on the outskirts of the town he now calls home, is approached by casino boss Bly Tanaka (Hiroyuki Sanada), it’s with the ultimate proposition: break into the zombie-infested quarantine zone to retrieve $200 million sitting in a vault beneath the strip before the city is nuked by the government in 32 hours. With little left to lose, Ward takes on the challenge, assembling a ragtag team of experts for the heist. With a ticking clock, a notoriously impenetrable vault, and a smarter, faster horde of Alpha zombies closing in, only one thing’s for certain in the greatest heist ever attempted: survivors take all.”

A zombie heist movie with a zombie tiger? Bring. It. On!

Also Read: Huma Qureshi Talks About Body Shaming And It’s Like She Has Stolen Words Right Out Of Our Mouths!

The film has quite the laden cast too. We get to see (yes he isn’t invisible here) Dave Bautista, who we’re fond of as the hilarious Drax from Guardians of The Galaxy, in a more serious, intense role. And he’s leading a team that comprises actors like Ella Purnell, Omari Hardwick, Ana de la Reguera, Theo Rossi, Matthias Schweighöfer, Nora Arnezeder, Hiroyuki Sanada, Tig Notaro, Raúl Castillo, Samantha Win, Michael Cassidy, Richard Cetrone, Garret Dillahunt and of course, our very own Huma Qureshi!

While her character details are still not revealed, what we do know is her name, Geeta! And another surprise? She actually credited Abhishek Bachchan for shooting an ad film with her that led her to this point!

Thank you sooo much🙏🏻🙏🏻 Means a lot .. and it all started only coz you decided to shoot that one advertisement with me years ago 🤓😊 https://t.co/SqeMDyUB3X

Directing the film is Zack Snyder, who is fresh off the astounding success of the Justice League Snyder Cut, and ready to dive into zombie films after nearly 17 years, since Dawn Of The Dead in 2004. The film is based off a story that Snyder wrote, which he then developed into a script along with Shay Hatten and Joby Harold. The film was stuck in developmental hell for years before Netflix picked it up. And now, Army Of The Dead is slated to be the beginning of a franchise that will span a prequel and an anime series.