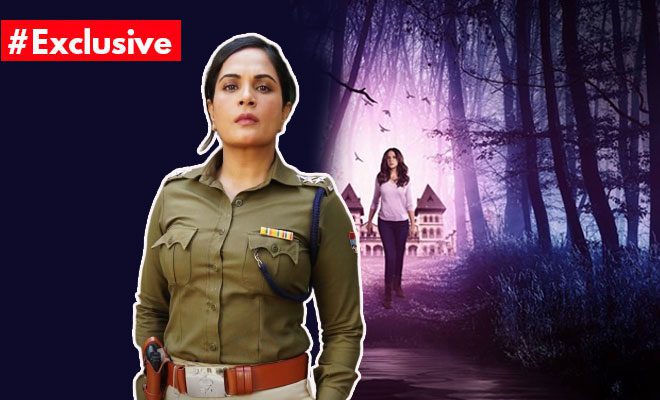 Exclusive: Richa Chadha On Playing A Cop In ‘Candy’, The Unexpected Twist Audience Can Expect, And More

If you’re dreading the existential crisis that might dawn upon you now that you’ve probably binge-watched the new Money Heist season, then don’t you worry. There’s another series, a surreal murder mystery with tinges of horror, set in mountainous small town India, is ready to grab all your attention. Candy, a new series on Voot Select, is directed by Ashish R Shukla and stars Ronit Roy, Richa Chadha, Manu Rishi Chadha, Gopal Datt Tiwari, Nakul Roshan Sahdev and Riddhi Kumar, amongst others. The premise, from the trailer, looks pretty interesting. When a kid from the town’s famous boarding school is found murdered, suspicions arise on whether the killer is a person, a creature, or a demon that has been believed to be haunting those hills for years.

But Candy not just a murder mystery, you see. The series explores themes of politics, power, and drug abuse in youngsters. And it becomes a real sinister tale of secrets in every one’s closet threatening to expose who they really are. While Ronit Roy plays a school teacher with his own troubled past, Richa Chadha plays the investigating officer, a DSP, on the case.

Me? I love these small-town murder mysteries that shake up its serenity, and expose the more darker shades of humanity. Which makes Candy a delicious treat that is worth indulging in. What convinced me even more is my conversation with Richa Chadha, who talked not just about her character, but also hyped up the twist that you can expect to be unexpected! Richa also shared about her own views on this ‘content race’, what excites her as an artist today, her new project with Ali Fazal, and more in this chat! Go ahead and unwrap it!

Q: What appealed to you the most about Candy?

A: It was the story line and the script because it had elements of horror and surrealism along with it being a thriller, which I thought was interesting. The writers were able to bring in various kinds of layers into the show, and that’s why I was quite convinced that I’d enjoy working on this.

Q: Can you tell us something about your character DSP Ratna Sankhawar?

A: From the trailer, you might’ve figured that DSP Ratna Sankhawar also has a past and a secret of her own. This Rudrakund posting is a punishment posting for her. She’s been sent to this really small hill station a few years before the events of the series. And she is still trying to figure out how to het around the city and is getting settled in. Ratna is also a single mom of a really tiny toddler, and she’s just trying to do a good job while keeping the local politician at bay and not ruffling any feathers.

But then, at a famous boarding school is the city, murders start to happen. And then it becomes her job to find the killer, which, as you see her say in the trailer, she is determined to do.

Q: Was there any particular kind of prep you did to play cop?

A: Yes! You know, the writing for these kind of characters can be pretty uni-dimensional. It’ll be very black-and-white; either a very corrupt cop or a very honest one. But Candy had several layers to its characters and I found that interesting.

I met with a few policewomen just to understand what their daily lives are like, what their struggles were like.

Talking to them was quite an eye-opening experience because you realize that they also have to worry about ghar ka kaam and whether their children are studying properly or not. When I met them, the lockdown was still on. So, many of them had to leave their phone at home for the children and then they were worried that they couldn’t monitor their kids’ studies. It was quite a tough time for them, and their stories were really something.

Also Read: Thoughts We Had About Richa Chadha’s ‘Candy’ Trailer

Q: How was the experience of working with Ronit Roy, the rest of the cast and crew?

A: I had most most of my scenes with Ronit [Roy] and Nakul [Sahdev], apart from the other actors in the show that were playing really important characters.

And it was a great experience! Nakul, who plays Vayu, brings a lot of new, restless energy that had to be tamed and controlled, which worked very well for our dynamic.

And as far as Ronit was concerned, I was quite surprised to see that even though he’s very successful actor and a big star, people are very fond of him and he has a huge fan following, he still wanted to improvise, rehearse, ad-lib. Those were really interesting things to observe, because normally, with a lot of senior actors, you get a sense that they just want to get it over with. But here everyone was committed to getting their parts right. I think the atmosphere was quite competitive and nice.

Q: Any memorable BTS moments you can share with us?

A: Oh we almost had an accident during a very difficult driving scene. We almost lost control of the car and were almost on our way to sort of a tumble off the cliff. That was really scary!

Q: As an actor, what excites you the most about the current trends in the entertainment industry?

A: It’s an exciting time in general for content creators because there’s more emphasis on writing, creation and direction, than on stars. first. The script has become very important. It’s the big writers and directors that are so busy now that they will not give you dates for years, which is kind of refreshing.

Otherwise, before, everything was structured in such a way that the focus was completely on only actors and big stars. And now I think it’s slowly opening up, especially when good shows come online. It forces even the writers of films to up their game and to be better because people have gotten used to, maybe superior quality writing.

Also Read: Richa Chadha Says She Isn’t Scared Of Being Vocal About Issues, And It Hasn’t Impacted Her Professional Life

Q: What kind of a consumer are you? Do you sit and binge watch at a go or do you prefer savouring one episode at a time?

A: I hate the word consumer! I’m an artist, and I don’t want to be consumed by the people that are watching me. I want an audience. Similarly, when I watch somebody else’s or film, I want to ‘watch’ it. And I want to enjoy it. This term ‘consuming content’, I now see even lay people using it, and it’s a disturbing trend to say people are ‘consuming content’ as if it were Dal chawal, you know?

Q: What can the audience expect from Candy?

A: A really good twist. It’s really not going to be anything that people expect!

Q: The tagline for the show is ‘Unwrap the sin’. What is your favourite sinful indulgence?

A: I think there are days when if I have worked very hard, or if I have had a lot of things on my social calendar, my only imdulgence is to just lie down, read a book or look out at the sky, and literally do nothing.

That is a great way for me to pass the time and it gives me time to relax my brain, to sort of come up with new ideas and be creative.

Q: You’ve recently worked on a podcast with Ali Fazal that is a thriller series too but audio! How was that experience of recording a podcast and working with Ali on it?

A: I loved it! Ali and I have been friends from theater. When another friend of ours called us because he was producing this podcast series, I thought it would be a really good idea. And Ali is just a dream to work with. Even though we were living together, we read our scripts and we did our own preparation, then we went and recorded the podcast, which is just like an audio play.

It’s kind of reminiscent of our theater days because it’s like a radio play, you telling the story using only your voice. I really enjoyed working with Ali on this and I hope we can move on from just audio to audio-visual!

Q: Since 2022 is only 4 months away, what are your hopes for the coming year?

A: I really hope that we can be better people because the world is a very bleak place right now. People think it’s okay to keep recording instances of hate and not step in to help anybody. We’ve seen a lot of tragedy, and 2020 taught me that even though the world was facing this big curse of Corona together, it didn’t really bring them together. They were not united, and that is very disheartening. If we can’t be united, everything is going to get difficult. So I really hope in 2022n we can recognize the humanity in each other.

Candy will be streaming on Voot Select from September 8, 2021.

“Shehnaaz Gill Is Not Fine,” Says Her Father Post The News Of Sidharth Shukla’s Demise