Richa Chadha Says She Isn’t Scared Of Being Vocal About Issues, And It Hasn’t Impacted Her Professional Life 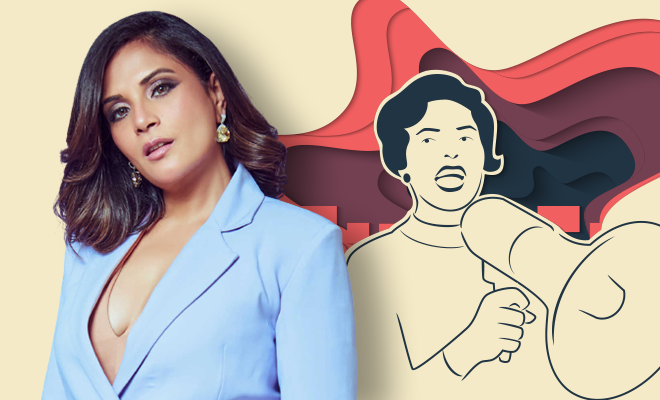 There’s no denying that we hold celebrities to a much higher standard. Because they live their life in the public eye, people expect certain things from them. Which is why, when most of them didn’t speak up for the farmer’s protest, it didn’t sit well very well. However, there are a few celebrities who are always ready to call out the bullshit. No, I am not talking about Kangana Ranaut. She can only fuel a fire, not pacify it. I am talking about celebrities like Richa Chadha who, in a world full of diplomatic people, see how important it is to use their influence and address issues that need addressing. She keeps it real and we love her for that.

Richa Chadha is honestly one of my favourite celebrities. Not only because I love her movies but also because she’s bold and that makes her a force to reckon with. Every time there is a problem that needs to be talked about, she’s there and she’s isn’t afraid to pick a side. A lot of people might argue that celebrities don’t speak up about issues like the farmer’s protests because they are afraid to state an opinion and face the consequences. But in a recent interview, Richa said she isn’t scared of speaking her truth. She’s fearless.

In the interview, Richa said, “It happens all the time. I feel what happens is, most people, they are so guarded in their own private lives, ki ‘kuch bol diya toh kuch ho jaayega’. I simply feel that if I am telling the truth, I should not be afraid. I don’t mean bad, or mean to hurt or insult anybody.”

Clearly, though, not a lot of people from the industry see eye to eye with this philosophy of hers. They are probably afraid it might hurt their career or they might get trolled or even threatened. It happens more often than we know. But when Richa was asked if her social media activism ever backfired or came in the way of her career she said, “I don’t think there’s been any impact professionally. Personally, I do feel what happens sometimes is I am held to higher standards than others, that’s the flip side. People expect me to be that, and at times are like ‘we didn’t expect this from you, we wanted better from you’. There is the burden of those expectations.”

Richa also talks about how she’s gotten plenty of advice from people to not be so vocal about things. I don’t see why it’s a bad thing that she is using her position of influence to make a difference. Being a celebrity comes with a huge fan following and why shouldn’t she use that to make this chaotic world a little better?

Another reason I really admire Richa is that she picks movies that have strong female characters. However, movies like those are often not considered mainstream cinema and stuffed into a second-class genre of their own. This makes it difficult for more movies like those to be made. In the interview, when she was asked whether terms like ‘female-centric’ or ‘female-led’ terms bother her, she said, “I don’t think about these labels any more. People will use them till they need to use them. Till female-centric films are more common and are made every now and then, I think these things will continue, I don’t really feel too much about it.”

We love her for always being so candid and real.