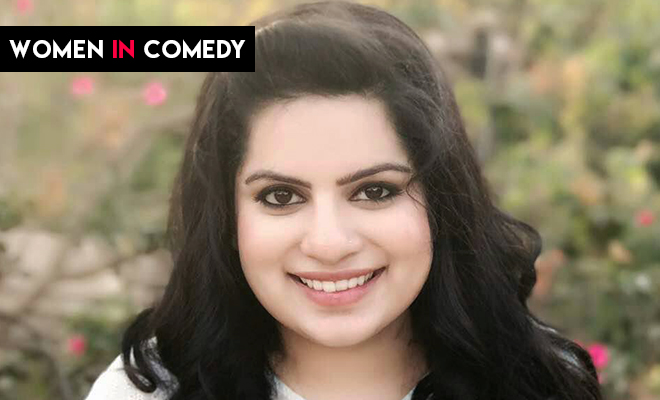 Mallika Dua: “Our Attention Is Finally Going Somewhere Other Than Bollywood Or Cricket!”

Comedy probably seems like the easiest, most fun career to be in. But this is far from the truth.

The gift of the gab, the ability to make people laugh, and to make a living out of it, is a lot harder than it looks. And being a woman in this space — even harder. Which is why these hilarious women we’ve featured in our Women In Comedy series this month deserve your applause. They’re smart, they’re sassy, and they’ll leave you in splits. Read on about how comedy happened to them.

A fairly familiar face on the block when talking about comedy in India, Mallika Dua needs no introduction. You’ve seen her in so many avatars, laughed at how ridiculously relatable her characters are, and applauded her for her impeccable comic timing.

After getting her degree in theatre from the U.S., Mallika worked in advertising as a copywriter with clients such as Dominos, Aircel, and predominantly Dabur, a brand she explicitly describes as, “working for Doordarshan in the era of the internet”!

Whether you’ve watched her debut video, Shit People Say: Sarojini Nagar, or seen her channeling her various alter-egos on Snapchat, such as Makeup Didi & Shagun Didi, or even spotted her as Nazia on the recent web-series, The Trip, you KNOW that pretty much anything Mallika does will leave you in splits.

Calling her life a string of embarrassing moments, Mallika talks to Hauterfly about the muse behind her comedic madness, the division of the industry in India, and basically everything that tickles her funny bone!

It all truly began at home, when I used to have the most nonsensical conversations with my father, who is hilarious. My dad was always the good cop at home and, since I am the youngest, our interactions wouldn’t be serious at all, as there was nothing serious to talk about.

When I went to college in the U.S., during my 3-month-long summer break, a bunch of us would put up these plays and I would perform. That’s when my talent got direction. Our director allowed me to rewrite my lines and perform whatever I thought was best on stage.

I would get an insane, fierce energy from the audience that would make me perform even better. That’s when I realised that comedy is what I love doing, and people love to watch me do it. However, since I am very cynical, I really didn’t think I could make a living out of it.

After 3 years in advertising, I had no intention of pursuing acting or comedy. Back then, I used to watch AIB videos and think “they’re so talented, they’re the lucky chosen ones” — the internet Indian comedy scene hadn’t exploded yet, so I told myself that I really needed to keep it in my pants and deal with reality.

While still in advertising, I did the Sarojini Nagar video, my first, which did really well, and then suddenly a bunch of creators reached out to me. That was the first time I entertained the thought of moving to Mumbai.

Through Tanmay, I met with Vijay Nair and this whole new world of comedy opened up to me, and I was like “what the fuck am I doing with my life?!?!”. That’s when I had a little faith. Maybe I didn’t have to keep it in my pants  — I had kept it long enough and now I needed to explore.

I haven’t followed the conventional stand-up comedy path — it wasn’t like I was at it constantly for years. My progress and struggle was different from what others faced, so I never faced any gender bias. Which is not to say others don’t face it, but women in Indian comedy is too niche. There are only 10 or 12 of us, and I don’t think we’re being stopped or held back.

Two or three men have played the main role in empowering me and getting me places, starting with Tanmay and Vijay. I’ve never faced a problem.

I have just one criteria behind my content —  if it makes me laugh, then it’s worth doing. Whenever I perform my characters/caricatures, both men and women appreciate it. So, I have to be honest, being a woman in comedy in our country has not been an issue, at least for me.

As for comedy in India, there are 2 sides to it – one is a beautiful, prosperous side on the internet, which is growing, and then there’s the other side on TV, which is just degenerating every day. Honestly, right now, literally the only wonderful thing in comedy on TV is Sunil Grover!

The biggest problem with comedy in the country is actually the reception of it. It’s ridiculous how political parties like the MNS threaten comedians. But generally, I think it’s a great time for us, because our attention is going somewhere other than Bollywood or cricket!

Current projects: My body…I am working on making it stronger, because I get a lot of aches and pains since I don’t move! Besides that, a bunch of things — 3 web series, a bunch of branded assignments, writing my own stand-up set, and hopefully sketches on my YouTube channel.

I don’t operate in a hurry because my dad has always taught me that you have to aim for a 30-40 year-old career and you have to pace yourself for a really long time. So currently, that’s what’s in the pipeline!