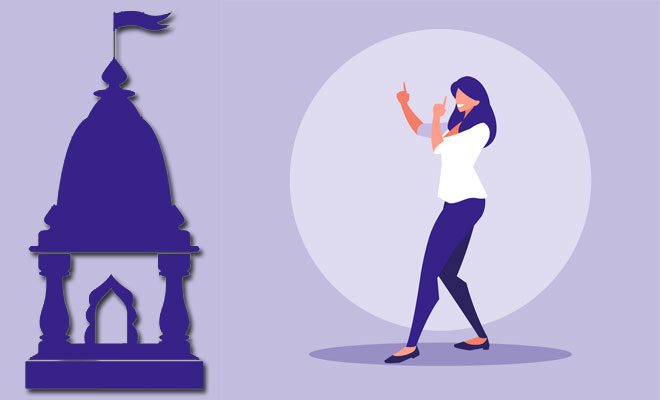 Woman Booked After Videos Of Her Dancing Outside Temple Go Viral. What’s With Doing Stupid Stuff For The ‘Gram?

One of my favourite ways of passing time is scrolling through social media, especially Instagram. I mean, where else can you see people doing absolutely ridiculous and stupid things to gain followers. Wait, don’t answer that, I know there are too many platforms for it. Coming back to Instagram, I have come across so many posts, especially reels, that show people doing absolutely stupid things that make no sense whatsoever. I recently came across a reel of a woman dancing in the middle of the road. And later I heard that she was booked by the police for obstructing traffic, and rightly so! But she’s not the only one. Recently a woman was booked by the police for making dance videos outside a temple. Seriously, dancing outside a temple of all places?

The woman named Aarti Sahu who has over 2.5 million followers on Instagram. She was booked by the Chhatarpur police on Sunday for making dance videos on Bollywood songs outside a temple in Chhatarpur city, Madhya Pradesh. Videos of her dancing outside the temple went viral on social media.

The police took action right after the Bajrang Dal leader, Surendra Shivare filed a complaint against her. In his complaint, he stated that Aarti Sahu made dance videos outside the Janrai Toriya Mandir, a Ram-Sita temple, in an obscene manner to hurt the religious sentiments of Hindus.

Also Read: Indore Woman Dances At Traffic Signal For Instagram Video, Gets Served Legal Notice. All This To Go Viral?

Chhatarpur’s Sub Divisional Officer of Police (SDOP) Shashank Jain who is handling the case said, “Following the complaint lodged by Bajrang Dal leader Surendra Shivhare about the videos, the woman, identified as Aarti Sahu, has been booked under IPC section 298 (deliberate intention of hurting religious feelings of any person).” He further added that legal steps will be taken after the police have examined all the videos and other facts.

As per reports, Aarti Sahu has now released a video statement that said that she has been going to temples since she was a child. She further added that posting dance videos on Instagram were her and her family’s only income. She also apologized and said, “I regret and seek apology from people if my videos hurt their sentiments. It was not my intention.”

Now, I’m not saying that she shouldn’t dance and make earnings out of Instagram. My only question is that is it necessary to dance in front of temples, when you know that you might get into trouble, considering how sensitive our country anyway is? Or on the road like in the other woman’s case? People are watching, liking, and following you because of your talent and not necessarily your location. There are many other places where you can make dance videos. Maybe try finding those and avoid police bookings?

Three Men Belonging To A YouTube Channel Crew Were Arrested For Harassing Women To Get Views.