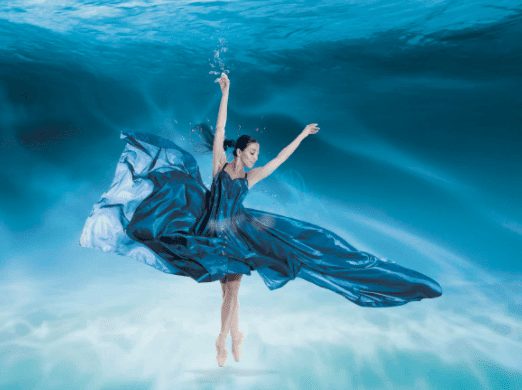 During these pandemic times, we’ve all been starved for entertainment. A lot of people have turned to home workouts and cultivating productive hobbies but keep themselves going. But of course, I am too lazy to do any of that. Instead, I spend all my free time scrolling through Instagram reels. Some of my favourite content to watch are dance videos. Be it people following dance trends or just doing their own thing, there is something so satisfying about dance videos. And if you’re as much a fan of them as I am then you’re going to be completely awestruck by this woman’s underwater dance video. She is funny and graceful all together!

In a video that has gone viral on social media, a Miami-based gymnast named Kristina Makushenko is seen effortlessly performing acrobatic moves and dancing underwater like it’s no big deal. When I first saw this, I was shocked. I have two left feet on the ground. Doing what she does seems next to impossible. Her routine is sort of a tribute to Spongebob and it is just so amusing.

Also Read: Bride And Her Father Ditch The First Dance For A Game Of Catch! Netizens Love The Reason

While sharing the video on her Instagram account, she wrote, ”Sponge Bob & his friends. The author of the underwater video and the only participant is me.”

Kristina Makushenko competed internationally in synchronised swimming with the Russian National team. She won two gold medals at the European Junior Championships in 2011. Reportedly, After that, she retired from competitive artistic swimming. But that didn’t stop Kristina from becoming an online sensation. She posts mind-blowing dance routines underwater to popular songs. Just last year her video in which she does the moonwalk underwater went viral like wildfire. I didn’t even know it was possible to do that.

After watching her Spongebob video, netizens showered Kristina with love and praise. She really has a unique talent and we are just amazed by the way she dances underwater.