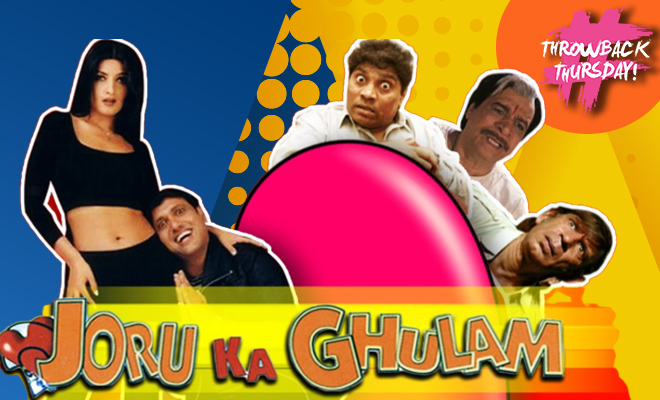 Throwback Thursday: Joru Ka Ghulam Shows Women As Livestock And Liabilities That Need To Be Married Off, At Any Cost. Why?

In India, most women have no choice but to get married at some point unless she is willing to take a stand and forever be considered a disappointment to her family. I am not saying there are no open-minded families who don’t see marriage as an absolute necessary step for a woman, but the number of families that push their daughters into tying the knot far exceeds the daughter-is-not-a-pain in our society.

My grandmother too has been using different tools of emotional blackmail to convince me to get married. I love her and I know she means well but she doesn’t know that what she is doing is nothing but making me jump when I am not ready. But I can say, my family is not all that backward so I am still treated like a queen and given so much love.

I can’t say that for a fictitious Dyaneshwarprasad Pitamber (Kader Khan) in the film Joru Ka Ghulam, which is basically him throwing his four daughters into fire. The biggest problem in his life is that his four daughters, Lakshmi, Saraswati, Parvati, and Durga (Twinkle Khanna) aren’t ready to be married off to the hideous prospective grooms he lines up for them, time and again. The movie opens with Pitamber’s PA calling his daughters “paraaya dhan” and he announces that he is willing to give his four sons-in-law 5 crores each. What a star he is to bribe people into marrying his daughters. Clearly, they are a big bojh on him that he is willing to give them away to any loser and at that cost.

He then has a very shady and greedy set of parents with their son at his place waiting for the girls to be presented to them like items in a buffet. The father of the potential groom says that he married his wife who is deaf and mute for 5 lacs in dahej and so his son will marry any woman if he is getting the promised 5 crores. None of this seems like a red flag to Pitamber and he is willing to give one of his daughters away to them. Thankfully, the sisters prank them and drive them out.

Pitambar is so hurt by the singleness of his daughters, the moment one of his employees mentions that his daughter is getting married, he has a breakdown. It’s like his daughters not willing to do that one thing they are born to do.

Now all of them have reasons to not get married. Lakshmi wants a Joru ka Ghulam, Saraswati is a manhater, Parvati is in one-sided love with an asshole and Durga believes no guy can match her. Also, Durga is the same woman who says things like “main ladki hokar ladko se aagey hu”. What do you mean? Like is it such an unusual thing?

Anyway, Pitamber is expecting Raju Patel (Ali Asgar) from the US to come and marry one of his daughters. But con artists Raja (Govinda) and Kanhaiya (Johnny Lever) fool him and Raja takes on Raju’s identity and goes to his house instead. There he falls in love with Durga’s and her father’s bungalow’s appearance.

Durga goes out clubbing with him and pinches a girl’s butt slyly hoping that she will think it was Raja who did that. But the girl doesn’t react. Then she pulls the strap of another girl’s dress and her male friends start quarrelling with Raja. He excuses himself to go and eat, and watches while the same male friends are harassing Durga. Only when one of them is almost about to abduct her is when he decides to leave his food and give them a fight.

After the fight, he goes on to victim-blame-and-shame her and scolds her for misusing the freedom her father has given her. Why? Just because she was dancing in a short black dress, it suddenly became her fault that those men wanted to assault her. If someone told this to me, I would have asked him shove his opinion up his arse. Of course, after thanking him for saving me. But Durga has a change of heart and clothes as she dons the personality of a sanskaar-rakhshak. Dressed in a saree, she gives a long speech on how she had nobody to teach her how to be a lady and how she is so embarrassed for having crossed her boundaries. Wow.

But now if Raja wants the promised 5 crore, Pitamber’s condition is that all four daughters must marry at the same time. How do they get the others married? In Raja’s words, they go on to find “baaki samaan ke liye coolie” because you know women are just luggage waiting to be carried.

So Durga and Raja carry on Pitamber’s dream forward by throwing the other sisters into the arms of shitty men. Durga must really love her sisters.

So they go to fix Parvati with her crush, who basically treats her like a beggar. He is in love with a bar dancer but when he finds her flirting with other men, he realises that Parvati was better. He says sorry to her and she immediately forgives the fuckboi. A good sister would have asked Parvati to ask the guy to fuck off because he doesn’t deserve her. But we have Durga setting them up for marriage.

Then they set up Kanhaiya with one sister and the OG Raju Patel with another because kaam khatam karna hai. When they are finally getting married, Raja decides to come clean and when he does, a surprise is waiting for him. Pitamber reveals that he knew from the start that Raja is an imposter. So basically he was so desperate that he was willing to give his daughter away to a con artist. He could have been a human trafficker or a murderer. Daughters are not bojh and we wish people knew better.