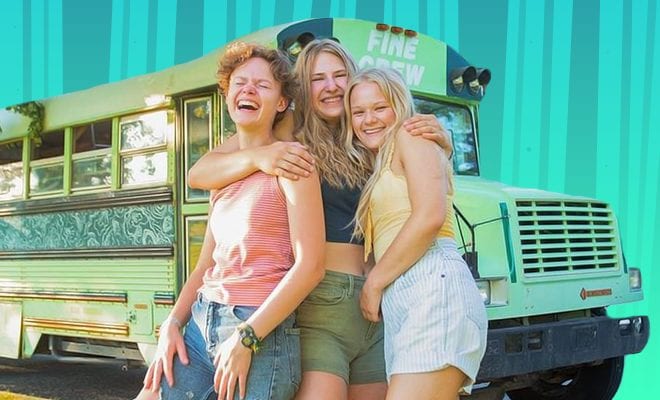 Here is an interesting question. What would you do if you found out that your boyfriend was cheating on you? Would you give him another chance, exact revenge or simply walk away? Of course, one option is healthier than the others but I’ll let you figure that out for yourself. The bottom line is that being cheated on is one of the worst feelings in the world. Apart from the crippling sadness and the white-hot rage, you also feel this sense of shame and guilt for not recognizing the red flags sooner. But as they say, sometimes things have to fall apart for better things to take their place. And that’s what we are going to focus on today by talking about three women who found out they were dating the same man. They all broke up with him and went on a road trip together. Girl friendships are always more precious than any relationship!

Bekah King, Abi Roberts and Morgan Tabor were shocked to find out that their boyfriend was cheating on them with numerous women. They got together and decided to break up with him and go on a road trip together. It all started when Morgon grew suspicious after finding another woman’s social media page on her boyfriend’s account. She reached out to the woman and they continued digging until they found someone else that he was cheating on them with. It was a nasty situation.

Morgon, who lives in Boise, Idaho, told the media, “I have no words to describe the feeling I got seeing the photo of him with another girl. I thought I was going to marry this guy. We had talked about houses and what our marriage would be like. My world came crumbling down. I had to mourn the loss of this future we were building up together. It was soul-crushing.”

3 women go on a road trip after dumping the same guy https://t.co/aXGSPq4nYO

Also Read: This Girl Got The Best Revenge On A Cheating Boyfriend, This Tattoo Artist Explains. It’s Evil But Genius

She got in touch with all the women her boyfriend was cheating on her with and they all got on a FaceTime call to vent. Coincidentally, while they were on the call, the man showed up at Morgon’s house with flowers to surprise her. She took the flowers, put them on the floor and told him that she had made some new friends recently. As soon as she turned her phone to show him the two women that he was also dating, his face turned white. Abi Roberts said that his expression was priceless.

The man obviously tried to defend himself by giving inane explanations. He said that he wasn’t exclusive with any of the women. The three women weren’t buying any more of his nonsense and they dumped him immediately. However, they continued to comb through his social media accounts and to their horror they found that he was also dating six more women at the same time. Basically, this man was dating nine women at once.

For Morgon, Abi and Bekah though this heartbreak proved to be a boon in disguise. They found each other and decided to buy a bus and explore the country. Road trip for the win! Earlier this year, they found an old bus that once belonged to a fire crew. They saved money to buy and renovate the bus. The girls named the bus the BAM bus and hit the road.

Abi said, “If I had a word to describe this whole experience, it would be surreal. From the moment we pulled out of the driveway in Boise, we have met so many incredible people at campgrounds, on hikes, through Instagram. We learned so much from so many inspiring people and the amazing nature we have been able to spend time in. It’s absolutely surreal. This guy doesn’t deserve any credit, but thank you for bringing us together, honestly.”
This would make for an amazing movie plot!

Unique Ways Women Found Out About Their Cheating Partners. We Are Human Lie-Detectors!