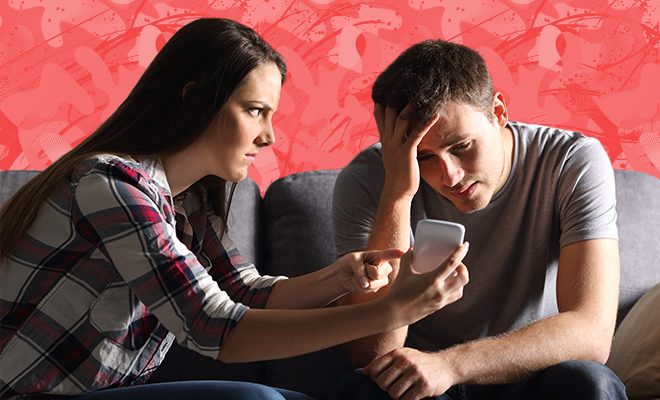 Unique Ways Women Found Out About Their Cheating Partners. We Are Human Lie-Detectors!

There are several people out there that have been cheating in perfectly healthy relationships, just because they love the thrill of novelty. My jaw dropped when a friend recently told me how a guy he knows meets women on matrimonial apps, and has one night stands with them. Apart from the fact that he is fooling these women into believing he is seriously into them, he is also lying to them about being single. This guy is married and is on a matrimonial app and talks about it with people without any shame.

At the same time, I have been talking to a friend of mine who met a guy she clicked with and then he started with how scared he is of commitment. I am sorry, did he mistake Shaadi.com for Tinder? But still, he insisted she meets him when he comes down to her city this month. I mean, is he one of those guys looking for a quickie? For all we know he has a girlfriend/wife in the country he resides. My friend doesn’t want to wait to find out.

There’s so much dishonesty and cheating around us, and we start being vary after having a tryst or near-encounter with something like this. However, I always say, many of us women are intuitive and observant enough to know when we are being lied to. Sooner or later, we tend to find out – we see the slight changes in behaviour. Yes, sometimes we are just overthinking it but damn, sometimes we are so right!

Here are some unique ways women found out their husbands/boyfriends were cheating.

Imagine waking up in the morning to find out your husband just got blessed with a baby from another woman who also happens to be his wife. A woman, Ami Addison, from Pennsylvania recently shared a video revealing the painful way she found out about her now ex-husband’s double life. She said she was reading the local newspaper and back then they would publish details of new parents to congratulate them as well as make a public announcement about the baby’s arrival. And there it was – her dumb husband’s deets.

Shocked, she went to the hospital and found out that this was actually his second child with the other wife. In fact, with Addison, he had three children as well. So one day, she waited for him to leave for work and left with her children. She is currently married to a guy who used to be his friend.

From a live picture

Serrina Kerrigan, a social media influencer, found out her boyfriend was cheating on her after he sent her picture of his bed. The reason he sent her a picture of the bed was that he wanted to tell her he was missing her there. However, the guy forgot that he had the live pictures mode on. It enables a user to long press on an image to see what was happening in a 1.5 second window before it was clicked. When Kerrigan did that, she could see a girl hop out of bed. Uh-oh such a rookie mistake! Sharing the video, Kerrigan wrote, “When the guy you’re dating says he misses you, but then you click the live photo. Looks like you have some company.” And that’s how you catch a cheating boyfriend!

His fitness band gave it away

Nadia Essex from UK, a relationship expert found out her live-in boyfriend was cheating on her in a rather unique turn of events. He had come home late the previous night and was fast asleep. She decided to make him a hearty breakfast to energise him. Turns out, he had used all his energy somewhere else the previous night. “I got a notification on my FitBit … the FitBit that we had synched together … that between 2 o’clock and 3 o’clock in the morning, yesterday morning, he had burned over 500 calories.” While a lot of people pointed out, he could have been dancing in a night club but she revealed that wasn’t the reason. But seriously, 500 calories in sex? That is some workout!

It was in the reflection

Sydney Kinsch, found out her boyfriend was cheating on her when he sent her a selfie on Snapchat and forgot that glass surfaces reflect images. Too bad, he should have paid more attention in science class. So here goes. In the reflection, you can see a woman’s legs going out of the car window. He tried to say they were just friends but a week later she found out he was seeing five other women! She shared a video with the big reveal and wrote, “Check the reflection in your boyfriend’s sunnies ladies.” “Guys always thinking they can pull a fast one on us,” a user wrote. “Don’t know why he’s got the sunnies on, he’s not that bright,” another user wrote wittingly.

ALSO READ: Woman Finds Out Boyfriend Is Cheating On Her, Takes The Most Savage Revenge

Hair in a bag

A TikTok user @justkatie87 had shared on her feed, “My husband has been running straight after work lately. He takes a gym bag to work,” she explained. “I haven’t been noticing any physical improvements, but I did notice this while emptying his gym bag.” She picked out strands of brown hair from his pants. She is blonde. Soon after, he changed his phone’s passcode. She revealed, they had the same passcode and now he is suddenly being very sneaky about his. Other users encouraged her to follow her intuition about her husband cheating on her.

ALSO READ: Woman Finds Out Her Boyfriend Is Cheating On Her Because Of Her Observational Skills