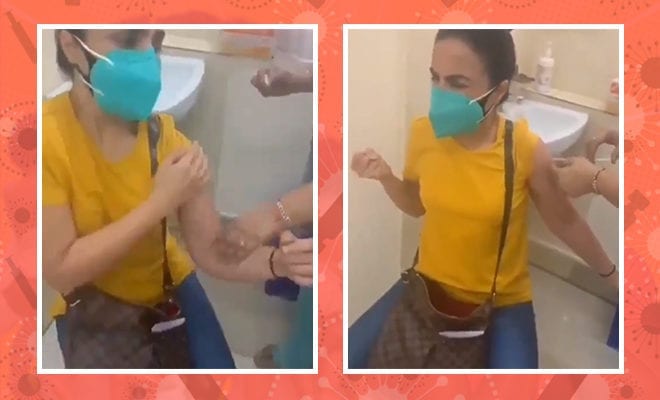 This Woman’s Hysterical Reaction Before Getting Vaccinated Leaves Netizens In Splits. She Is So Relatable!

When I was 6 years old, I contracted typhoid fever. Unfortunately, my family doctor at the time was a bit of a quack. I was misdiagnosed and treated for Malaria instead. And because of his gigantic error, I had to spend a month in the hospital. And thus started my lifelong phobia of injections. Okay, I am exaggerating. It’s not a phobia but I am terrified. The last time I had to get a simple blood test, I got yelled at by the nurse for squealing and moving too much. So when I saw this video of this woman panicking while getting vaccinated, I could completely, one hundred per cent, relate to her. This is the most hilarious video you will watch all day!

The 45-second video that has gone viral features a woman moments before she is getting her vaccine. She is hysterical and petrified of the jab. That much can be seen very clearly when she jumps up from her seat and asks the nurses to give her a moment. In the video, someone can be seen trying to calm her down while the nurses sternly ask her to cooperate but that only freaks her out more. The most hilarious part of the video is when she asks the nurse if she can say “Mummy” while getting vaccinated and then screams while getting injected. At the end though, someone says “ab dafa ho jao” (now get lost) which left me in splits.

Also Read: Akansha Ranjan Shares Why She Isn’t Worried About What’s In The Covid-19 Vaccine And It’s Hilarious

Since this video of shared on social media, it has garnered hilarious reactions from netizens. I am sure most people, myself included, can relate to this woman on a whole different level. I know for a fact that when my turn comes to get vaccinated (if I ever get a slot!) my reactions are going to be not unlike hers. Maybe I’ll tone down the screaming and I would definitely not ask the nurse if I can say “Mummy” but the sentiments will be the same.

This is one of the most hilarious videos floating around on social media right now. I am really enjoying how it’s given a rather humourous and relatable perspective to the otherwise abysmal vaccination drive.