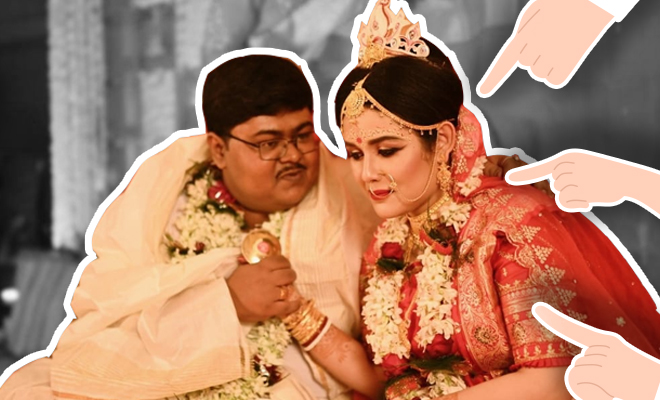 This Woman Became Meme Fodder For Marrying An Overweight Man. This Is Not Okay

The double standards of us humans often perplex me. We talk about racism, discrimination, mental health and yet we show a complete lack of empathy when it comes to pulling others down. We hate being subjected to beauty stereotypes – fair skin, an hourglass figure, no scars, no body hair, etc. Yet, we fail to realise we become part of the same culture we despise. When your friend sends you a picture of the guy she’d been flirting with, you rate him on his looks. You’ll tell her he is not that great. When a friend marries a guy who doesn’t fit the description of a tall, dark, handsome prince charming, you tell her she’s “settling” for him. People even go and claim that she probably married him for money. And after all of this, we talk about mental health.

Recently, a newly-wed couple from Kolkata had become the target of online trolls, who thought it was hilarious to share their wedding pics on social media. They were being used as meme fodder because Ekta Bhattacharjee, the woman in the pic married an “overweight” man.

Aren't they so cute? Their love story of 11 years is going viral on social media. I found them soooooo cute and the…

She decided to address the issue once and for all. “I have been facing this since the very first day of my relationship. It’s been 11 years and I find these more than amusing. My choice of dating an overweight man was questioned and mocked innumerable times. I kept on ignoring,” she wrote on Facebook. Like it’s her choice; why are these trolls so concerned? It’s not like her choice of partner affects the quality of their life.

This is someone’s personal life and it’s a shame that people don’t respect their privacy. They are humans, with feelings that can be hurt. And people who do this trolling business are potential sociopaths with a lack of empathy. Attaching a person’s worth on their appearance is shallow and detrimental to the mental wellbeing of people.

Whether a person is fat, thin, short, tall – it’s nobody’s business. And we shouldn’t make anyone feel not good enough if they don’t adhere to the shallow beauty standards set by the world. We should be shattering those instead.

When Ekta’s friend shared a link to a post making fun of the couple, she decided to report that page but her husband asked her to let it go. “A few minutes back my crazy man told me NOT to report this page. He said ‘It ain’t a big deal for me. There are so many people who love me. That’s more important than anything else. And these people are just jealous because I got a beautiful wife, baad de (leave it)’,” Ekta revealed.

The couple has been childhood friends and several of their friends have been praising them for the bond and connection they share. A lot of love and support came their way, and that restored my faith in humanity. For every asshole, there are also so many people who love you and stand for what’s right. Meanwhile, if someone extremely concerned about her marrying an overweight man, they can stick that question where it belongs.

ALSO READ: Journalist Accused Dulquer Salmaan Of Body Shaming And Using Her Pictures In A Movie Without Her Consent. We Can All Learn To Be More Careful From This