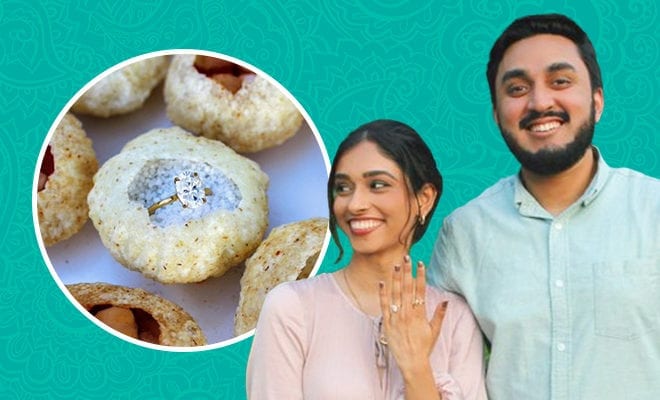 This Man Proposed To His Girlfriend By Hiding The Ring Inside A Pani Puri. Twitter Was Both Appreciative And Concerned

Whenever I think of how I want someone to ask me to marry them, I always imagine it would be on a private yacht with candles, flowers and good music. And of course, a beautiful diamond ring. A simple proposal. Nothing too extravagant. I’ve heard of all the wacky ways in which men propose. And while they are all perfectly adorable, they are also very, very extra. Hot air balloons? No thanks. Although, there is one cliche way of proposing that I have always found extremely charming. Putting a ring in a girl’s favourite food as a surprise. We’ve all seen it happen in various movies and TV shows but this is the first time I’ve seen it happen in real life, using pani puri no less. Such a perfect proposal story!

This man used his girlfriend’s favourite food, pani puri or well, gol gappas, to propose to her. This proposal went viral after the bride-to-be posted photographs of the proposal on Twitter. One of the photos shows a ring peeking out of a plate of paani puris. It’s melting hearts on social media.

i mean,, can’t say no to pani puri
Gol gappay or pani puri are enjoyed by everyone and they are a real treat. But none of us would have imagined getting proposed through gol gappay. This man is doing things differently and after bizarre food proposals, pic.twitter.com/OwvGFc1Jd4

Also Read: Man Gets Angry At Woman Who Photobombed His Proposal Video. Netizens Stand Divided On The Matter!

Taking to Twitter, the girl wrote, “I mean, can’t say no to pani puri”. She also posted photographs of the happy couple and of the ring. It’s so romantic. A while after these photographs were posted, they went viral on social media. After all, who doesn’t love a good plate of pani puri? It should be called the national food of India considering how loved it is. Anyway, while most netizens are fangirling over this proposal, a lot of them are worried about what might have happened if the girl accidentally swallowed the ring. Let’s be honest here, it’s a huge and very risky possibility.  But hey, there is no room for cynicism amid all this romance.

Take a look at some of the reactions netizens had:

Congratulations ♥️it's amazing u saw the ring ,some of us would have just gulped and not seen it & spoild the moment 😭

My fat ass would have swallowed the entire thing, ring and all

I don't know you, but hi , Congratulations!! To the dude, you took a huge risk brother!! Most girls, including my better half , would have swallowed the Pani Puri with glee 😁😁God bless you both

#Relationships: A Starry Proposal Under Once-In-6800 Years Comet Neowise. This Is Awedorable