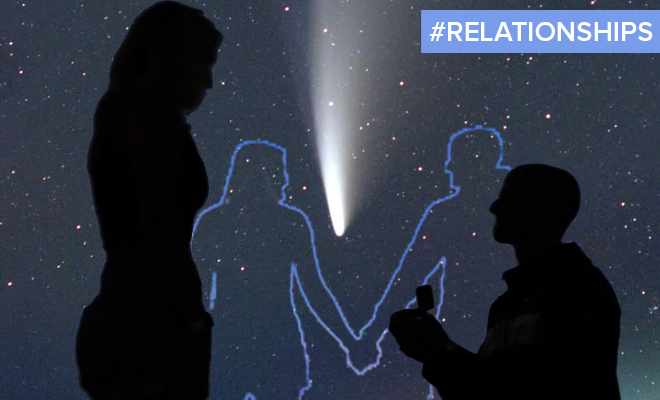 #Relationships: A Starry Proposal Under Once-In-6800 Years Comet Neowise. This Is Awedorable

I am a hopeless romantic and for me, the proposal really counts – like deep down, I want it to be grand. And no, I don’t mean a five-star dinner but I definitely want to be proposed when we are in the middle of something really cool. A candle-lit, dinner date at home with fairy lights all around, on a romantic holiday or when we are at the balcony watching the sunset, enjoying a glass of my favourite red wine. If I had to propose to  my guy, I would definitely do it this way.

But there are some guys who go the extra mile to make the moment even better than a romantic movie. And this time, a guy has surpassed all such proposals to create one that’s like beyond anything I’ve ever known. If I got a proposal like that, I would say yes even if I hadn’t thought of marriage. But with someone so romantic, why wouldn’t I?

John Nicotera from Utica proposed to girlfriend-turned-fiancée Erica Pendrak under Comet Neowise, a phenomenon which btw won’t occur again in the next 6800 years. And the best part, they even had the special moment captured!

John and Erica are both teachers living in Central NY area and had met each other on Instagram (meanwhile, I only have shady men sliding in my DMs). “We knew of each other. We both coach in the area and have some mutual friends. She posted something one day about basketball and I made a comment underneath it and the conversation kept going from there,” John told Syracuse.com.

Back in December 2019, when we had no clue what 2020 had in store for us, John had planned a trip to Oregon scheduled for July this year. It was at Crater Lake National Park where he was planning to pop the question. So when the trip got cancelled, they were quite bummed but John being a “space junkie” as he likes to call himself, made another plan and it turned out to be even better. When he heard that Comet Neowise was going to arrive and be visible from Upstate NY, he asked her to come see it with him and she said yes.

But it wouldn’t be so easy and the timing had to be perfect. “We had other things going on during the week and that was really the only night that worked for us. At that point I knew I needed the clouds to be away, the skies to be clear, and mother nature to be friendly to me,” John said.

He had also asked a photographer friend Tim Leach of Old Forge, NY to help him zero in on the perfect spot to see the comet. When he forgot to bring his binoculars, he asked Leach if he had a pair and that’s when he suggested he could take photos and he could see it through the cam. “I spilled the beans to him and I told him about the idea to get a photo of the proposal with the comet,” John revealed. To this Erica added, “We had just wanted to get away for the day and enjoy the boat and see the comet at night. His friend Tim offered to take couples pictures so I was excited about that and said yeah let’s definitely get some pictures.”

Leach and his girlfriend joined the couple and prepped to see the comet. However, to capture the moment properly, John and Erica had to be still for seven seconds so he can take the shot. “I just found the best middle ground in the time I had to shoot the photo. John and Erica had to be still for about seven seconds. You will notice that the photo is slightly out of focus, mostly due to the fact that it is nearly impossible for a person to be perfectly still for seven seconds. But, it is the moment that counts,” said Leach.

It’s really heart-warming and beautiful that John planned for this to happen. His timing was perfect and now the couple have the most amazing proposal story to tell their grandkids. I am going to make a list of these astronomical events and hand over a copy to my bestie so she can help my guy do this. In fact, if he isn’t going to, then I will because this is mind-blowing. But first, I must find a boyfriend and then get past “I am not ready” phase, if I can, at all. Never mind.

ALSO READ: This Guy Staged An Elaborate ‘Princess And The Frog’ Proposal For His Girlfriend. We Can’t Stop Going Awww

“It’s crazy. It was a shock when we woke up the next morning and we saw how many likes and retweets this got. It’s awesome that we have that moment that we can keep and cherish and have, but that it’s being shared is awesome,” John expressed. The couple hasn’t finalised a date yet but seems like they are already enjoying the courtship period.

ALSO READ: This Guy Hired An Entire Theatre, Animated His Girlfriend Into The Movie And Proposed. It’s So Cute We Are Going Aww