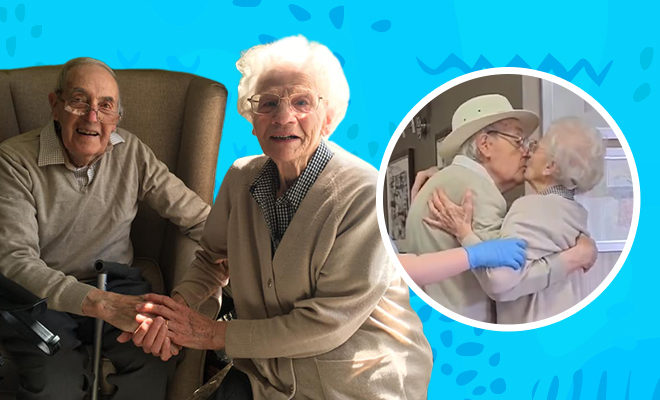 One of the biggest setbacks of the coronavirus, apart from the failing economies, global lay-offs, shortage of food and shelter and rising number of deaths was the mental stress and trauma that people developed because of the isolation. Not being able to meet friends and family left everyone feeling lonely and desolate. Perhaps that is why, as and when the lockdown started to lift and people were able to meet their loved ones with precautions, it marked a few beautiful stories about reunion. And one such story was that of this elderly couple from Nottinghamshire.

Mary Davis, 89, had last seen her husband Gordon, months ago when he had moved into a care facility the previous year. However, as the coronavirus spread across the world like wildfire catching people off-guard, the sudden restrictions on meeting and interacting kept the two apart.

Meanwhile in February, Mary was moved to a different care home than Gordon’s, known as Baily House Care Home in Mansfield, Nottinghamshire. The two who had spent almost 8 months apart at this time, were finally reunited after Gordon was transferred to the same care home, and a room was made available for the two there.

Also Read : Old Couple Visiting Their Newborn Grandchild, With Their Dog, Through A Glass Door Is So Wholesome

After not seeing his wife Mary for several months due to the pandemic — Gordon decided to surprise her by moving into the assisted living home so they could be together.

The staff at the care home, recorded the moment where the two finally got to see and hold each other. The moment, that was so precious, as the two embraced each other, filled the hearts of the netizens with love and hope, as it went viral with a short period of span itself.

The two could be seen hugging each other and saying “I love you” to each other. Leaving their walking sticks be, the two then held on to each other and exchanged a heartfelt kiss. As Mary cried in the moment, overwhelmed with emotions, so did we watching the old couple reunite.

That is so beautiful. I wish I could have had my mom for 80 years.

Can we please fix our elder care system?? Couples should be moved in together, even if one is capable. We will all be old eventually, what do you want your elder care life to be? Let's all think on that.

The Baily House Health Home has this picture of them on their FB page, if you want to cry a little more.https://t.co/mEK3qruxDV pic.twitter.com/xfQaLA1lJK

Posted by a user named Rex Chapman on Twitter, the video was put up with a caption that read, “Manchester, England. After not seeing his wife Mary for several months due to the pandemic — Gordon decided to surprise her by moving into the assisted living home so they could be together. Here’s the reunion.” And here come the waterworks!

Also Read : This Is An Unusual Story About An Old Couple’s Love And Separation And Now Marriage. We’re Going Aww