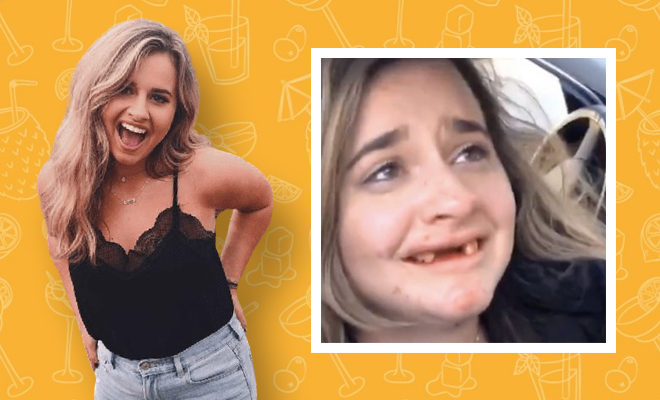 This Girl Got Drunk And Did Something Stupid. She Lost Her Front Teeth!

Do you know what is the one thing I miss the most amid this godforsaken pandemic? Wild drunken nights. And well, days. There is something very special about drowning your worries and problems in alcohol and dancing on tabletops all night long. Here’s the thing though, with alcohol, things can go south very fast. Like it did for this girl who broke her front teeth while being slobbering drunk on mimosas. This incident reminded me of the Hangover movies. It’s tragic but absolutely hilarious!

At a party with her friends, this girl was enjoying mimosas. However, she had one too many and that’s when tragedy struck. She, somehow, broke multiple of her front teeth. I feel terrible about laughing at the video but it’s just so funny. We all face consequences after a drunken night, but this was a steep price to pay for a few mimosas. A video of her drinking has been floating around social media and it’s pure gold.

The video that is going viral was posted on social media by user @fernvndooo. It starts with the girl saying she is down 4 mimosas followed by her friends revealing their own count. It was pretty evident that they were all for a lack of a better word, sloshed. But who can blame them? Mimosas are as delicious as they are potent.

It was all fun and games for this girl until, for some reason, she decided to climb onto the back of one of her friends. We don’t know why she did that or whether she fell or hit her head somewhere but the end result was pretty horrific. The video suddenly cuts to her face with a bleeding mouth and missing front teeth. As I said, tragic but hilarious. Well, until it happens to you that is.

The video is going viral like wildfire. It has been viewed M times, retweeted almost 40k times and received around 21k comments so far. I guess a lot of people relate to drunken mishaps. I know I do.

This video is guaranteed to give you a good laugh. But at the risk of sounding like a Debbie Downer, we must be careful and drink responsibly. What happened with this girl was terrible but it could have easily been much, much worse. Better safe than sorry, right?

#Trending: This Little Boy Video Bombed A Weather Report With His Hilarious Dance Moves. This Is The Best Thing You Will See All Day