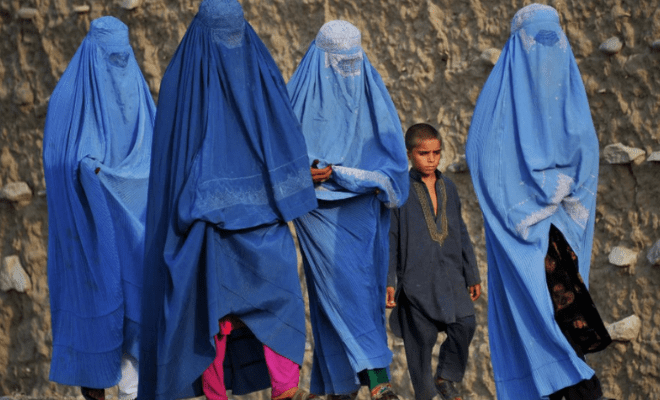 I’m sure that by now even those who are living under a rock would know the condition of Afghan people in Afghanistan – especially the women. Ever since the Taliban rose to power in the country in August, they have imposed harsh and inhumane restrictions on women that violate their human rights and their basic freedoms. In fact, after the UN gave them warnings, they still haven’t taken any steps to improve the conditions of women. Rather things have gotten worse for women out there who are forced to cover up their entire bodies.

On Thursday, an official confirmed that the religious police of the Taliban have put up posters in the southern Afghan city of Kandahar that reads that all Muslim women who do not wear an Islamic hijab that completely covers their bodies are trying to like animals. Kandahar is the de facto power centre of the group.

This week, the Ministry for Promotion of Virtue and Prevention of Vice, which enforces a strict interpretation of Islam, showed images of burqas that completely cover a woman’s body from head to toe on their posters. And the posters put up by the Taliban read, “Muslim women who do not wear the hijab are trying to look like animals.” They plastered these posters on cafes, shops, and even on advertising hoarding across Kandahar.

Also Read: India Along With The UNSC Calls For A Reversal Of Taliban’s Face-Cover Order For All Afghan Women

The Taliban posters also said that wearing short, tight, as well as transparent outfits was against the Akhundzada’s decree. Speaking about this move, the head of the ministry, Abdul Rahman Tayebi said to a portal, “We have put up these posters and those women whose faces are not covered (in public) we will inform their families and take steps according to the decree.” The decree warms and even allows the authorities to suspend government jobs of male relatives of those women who do not follow the order.

These posters came up right after the Taliban passed a decree that all Afghan women should cover themselves completely – including their faces – before they step out in public. They even had ordered TV presenters and women on-screen to cover themselves.

Gold Medalist Boxer Nikhat Zareen Says Wearing A Hijab Is A Personal Choice. She Said It!