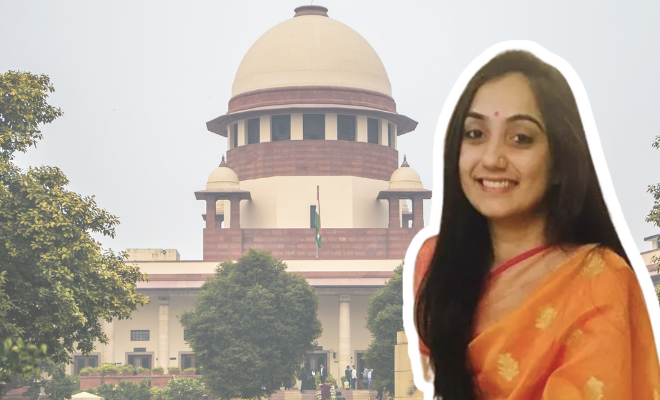 Our country is in a state of chaos with the recent Udaipur killing following suspended BJP leader Nupur Sharma’s comments on Prophet Muhammad which ignited tension in the country. As things unfold and the tension continues, the Supreme Court has slammed the BJP leader for her remarks. The Apex Court came down heavily on Nupur Sharma and said that she is “single-handedly” responsible for what is happening in the country.

On Friday, a vacation bench of the Supreme Court comprising Justices Surya Kant and JB Pardiwala was hearing suspended BJP leader Nupur Sharma’a petition to club the FIRs filed against her across the country for her remarks on Prophet Mohammed. The Apex Court slammed the BJP leader for her “disturbing” statement made on the National television against Prophet Mohammed. Blaming Nupur Sharma for igniting tension in the country, the court stated that she should “apologise to the whole country”. “The way she has ignited emotions across the country. This lady is single-handedly responsible for what is happening in the country,” said the Apex Court as quoted by LiveLaw.

When her counsel spoke about the written apology issued by her, the Supreme Court said that she should have apologised on national while adding that she was “too late to withdraw”. The court also noted that the suspended BJP leader did not issue an unconditional apology but a conditional one despite her offensive comments which led to massive protests across the country and also affect India’s relationship with Gulf countries which summoned Indian diplomats to issue severe reprimands.

Also Read: Who Is Nupur Sharma, The BJP Leader Whose Controversial Remarks On Prophet Muhammad Had Her Suspended?

The Top Court further blasted the suspended BJP leader and said that her “loose tongue has set the entire country on fire”. The Apex Court also expressed its reservations about Nupur Sharma directly approaching the top court and bypassing the lower courts. The court said that her petition “smacks of her arrogance, that the Magistrates of the country are too small for her”. The court further added that when an FIR is registered and one is not arrested, it means that their power and influence is pretty evident. It added that the suspended BJP leader thinks she has backup power and goes on to make “irresponsible statements”. When her counsel suggested that there was provocation from the debater and alleged misuse of the debate, the court said that if that is the case then the first thing Nupur Sharma should’ve done was to file an FIR against the anchor. The court also noted that the BJP leader the channel has no business discussing a matter that is sub-judice.

Blaming Nupur Sharma for the Udaipur incident, the Supreme Court rejected her plea and forced her counsel to withdraw the petition and asked her counsel to approach the High Court. For the unversed, during a channel debate on the Gyanvapi Masjid issue on Times Now on May 27, Nupur Sharma made alleged derogatory remarks against Prophet Muhammad which led to several FIRs being registered against her in Mumbai, Hyderabad and Srinagar, of which at least 3 have been registered in Mumbai.