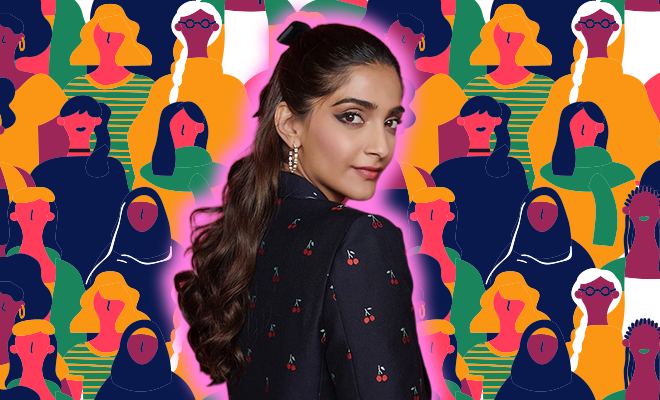 Sonam Kapoor Dropped Major Truth Bombs About Indian Society And Its Misogyny. She Spoke Our Mind!

Look, it’s a rule. If you ever hang out in a group where there are men and women, there’s always one misogynistic asshole. This person pretends he actually cares about women’s causes but then wants to bring “logic” to the conversation. So when you talk about the inequality we women have to endure, he thoughtfully brings up reservation. When we talk about rape, he talks about how the laws are skewed in favour of women. Some of these men might be dead now. I am not going to confirm or deny anything, but I *may* have clubbed them over the head with a bat. Point being, while you don’t have to be an outright chauvinist, you can still work against women by encouraging things in a system that work against them. And Sonam Kapoor talked about exactly these things in a a recent interview while on the promotional tour of The Zoya Factor.

While speaking to Zoom, Sonam said, “I think it is really important to do that because our society and India, in general, is very patriarchal, there is a lot of inequality, whether it’s the way women are treated, whether it is the pay gap and the expectations that are there are from women.”

It’s true though. For women, the expectations, especially in the industry, is that they turn up and do their work in their role. The male stars are often touted as the money-spinners. Recently, Mission Mangal which essentially celebrated women scientists had Akshay Kumar’s face splayed all over the poster. Even when the movie rocked the box office, it was called Akshay Kumar’s success. And that’s the thing about hiring women, you have to play to their strengths. And thing often ignored by Bollywood and various other industries.

ALSO READ: Sonam Kapoor Creates Awareness On Human Trafficking In The Country And It Couldn’t Have Come At A Better Time

Sonam said, “I know that there are so many companies, who would not want to hire women or put them in a higher position as they feel that ek din toh shaadi ho jayegi, phir pregnant ho jayegi, phir kaam band ho jayega. So, there are a lot of these kinds of stigmas attached to hiring a woman. Even in media or film industry or the corporate industry, all industries have this. I feel it is important to showcase women in a different light.”

And while one Sonam saying it won’t change a thing, at least it’s a start. We just need more women with strong voices to pitch in.

ALSO READ: Every Headline About Mission Mangal Crossing 200 Crores Calls It Akshay Kumar’s Film. So No One Is Going To Credit The Women?