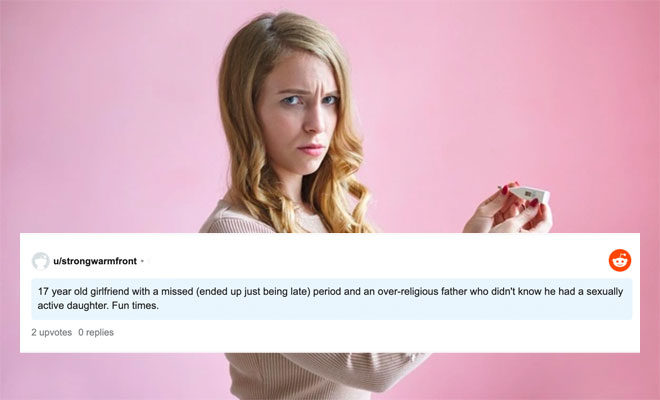 Redditors Talks About All The Times They Had A Pregnancy Scare And The Responses Are Astonishing!

With sex-positivity in the air, awareness about safe sex is more prevalent than ever. And as someone who advocates for both: sex positivity and safe sex, I stan this progressive attitude. However, this might be kinda nerve-wracking for those with uteruses that have to worry about pregnancies. I have been a witness to the multiple times, many of my sexually active friends have taken pregnancy tests, waiting outside the washroom for them to tell me what the results are. Thankfully they were all empty pregnancy scares but very worrying, nonetheless. However, looking back at them, I find them amusing. All the google searches done in a panicky frenzy and all the quora forums added to the paranoia caused just due to the periods being a few days late.

Apparently, my friends and I weren’t alone drowning in our ignorance (and all the stress that WebMD gave us). I know this as I found a Reddit thread on one of my daily Reddit deep dives. User u/hdbaker009 asked on r/AskWomen the question, “What was the worst pregnancy scare you had that turned out to be a negative? (for those who did not want to be pregnant)” And the answers were amusing but concerning.

Comforting to know that my friends and I aren’t the only ones whose first reaction is to break into a chaotic panic:

Why are men like this? Where does this audacity come from?

These answers were surprising, to say the least. Pregnancy scares can be traumatising. Especially if you come from a background where being pregnant is not feasible for you. All the anxiety and stress attached to those few drops of pee on the stick is not worth it. I feel that this can be avoided if proper sex ed is given from the grassroots level aka schools and families too. “The talk” shouldn’t be this big taboo that no one wants to bring up. Being all hush-hush about this is just causing more harm as it causes more intrigue about sex amongst hormonal teens who have no idea how to manage a situation like this.

What Women Really Want: Is To Not Be Judged And Shamed Anymore For These Things