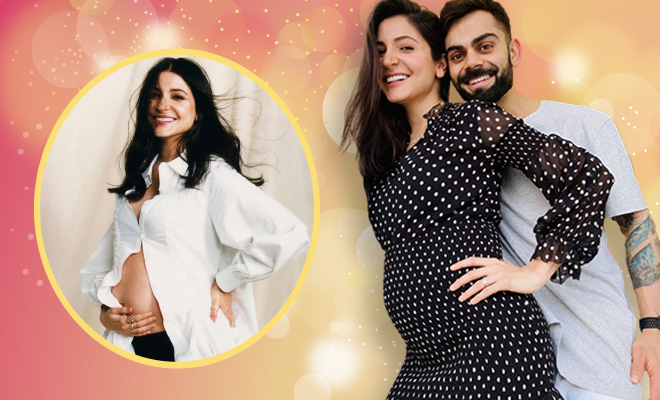 Pregnancy is such an important time in a woman’s life. While she is at her most vulnerable she also displays immense strength. The duality of it is beautiful. Moreover, literally being able to create life is a power within itself, in my opinion. No wonder women are compared to goddesses. However, at a tumultuous time like this, a woman deserves a strong support system from her partner. Luckily, Anushka Sharma had that support in her husband, Virat Kohli when she was pregnant with their daughter Vamika.

Anushka Sharma was pregnant with Vamika during the Covid-19 pandemic. Recently, in an interview, Anushka opened up about how ‘awful’ the initial months of her pregnancy were and having Virat there with her was amazing because he was not playing any matches at the time. How sweet! She said, “One of the things this experience has taught me is to always look at the positives. It allowed Virat and I to spend a lot of time together because he wasn’t playing any matches at the time. Had he been travelling, I wouldn’t have been able to accompany him in my condition. My first trimester was awful, so it was nice to have him by my side, to handhold and be my cheerleader.”

Anushka Sharma expressed her want for a baby shower and also joked about throwing one for herself. She finally ended up having a small one with just close family to maintain the  Covid restrictions. Vamika was born in January 2021 and both Anushka Sharma and Virat Kohli have requested privacy and asked the paparazzi to not take unauthorised photos of their baby.

Firstly, big yes to parents protecting their children and their privacy. I am glad more and more celebrity parents are opting for this. Secondly, it is really great to see that Anushka Sharma was able to seek comfort in her husband during her pregnancy. While the regressive ideal of men not involving themselves with the household and children still exists, many are moving on from such ideals and trying to be better partners and support systems for their spouses; a much welcome change.

Hautetalk: Rhea Kapoor Was Called “Silly” For Not Believing In Karva Chauth. Why Are We Still So Regressive?