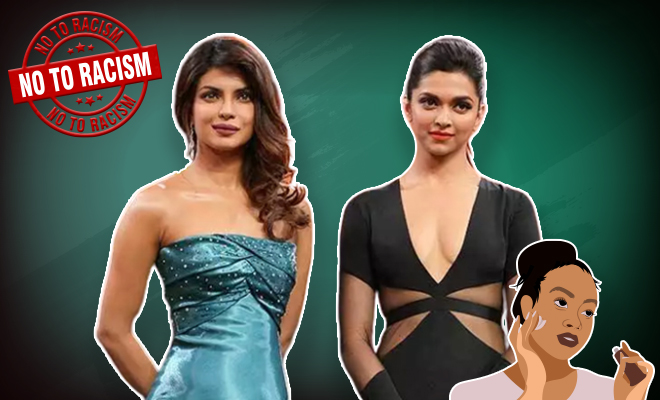 Priyanka Chopra, Deepika Padukone Talking About Racism Is Not Irrelevant Because They Did Fairness Ads. It’s Called Growth

A cyclone is potentially forming the Arabian Sea as I write this. In Brazil, their President (who isn’t the sharpest tool in the shed anyway) appeared in public without a mask and then trotted away on a horse. I don’t know the answer to your why’s, I am just as confused as you are about the need to do this. And we all know the name George Floyd. It haunts us because we can see the injustice, the video of him saying the words ‘I can’t breathe’ will ring in our ears for a long time to come. That’s the thing about the internet, about social media – you can be witness to things happening around the world – and if that pulls at your heart strings, enrages you. And unfortunately, now the raging debate is whether we should be allowed to feel bad for things that are not in our country.

For starters, you don’t get to decide who is allowed to speak up for what cause. You don’t get to decide if they are ‘woke’ enough or not because they are talking about racism and didn’t speak about migrant workers. That’s not how it works. And this is what regular joes like us are going through. Celebrities have it way worse.

A huge debate has been sparked because Priyanka Chopra and Deepika Padukone have put up posts condemning the racism and now they are being called hypocrites because didn’t these women do fairness ads?

I get where the rage is coming from. It’s supposed to expose the double standards. The fact that they are talking about a certain colour being accepted and not be singled out, and then their history exposes a bunch of bullshit about being fair is being prettier or more successful, reeks of hypocrisy.

But we also know this. For a lot of women, getting into Bollywood is a dream and the first step is often a crown at a pageant or a commercial. Arguably, Priyanka and Deepika did these ads after they were known faces but bad choices aren’t only our prerogative. Stars do it as well. Heck, their bad choices go down in history and on the big screen. They can never live those down.

And we know that we all grow. Maybe we weren’t as woke as we are now. Maybe we didn’t understand the nuances of caste or race that we are aware of now. And just like us, perhaps these women also learned from their mistakes. And no, just because they made mistakes in the past doesn’t mean they can’t stand on right side of the fence now. This is called growth. Called growing up. When Deepika stood with the students at JNU, that was also a stance and we had problems with who she was siding it at that point too.

Growth is when you realise perhaps not every decision you took was right but then you can change that by standing up and doing the right thing now. Growth is speaking up. Priyanka even lives in the USA now, why is she not allowed to have a say?

Racism isn’t a cause only we are allowed to rage about and Deepika and Priyanka aren’t. No cause is limited to the people we deem fit to talk about it. Everyone can, and the more voices, the better. Let’s cut these women some slack and stop going after them all guns blazing when they choose to be silent or when they choose to speak up.

All lives matter and all voices matter. Let’s not forget that.

Kriti Sanon Opens Up About The Struggles She Faced While Making Her Way Into Bollywood. She Was Told She Wasn’t Pretty Enough