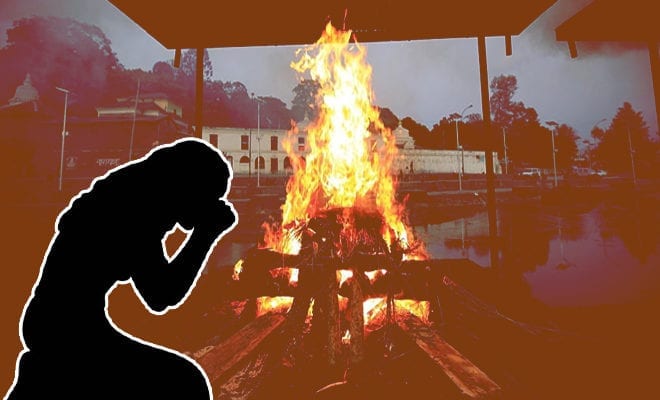 Although I am just 25-years-old and have entered what can be called the beginning of my quarter life crisis, it is safe for me to say that these are one of the toughest times the country has been in, in a long long time. Of course we’ve been at war, we’ve suffered through crashing economies before, but the enemy this time is more lethal than ever. Forcing us to stay confined, killing thousands of people on a daily basis and filling us with uncertainties about the future, this pandemic is taking away more than our loved ones, it is also taking away our sanity. Man or woman, we are all equally vulnerable.

As we ride the second wave of coronavirus, the fear of death and disease looms over our heads almost constantly and the worst hit is our mental health. Something that’s become obvious in ways ways. And grief can accelerate that. News has emerged that a woman who was mourning the death of her father due to coronavirus, leaped into his funeral pyre.

The 34 year old woman from Rajasthan couldn’t handle the news and decided to jump into the burning pyre of her father.

In a shocking incident in Rajasthan’s Barmer district, a 34-year-old girl jumped into the burning pyre of her father, who died of #COVID19 https://t.co/58dMz8VZyr

Also Read : In Gujarat, 500 Women Took Out A Religious Procession And Flocked To A Temple Maskless To Eradicate COVID 19.

Reports share that the woman was immediately pulled out, however she sustained severe injuries and was hospitalised with 70% burns. The woman is being treated at a hospital in Jodhpur presently, to which she was referred to after formerly being rushed to nearby hospital in Barmer.

The police elaborated on the incident, as they shared how it was during the funeral of Damodardas Sharda (73), who passed away of Covid-19 at a Barmer hospital on Tuesday, that his youngest daughter Chandra Sharda, made the daunting leap into the pyre. Prem Prakash, the station house officer at Kotwali police station said, “Damodardas Sharda had three daughters. His wife passed away some time back. The youngest of the sisters jumped on the funeral pyre.”

Although, the woman’s jump into the fire was rather reckless and would have been of no help to her or her already mourning family, we understand the kind of mental distress she’d be in because of losing a parent, to take such a drastic step. Guess, all we can do right now is take care of each other, and most of all, our mental health. These may be tough times, but we can get through these, but with a bit of support.

Also Read : Bharti Singh Breaks Down While Explaining Why She Doesn’t Want To Have Children Amidst COVID. It Makes Sense