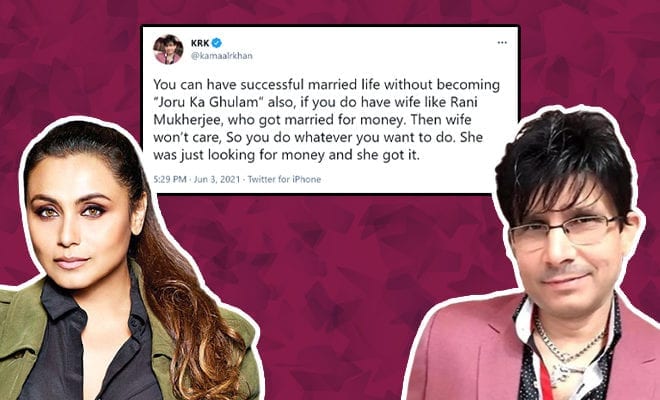 I just stumbled upon a video on Instagram which has clippings from several media interviews of celebrities. Someone asked Ariana Grande what she would choose between makeup and her phone, if she could use only one of these for the last time. And she asked if he thinks those are the most difficult choices for women. Another interviewer told Taylor Swift at an awards show – where she won an award – that she’d be leaving “not just” with a trophy but with several men that night. As if the latter is a bigger achievement and she said she won’t take a man home but rather go hang with her friends and her cat. Why are women scrutinized so much? Why do people assume naturally that women are ambitionless, talentless creatures who are just vain and out there to grab a rich man? This patriarchal mindset still exists and is often furthered by men like Kamal R Khan a.k.a KRK. I mean, we shouldn’t really be paying heed to his opinions because his credibility is down the drain, but if Malaika Arora can take time out to get back to her trolls once in a while, who are we mortals? KRK has trolled the entire womanhood here and how.

KRK took to Twitter to once again unleash onto the world his baseless and sexist comments. He wrote, “You can have successful married life without becoming “Joru Ka Ghulam” also, if you do have wife like Rani Mukherjee, who got married for money,” he wrote. KRK implied that Rani Mukerji married Aditya Chopra for money. He further wrote, “Then wife won’t care, So you do whatever you want to do. She was just looking for money and she got it.” So basically, you throw in money and women will just be your slaves and that’s what men look for in a wife? I hope other men are not as trashy as KRK. What is that stench? Oh wait, that’s coming from his mindset.

You can have successful married life without becoming “Joru Ka Ghulam” also, if you do have wife like Rani Mukherjee, who got married for money. Then wife won’t care, So you do whatever you want to do. She was just looking for money and she got it.

Time and again, women, especially actresses are called gold diggers when they marry someone rich. When Malaika Arora got divorced, a troll wrote some nasty things calling her a gold digger who catches herself a rich man and then divorces him to live on the alimony. She made sure to call him out and asked him to get his facts right. The fact is, she never took a single penny in alimony. Similarly, Melinda was trolled for wanting to live on maintenance money when she refused to take any.

Even Kareena Kapoor Khan was trolled for being a gold digger when she herself has been a successful actress with enough of her own money. When playback singer married a Switzerland-based restaurateur she was called a gold digger too. She got back saying she earns more than her husband.

So here we are, making our own money, being financially independent. But there you go, marry a man who does well financially and you get labeled a gold digger. This because men like KRK exist whose only shot to fame comes from feeding off the fame of legit celebrities. The only good his tweets do is remind us to take out the trash!

ALSO READ:Neena Gupta Sends A Gentle Reminder To Husbands Who Fail To Recognise Housewives’ Contribution. The House Belongs To Both, Not Just You!(Opens in a new browser tab)