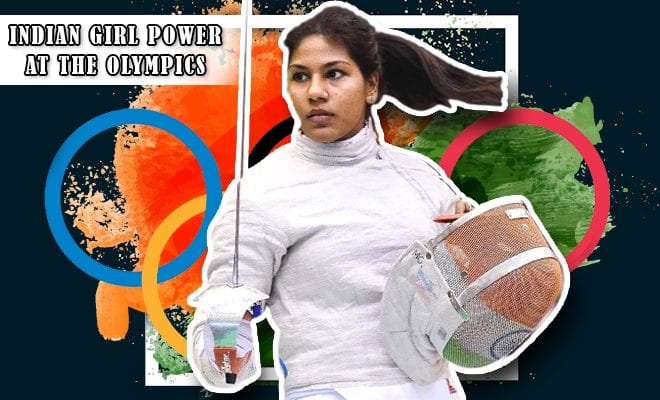 Indian Girl Power At The Olympics: Bhavana Devi Made History By Becoming The First Indian Fencer To Qualify For The Olympics.

People have only started taking an interest in women’s sports recently. Until a few years ago, the only sportswoman most people knew was Sania Mirza or PT Usha. It’s not easy being a sportswoman in India. You are underappreciated and made to listen to a hundred sexist taunts. And it becomes especially hard when a woman is playing a sport that only a handful of people have heard of. Fencing, for instance. The sport in general is unknown to most people. Neither fencers nor the sport is ever in commercial news. But all that changed a few weeks ago when 27-year-old CA Bhavana Devi qualified for the 2021 Tokyo Olympics in the individual sabre event. We are so proud!

Born to a Tamilian family, Chadalavada Anandha Sundhararaman Bhavani Devi hails from Chennai. She was introduced to fencing at the age of 10 when her school adopted the ‘Sports in Schools’ initiative started by the late Chief Minister J Jayalalithaa. Cut to March 2021. Bhavana Devi made history by becoming the first Indian fencer to qualify for the Olympics.

A post shared by C A Bhavani Devi (@bhavanideviofficial)

Also Read: Indian Girl Power At The Olympics: Mary Kom Is All Set To Rain Punches And Make Her Swansong A Memorable One

Bhavana Devi is currently ranked 42nd in the world and 1st in the country. Reportedly, she specialises in Sabre fencing, in which a typical competition lasts only 10 minutes. In 2014 though, Bhavana briefly thought about giving up the sport and she did not want to financially burden her family. In 2015, The GoSports Foundation came to her support and she currently trains under an athlete mentorship programme named after Indian cricketer Rahul Dravid. For the last five years, Bhavana has been training under renowned coach Nicola Zanotti in Italy.

We can’t wait to see her clutching a gold medal at the Tokyo Olympics!

Indian Girl Power At The Olympics: Archer Deepika Kumari Is Set To Hit The Bullseye Again!