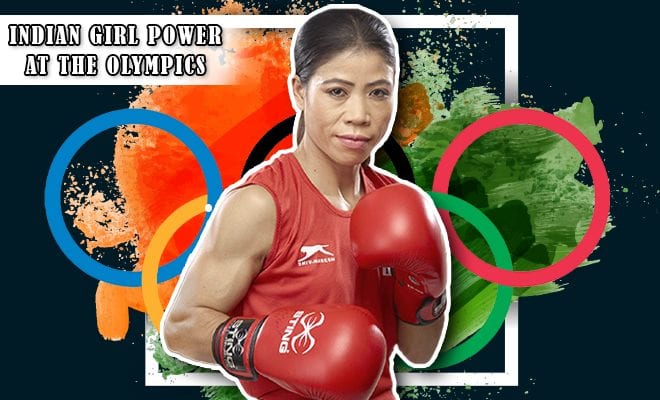 Indian Girl Power At The Olympics: Mary Kom Is All Set To Rain Punches And Make Her Swansong A Memorable One

Most of us know who Mary Kom is because of the biopic that was made about her. It starred Priyanka Chopra Jonas and it won numerous awards, including a national award. But there is so much more to Mary Kom than was shown in the movie. She is one of the most decorated pugilists and she will be representing our country in women’s boxing at the Tokyo Olympics 2021. We can’t wait to see her on the podium wearing a gold medal!

Six-time World Champion and Khel Ratna awardee Mary Kom has received numerous medals and accolades. To say that she is talented is an understatement. In this year’s Tokyo Olympics, Mary Kom is also the flag-bearer at the Opening Ceremony for our country. Sadly though, this is the last time she will be competing at the Olympics. Hence, it’s the last chance she has to turn her 2012 bronze medal into a gold one.

Mary Kom became the first female boxer from India to win an Olympic medal when she won a bronze at London in 2012. The Tokyo Games will be her second Olympic appearance and this time we will leave no stone unturned to get a podium finish. It will be the perfect departure for her from this professional sport. She bagged the spot on the Indian Contingent at Asia-Oceania Boxing Qualifiers in 2019 in Jordan. In the same year, she also won a bronze medal at the AIBA World Boxing Championship.

Talking about why the 2021 Tokyo Olympics would be her swansong, Mary told the Olympic Channel, “Tokyo will be my last Olympics. Age matters here. I am 38 now, going on 39. Four (three) more years is a long time. Pretty sure, I won’t be allowed to even if I am willing to carry on till Paris 2024.”

Mary Kom is a former World No 1 boxer who holds the third spot in AIBA rankings. Her last Olympics will be memorable not only for her but for us all because she is a role model. More power to her!

Indian Girl Power At The Olympics: Here’s Why We Have High Hopes From Top Seed Wrestler Vinesh Phogat