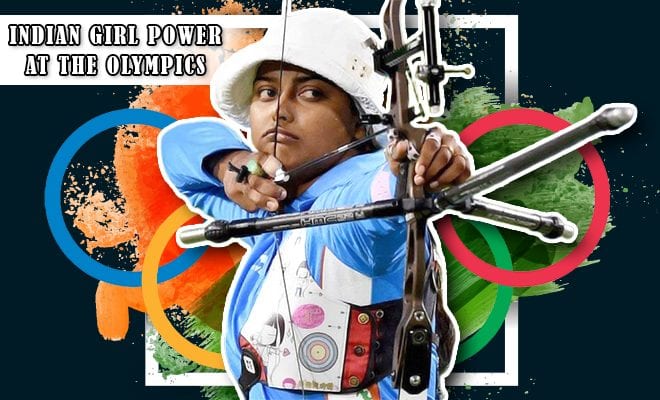 Indian Girl Power At The Olympics: Archer Deepika Kumari Is Set To Hit The Bullseye Again!

Albert Einstein once said, “Failure is success in progress”.

As cheesy as that quote sounds, there is some truth to it. History is full of iconic people who have tried and failed and then tried some more. These are the very same people who are able to leave their mark on the world. It’s primarily because they didn’t let adversity get the best of them. The athlete we are going to discuss today is one of those people. 27-year-old archer, Deepika Kumari is ranked at the number one position. She is an inspiration and one of our best hopes at winning multiple medals at the Tokyo Olympics starting next week.

At 16, Deepika established herself as an outstanding archer by winning gold in individual and team events at the 2010 Commonwealth Games in New Delhi. At 18, she found herself in the world ranking after winning the world cup. She was on her way to becoming the country’s youngest sportsperson to win an Olympic medal in 2012 London.

However, for complicated reasons, Deepika was forced to bow out in the opening round itself. However, as sad as that was, since then she has been at the top of her game. Overall, Deepika has won nine gold, 12 silver, and seven bronze in the world cups. This is a stark contrast to her Olympic career. In the 2016 Rio Olympics, Deepika lost to the Russian team in the quarterfinals. But her game and her journey are not defined by these losses. Deepika is one of the most skilled and gifted archers of our generation.

Merely a day before leaving for Tokyo, Deepika told the media that her failure to secure medals in the last two Olympics will “play on her mind” but she is trying to stay away from negative emotions. She said, “I don’t want a repeat anymore. It’s past but yes, that will play on my mind and there would be some pressure on the back of my mind.” She added, “So, it’s about trying my best to keep myself free of all those negative thoughts and take less pressure. It’s about focusing just on my shooting.”

With more than a decade of international tournaments, a Padma Shri and two Olympics under her belt, Deepika is a role model. The 2021 Tokyo Olympics are her best chance at winning multiple gold medals. She is, after all, competing in two categories, individual and mixed team. Deepika will pair with her husband Atanu Das for the mixed team event.

We can’t wait to see Deepika Kumari succeed at this year’s Olympics!

Indian Girl Power At The Olympics: Here’s Why Shuttler PV Sindhu Will Shine At The 2021 Tokyo Olympics