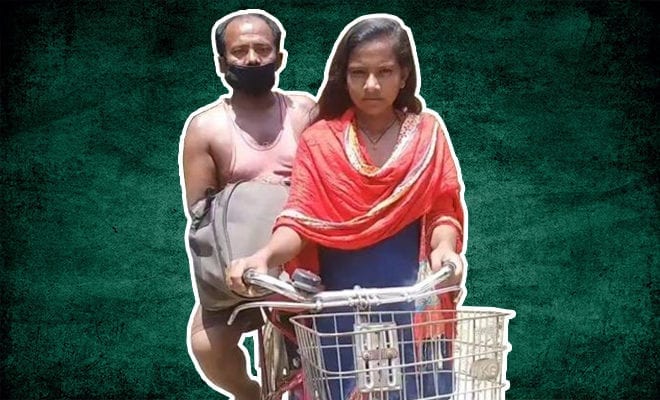 Last year, when the coronavirus had just started wreaking havoc in our country, no one wanted to believe that it would last more than merely a few months. We clung to the hope that COVID 19 would magically disappear. But that obviously didn’t work. Cut to today. Cases are surging, families are being torn apart by grief, frontline workers are overburdened, hospitals are crumbling and of course, there aren’t nearly enough vaccines. And amid all this chaos, every now and then, we hear heartbreaking tales of woe and destruction coupled with such courage. For instance, who remembers the girl who rode a cycle for 1200 km just to get her ailing father back home last year? It was an impressive feat, to say the least. But unfortunately, her father passed away a few days ago.

On 18 May 2020, 15-year-old Jyoti Kumari peddled for 1200 km, from Haryana’s Gurugram to Bihar’s Darbhanga, just to get her ailing father back home. Needless to say, she went viral overnight. Known as the ‘cycle girl’ her noble actions and resilient spirit were lauded and appreciated. In fact, Jyoti was one of the 32 children who were conferred with the Pradhan Mantri Bal Puraskar. She received a cash prize of Rs 1 lakh and was offered a trial by the Cycling Federation of India.

The father of Bihar’s 'Cycle girl' passed away after suffering a cardiac arrest. @hajipurrajesh https://t.co/eQH8X1bLoE

Also Read: Former Doordarshan Director General Archana Datta Lost Her Husband And Mother Within An Hour Of Each Other To The Coronavirus.

However, little did Jyoti know that she would lose her father just a little over a year later. On Monday, Mohan Paswan, Jyoti’s father, developed severe chest pain and collapsed. He suffered a cardiac arrest and passed away. An inconsolable Jyoti told the media, “I massaged his chest (cardiopulmonary resuscitation) when he complained of pain. But he could not survive.” Mohan was the sole breadwinner for their family. Jyoti has two brothers and three sisters. DM Darbhanga Dr SM Tyagrajan, who confirmed Mohan’s death, said that assistance will be provided to Jyoti and her family.

Hopefully, Jyoti’s perseverance will become the strength that gets her and her family through this difficult time.

The Girl Who Cycled 1200 km Carrying Her Father Has Been Offered A Trial By The Cycling Federation. We Salute Her Spirit

GET HAUTERFLY IN YOUR INBOX!
Related ItemsFeaturedFatherTrendingCycleBiharGirlGurugraamgirls' father passes away