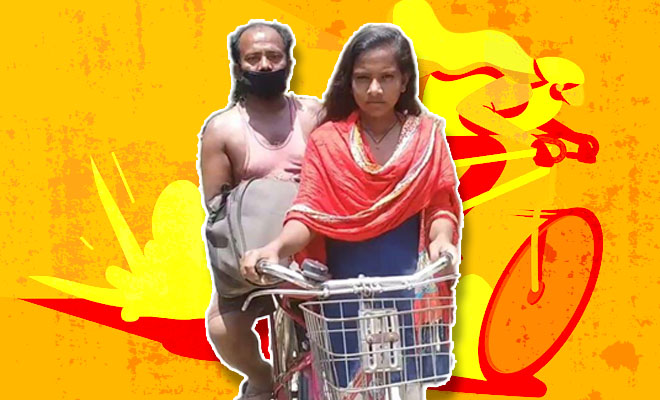 The Girl Who Cycled 1200 km Carrying Her Father Has Been Offered A Trial By The Cycling Federation. We Salute Her Spirit

We’ve talked extensively about our lockdown heroes. But no amount of praise is enough to do justice to their acts of courage, kindness, and selflessness. Apart from our brave doctors, nurses, police, and essential workers who have been fighting relentlessly, common people have risen above their situations to do some truly incredible work for their families and their communities. This lockdown may have brought out the worst in some people, but in others, we have seen warriors emerge. Fighters who won’t back down even in the face of a crisis.

Such is the story of 15-year-old Jyoti Kumari. The young girl cycled 1200 km from Gurugram to Bihar over eight days to take her ailing father to his native place. Her father had gotten injured in an accident, and hence was unable to drive an e-rickshaw. They feared that they would soon be thrown out of their home by the landlord, and hence Jyoti was compelled to take this drastic but brave step.

“Amid the gloomy situation, Jyoti suggested that we return home. I pointed out that we would not be able to find any trains or buses and my condition would not allow me to walk. She said we should get a bicycle.” her father said.

As it turns out, the right people taken notice of Jyoti’s story. She has been offered a trial by the Cycling Federation of India. The chairman of the federation, Onkar Singh, told PTI that if Jyoti passes the trial she will be selected as a trainee at the National Cycling Academy at the IGI Stadium complex in New Delhi.

“She must have something in her.” Singh said. “I think cycling down more than 1200 km is not a mean job. She must be having the strength and physical endurance. We want to test it. We will make her sit on the computerised cycle we have at the academy and see if she satisfies the seven or eight parameters to get selected. After that she can be among the trainees and she will not have to spend anything.”

“We spoke to the girl this morning and we have told her that she will be called to Delhi next month as soon as the lockdown is lifted. All the expenses of her travel, lodging, and other will be borne by us.” Singh further added. “If she needs to accompany somebody from home, we will also allow that. We will see in consultation with our Bihar state unit on how she can be brought to Delhi for a trial.”

Whether Jyoti qualifies or not, we are undoubtedly in awe of her spirit. She has shown grit and determination in a time that must be extremely difficult for her family. We salute her!

Everyone In This Neighbourhood In Venezuela Gathers On Their Rooftops To Share A Bottle Of Wine. Looks Fun But We Hope They’re Careful