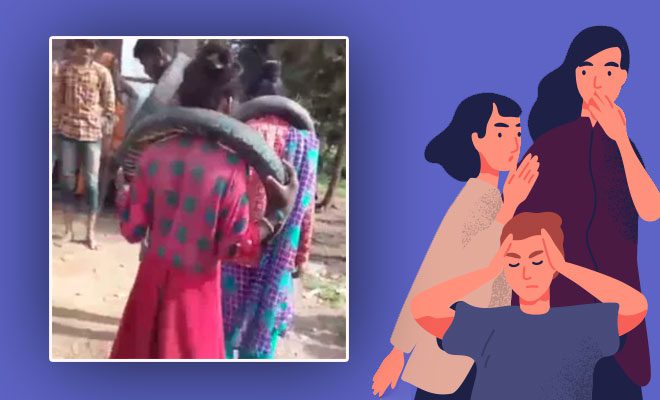 Couple Forced To Dance With Tyres Around Their Neck As Punishment For Eloping. This Is Sickening

Is it just me or with every passing day, humanity in this world diminishes by a little? Whether it be the Taliban imposing bans on the Afghan people and openly murdering Afghan women or whether it be couples getting punished for eloping in this country—humanity is the one suffering. And when videos of the inhumane behaviour go viral on social media, the netizens are the first to spot it and comment on it for being outrageous. A video of a man, woman, and a girl being forced to dance with tyres around their neck went viral on social media. And the reason ought to make you angry. It was because the couple was found to be eloping.

According to the Free Press Journal, on September 12, a video of the couple and the girl dancing with motorcycle tyres around their necks was shot in Kundi village where the incident took place. After which the video went viral causing outrage on social media from people who realised just how dehumanising this act was.

A young tribal girl, her friend and a man with whom she eloped were punished by the young girl's family. Family members put tyres around their necks 4 out of 5 accused have been arrested @ndtv @ndtvindia @GargiRawat @manishndtv pic.twitter.com/JJgrweGtIY

The man in the video was 21 years old and the woman was 19 years old, both of them were from Dhar in Madhya Pradesh. And according to the police, the couple along with a 13-year-old was forced by some people to dance with motorcycle tyres around their neck as a punishment.

Also Read: This Viral Video Of A Couple Angrily Throwing Their Garlands At Each Other During Their Wedding Is Hilarious

The 13-year-old girl in the village, who was also forced to dance with the couple, was punished for allegedly helping them elope. The police registered a case against five people and arrested three of them on Tuesday after the video of the incident went viral on social media.

Arrest by police is very good action. But the output of the arrest will not come. Simply they got bail and free. The accused will go for another crime. No meaning of arrest. It's all about eye wash. Tribal suffering will continue to another way.

I DARE YOU TELL ME #CASTE is a thing of the past. That reservation is unfair. That caste based violence don't exist. I hope you have enough brains to understand @Simi_Garewal in #AranyerDinRatri is a UC fantasy and bears no resemblance to reality. https://t.co/vDeWzRtwwC

Till these kind of uncivilised barbaric acts continue , we have no right to be proud of our society/country. We are sinking every day to a new low.

On Camera, Couple Forced To Dance With Tyres Around Necks For Eloping https://t.co/JnS5IgpVcd via @ndtv

Also Read: This Kerala Couple Have Been Living In A Forest For 20 Years After Being Ostracised For Getting Married By Their Community

What made the video even more enraging was the fact that there was a man in the video that was hitting the couple and the girl with sticks while they were dancing. And the inhumane part of it was that the person who shot the video could be heard laughing along with others present in the video.

According to the police, the 19-year-old woman had gone missing from her home in July this year. It was revealed that her family members were angry as she had fled with a man. They suspected that another young girl (seen in the video) helped the woman in fleeing from her home. And so when the couple returned home in the second week of September, they punished the couple.

Honestly, it makes me sick! How can people be so inhumane towards another person, and in this case, their own child. The viral video has attracted a lot of criticism and backlash from the netizens who watched it. And if you ask me, their enrage is extremely valid!

This Couple Engaging In PDA In Bihar Were Called Out, Abused By Locals. But Also, There Was A Moving Bike Involved