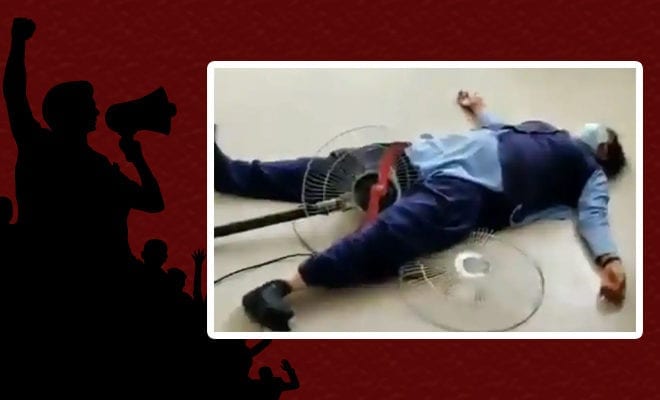 Everyone knows that Mahatma Gandhi is known as the father of our nation. He is revered and credited with being one of the most prominent freedom fighters. He drove the British out of our country without picking up a gun or a sword. If you paid any attention in history class then you know that even today Mahatma Gandhi is known for his staunch belief in nonviolence. Ironically though, a lot of people in our country haven’t learned a thing from his great feat. For them, violence is the answer to every question and the solution to every problem. I wish I was exaggerating but the rate at which vandalism and violent crimes are surging only prove my point. In fact, recently in Agra a group of angry men brutally beat up a nurse and destroyed hospital property because they thought their family member, who was a patient at the hospital, had succumbed to his disease. This is shameful. Especially considering that we are living in pandemic times.

On Tuesday, an angry mob created a ruckus at the Lotus Hospital in Agra. They not only vandalised the hospital but also brutally assaulted a nurse when she tried to intervene. All this started when the group of people thought their family member, who was a patient in the hospital suffering from Septicemia, had passed away. But alas, that was just a rumour. The nurse was thrashed so horribly that it rendered her unconscious.

Relatives of Irfan at Lotus Hospital in Agra thrashed the doctors & nurses on duty after his condition deteriorated.

Have posted this video specially for those who ask why UP CM @myogiadityanath is strict.

The guilty are absconding but will be caught soon. pic.twitter.com/68EZwfcsOa

Also Read: In Delhi, No One Came To Help This Woman Who Chased Down And Thrashed The Man Who Groped Her

According to reports, the family members of the patient, Irfan, got all riled up after a rumour about his death started spreading. They were caught on camera vandalising hospital property and harassing the doctors and nurses. They damaged the ICU and broke numerous glass doors at the hospital. When a nurse tried to intervene and calm them down, the angry relatives started thrashing her with a pedestal fan, a helmet and rods. Needless to say, she was severely injured and lost conciseness. Fortunately, she was rescued by the hospital staff in time. A case has been filed with the Agra Police and four people have been arrested for the mayhem they created at the hospital.

I understand that dealing with the death of a loved one is incredibly difficult. We’ve all lost people to this pandemic. But acting so aggressively on merely a rumour is unacceptable. There are healthier ways to deal with grief. These are pressing times and the least we can do is stay calm and not thrash the medical health professions fighting this war on our behalf.

A Man Thrashed His Wife For Being ‘Dark, Fat And Ugly’, Unlike His Girlfriend Who Is Slim And Fair