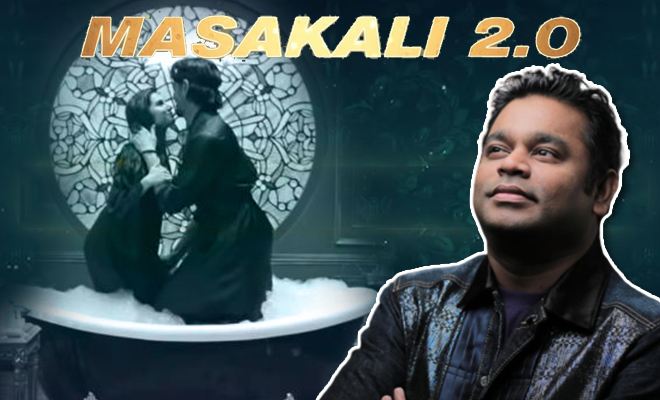 A.R. Rahman Criticised The Remake Of Masakali Urging People To Enjoy The OG Song. Can We Please Put A Lockdown On Remixes?

Yesterday, Masakali 2.0 was unleashed on this world and if I see the glass as half full, it really took our mind off things. I mean, for the first time in a long time, people unanimously felt horrified and not because of coronavirus or lockdown news. Sung by Tulsi Kumar and Sachet Tandon, it had all of us are still wondering why people deem it fit to stab our fond memories of the original version by music legend A R Rahman. Of course, the battle between art and business is an ugly one and it’s usually the latter that quite unfortunately wins. The fact that T-series decided to remake a beautiful song into a kind that becomes meme fodder within 24 hours of its release proves my point.

If we as an audience are so upset about the remake of this song, imagine being in A R Rahman’s shoes. He took to Twitter to express his displeasure about Masakali 2.0’s existence and rightly so. He wrote, “Enjoy the original #Masakali,” and shared a link to the OG song from Delhi-6. Along with it, he shared a picture of his statement about the same. “No short cuts, properly commissioned, sleepless nights, writes and re-writes. Over 200 musicians, 365 days of creative brainstorming with the aim to produce music that can last generations. A team of directors, a composer and a lyricist, supported by actors, dance directors and a relentless film crew,” the statement read.

This really makes us wonder if the remix had turned out to be good, would the audiences have a problem? A.R. Rahman’s dig at the remix is not even about the quality of song but the fact that it was reproduced. It’s a work of art that a crew created with so much effort and toil. Yet, another group just shuffles a few things and is now making money out of it and can claim it as theirs? Of course, if the remix is any good then it could be slightly more bearable, I assume. But Masakali 2.0 is like the disaster it would be if someone took Leonardo da Vinci’s Mona Lisa, drew a moustache on her and called it Mona Lisa 2.0.

Even the song’s lyricist, Prasoon Joshi took to Twitter to express his disappointment. “All songs written for #Delhi6 including #Masakali close to heart, sad to see when original creation of @arrahman @prasoonjoshi_ &singer @_MohitChauhan insensitively utilised. Up to the conscience of @Tseries. Hopefully, the fans will stand for originality. @RakeyshOmMehra,” he tweeted.

I feel bad for Prasoon Joshi because the lyrics of Masakali 2.0 are so bad it feels like this song was made as a spoof. Seriously, what the fuck is even “Masakali, masakali, kahan teri galli?” Is it a song about someone asking for an address? Support that with an equally bad video and we can see why the OG crew would deem this a conspiracy theory against art. The video is cringe-y, to say the least. In the original version, looking at Sonam Kapoor just dance and be herself, you could tell she has the “masakali” spirit. In this spoof, Tara Sutaria is lacking energy and it really doesn’t seem like she’s playing hard to get. It rather looks like she is genuinely disinterested.

ALSO READ: 5 Thoughts I Had While Listening To Masakali 2.0. Basically, It Involved A Lot Of Cringe.

Really, we could have lived our lives without having to witness this and at least, not in 2020! In fact, the video seems like a remake of the remake of The Humma Song from Ok Jaanu and that too poorly executed. I really feel now is the time to put a lockdown on remixes!

ALSO READ: 5 Thoughts I Had While Watching Tiger Shroff’s I Am A Disco Dancer 2.0. Definitely Ki, Ek Aur Remix? No!