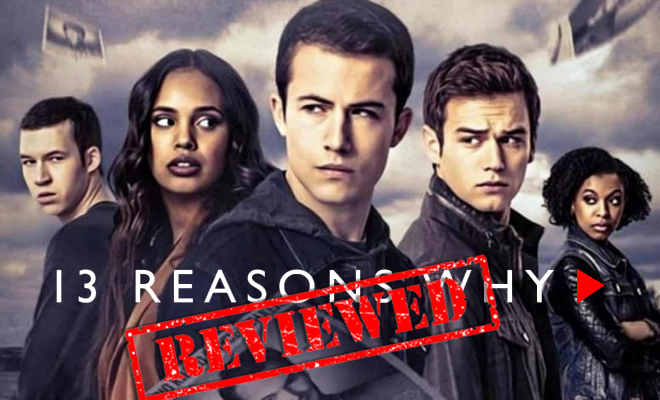 13 Reasons Why Season 4 Review: Confused And Soulless, With A Heartbreaking Series Finale

When 13 Reasons Why Season 1 arrived on the block in 2017, it was full of intriguing characters, high school tropes played out as cautionary tales, and an interesting narrative tool—Hannah Baker’s (Katherine Langford) tapes—to tell a story that needed to be told. It promised education and help in understanding the increasingly complex and secretive lives of high-schoolers today, and highlighting the mental health issues that plague them at such a formative time in their lives. Cut to 13 Reasons Why Season 4, and even Dylan Minnette’s (Clay Jensen) consistently sincere performance cannot salvage this bungled mess.

And yet, I was hooked to bingeing the entirety of this truncated 10-episode final season (the other three seasons each had 13 episodes). Why? Because even when the show had lost sight of what it was and what it wanted to say, I had grown invested in the flawed characters that I had met in Season 1. Since this was the end, I stayed along for the ride because I thought that even though the journey sucked, the destination would be worth it all for their arcs. But as the show has proven time and again, there’s a tragedy waiting just around the corner.

Welcome to your 13 Reasons Why Seasons 1-3 refresher tape

Last we saw Clay Jensen and his Liberty High School buds, they were huddled around and making a pact to keep yet another disturbing secret. While Season 2 ended with an almost school shootout by Tyler Down (Devin Druid), averted by Clay, Season 3 was spent babysitting Tyler and figuring out who killed Bryce Walker (Justin Prentice).

We find out that after Zach Dempsey (Ross Butler) beats up Bryce at the docks and throws his phone in the river, Alex Standall (Miles Heizer) and Jessica Davis (Alisha Boe) arrive at the scene. Alex tries to help Bryce up, but when he hears him say that he is going to ruin Zach’s life, Alex is overcome with rage and throws Bryce into the water, where he drowns and dies. Thanks to Tyler’s police complaint against Montgomery De La Cruz (Timothy Granaderos), he is arrested and thrown into jail, where he gets shivved for being a “child rapist”. Ani Achola (Grace Saif), in her interrogation by Deputy Standall (Mark Pellegrino), finds out that Monty is dead, convinces the Deputy that Monty killed Bryce and urges him to shut the case. The Deputy realises that his son Alex might have been the killer, but goes along with Ani’s story to protect him.

This new secret brings Clay, Jessica, Alex, Justin (Brandon Flynn), Zach, Tony (Christian Navarro), Tyler, and Ani together, not as much as friends as each other’s secret keepers. However, their lies threatened to get exposed when Winston (Deaken Bluman), Monty’s short-term love affair, reveals to Ani that he was Monty’s alibi for Bryce’s murder and is determined to expose the real killer.

The students of LHS cannot, and I mean CANNOT, catch a break, which makes you think this is probably the worst high school in the entire country. But then again, we’ve seen Gossip Girl, Riverdale and Elite so we know high school is more dangerous than the Hunger Games arena. Once again, as the characters begin their final semester of senior year at LHS, one of them is dead. We see the entire season then retrospectively, and this time finally, through the eyes of Clay Jensen.

After seeing Hannah Baker’s ghost all through Season 2, Clay now sees ghosts of Bryce and Monty, as his mental health increasingly deteriorates throughout the season. It’s the whole spectrum of visions, dissociation, loss of time, rage episodes and anxiety attacks. Justin, now Clay’s adoptive brother, tries hard to remain clean after rehab and work towards getting into college. Jessica is haunted by a taunting Bryce’s ghost, and has a new boyfriend—Diego (Jan Luis Castellanos), a football player who was close to the deceased Monty. Alex is discovering his sexuality, Tyler is discovering a whole new meaning to his life, and Tony is trying to grow up a little too fast now that his family is deported. Zach turns into a devil-may-care drunk with little regard for his future. And Ani, is just hovering there, keeping Winston off everyone’s case.

We don’t get villains this season. Instead, the writers let the past deeds of the characters return through newer situations to make things difficult for them. Diego, Winston and Estela (Inde Navarrette), Monty’s sister, are the new characters with an agenda to expose how Monty was framed for killing Bryce. Meanwhile, the adults go full blown Big Brother on the high schoolers—there are cameras, metal detector and spyware apps on phones, and a legit police state ensues in the school.

But let’s not forget, amidst all this mess, these kids will need to keep up their GPA, graduate, get into a good college, cover up a murder…. And give us enough fan pay-off in the final episodes to make it a worthy series finale with no loose ends.

Who’s in that coffin? The show’s writing and flawed self-righteousness!

One of my pet peeves about teen dramas like Pretty Little Liars, Gossip Girl and Riverdale has always been this—why can’t these kids and their parents just talk? As a desi kid, I know that can be hard, but most of these parents seem pretty cool towards the end, so what gives? But okay, fair, I get it why the adolescents are keeping their secrets. But what’s the adults’ excuse? How are these school principals, guidance counsellors and parents so darn naïve? Especially, after they have access to CCTV footage and their children’s texting history?

13 Reasons Why set out to highlight mental health in a huge way. Even in the face of harsh criticism for being counterproductive and harmful, the show produced by Selena Gomez continued to flirt with the line between education and entertainment. Until Season 2, I believed them. But after that, they were as lost as their protagonist, Clay Jensen. Remember how he set off to be the guy that stops people from losing it? Well, now he’s the guy who is losing it, and dude’s not taking his own advice about letting someone help him.

If Season 3 was spent somewhat redeeming a self-confessed rapist and letting high schoolers think they can rehabilitate a potential suicide shooter, Season 4 goes on to convince you that covering up a murder committed with good intentions is okay. What’s worse, the police department is on board too. What’s even worse is that while these kids should’ve spent Season 4 coming to terms with the gravity of what they have done, they spent it instead being inexplicably self-righteous about their cause.

Take Jessica, for example, who advocates for women’s rights and consistently opposes the security measures imposed by Principal Bolan (Steven Weber). And yet, she is covering up a murder. Zach’s descent into debauchery is so steep it makes as much sense as Ani’s loyalty to this group. They aren’t even friends; and yet, there’s some unswerving need to be there for each other and we’re rarely shown why. The worst hand is dealt to Clay, who is not just a danger to himself but to everyone, and should’ve gotten intensive care instead of being allowed to roam around and go on camping trips. How is anyone seeing all this and allowing it to happen? Especially after the town has lost four kids to neglect already!

Could there have been redemption?

Oh yes, if there’s one thing that 13 Reasons Why has taught us, it’s that redemption is possible for everyone, no matter how far gone they are.

I loved Alex’s arc and how it ended, especially the prom episode, which was one of my favourites. It proved that in an alternate genre, this show could’ve graduated to being smart, funny, and mature, not repeating its past mistakes. The music of this show, as always, was top notch, We get songs from Vampire Weekend, Gordon Lightfoot, ESKMO (they’ve done the opening credits too), JUICE WRLD, Grizzly Bear, Beach House, St. Vincent and others, and is one of the biggest reasons I enjoy this show.

The other reason is the performances. Dylan Minnette, Brandon Flynn, Alisha Boe and Christian Navarro have been my favourites since Season 1. And they do not disappoint in this season too. Minnette is so convincing as an unravelling Clay, that I was scared of what he would do next.

The thing about redemption is that you have to seize that chance. Disappointingly, the show forgets to take its own advice. Through Clay’s arc, it had the chance to bring in a critical discussion on mental health. His scenes with Dr. Ellman (Gary Sinise) were some of the best in the season, diving into the psyche of the protagonist who is everyone’s fixer and secret keeper. But somehow, in the end, something felt missing. Clay was still a little haunted, I felt.

As the protests against unchecked police accountability after the death of George Floyd rage across America, certain plots feel even more ill-timed. While the show has managed to meaningfully diversify its cast and character roster, it had the chance to elaborate more on issues like racial profiling through Tony and Diego’s characters, or the fact that Clay and Justin get away with doing much worse than these two. However, while some of these topics are touched upon, they aren’t sufficiently explored.

ALSO READ: Dhruv Rathee’s Comparison Of Black Lives Matter To Feminism Completely Misses The Point And This Needs To Stop

I used to believe that the series does justice to LGBT representation; however, with a twist in Justin Foley’s arc this season, I felt like I would’ve wanted some more depth in exploring sexuality.

The length of the episodes does make the season feel stretched, especially when episodes with good potential, like the one with the camping trip, don’t completely live up to it.

And finally, the whole idea that high school is a difficult place just got turned into this bizarre hyperbole, making me wonder, did I really have the full high school experience?

So many ask me, why do I still watch Season 4 if the past seasons have been disappointing? Well, the answer might probably be spread over a few tapes. But in nutshell, it’s mostly the love for these characters, that despite all they’ve done, you want to root for? It’s a horror movie, and the characters are making stupid decisions, and yet, you want them to be safe, and have a happy ending.

Of course, 13 Reasons Why Season 4 unnecessarily wrecked the one happy ending I was truly hoping for, and for that I shall never forgive it. But fans of the show will be satisfied with the pay off they get during the 1.5 hour final episode. Yes, you’ll see dead people. Yes, you might shed a few tears. And yes, it’ll be bittersweet as hell. It could wreck you. It did me.

Watch Season 4 only if you’re invested in the characters and want to see them finally bury their traumas and find closure.

13 Reasons Why Season 4 is currently streaming on Netflix.