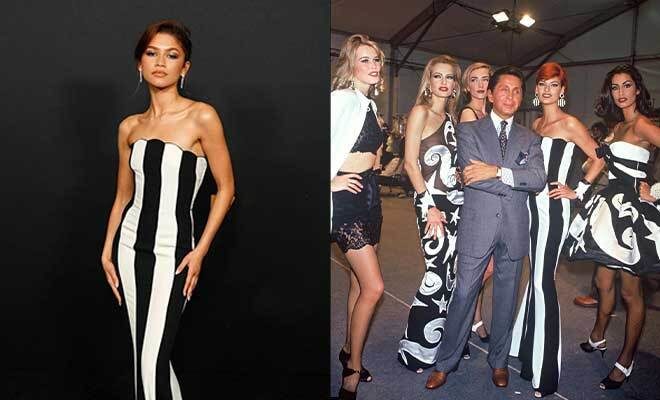 Celebrities across the globe have been celebrating fashion in all its phases. From donning the trend’s best pieces to wearing their thoughts through powerful designs, popular faces have never shied away from projecting their ever-evolving fashion sensibilities. And while I talk about these famous figures, who are time and again lauded for their sartorial picks, the name Zendaya can never be missed. Icon for the internet generation, the young star in a span of a few years has carved her impressive impression on the audiences’ minds. Be it her choice of narratives in films or the outfit she chooses to walk down the red carpet in, Zendaya has been associated with only the term ‘best.’ Spotted wearing a vintage Valentino gown at the virtual red carpet premiere of Euphoria‘s second season, the 25-year-old star made a spectacular appearance last night. Styled by image architect, Law Roach, who often is credited for putting together some amazing looks on Zendaya, the actress dug out the black-and-white number, from the archives of Valentino’s 1992 collection. Taking a rather simplistic styling approach, which is a not-so-general term in Zendaya’s history of red carpet looks, the star came dressed in the beautiful dual-hued, strapless, long dress with Bulgari Serpenti Viper diamond drop earrings and a diamond ring. She settled for a neat hair bun and subtle makeup with well-defined eyes.

Making a conscious choice yet again, the vintage Valentino attire holds a lot more significance, from its last appearance on supermodel Linda Evangelista, who wore the outfit with a pair of statement earrings in the same shade and a wrist cuff-bracelet during the Italian fashion house’s spring/summer show, in the year 1992. The star-studded night for the premiere of Euphoria‘s season two, also witnessed celebrities including Sydney Sweeney, Hunter Schafer, Alexa Demie, Jacob Elordi, Angus Cloud and many more who came dressed up in the best of Balenciaga, Versace and Prada.

While it’s definitely not the first time, that the Euphoria star, chose to wear vintage designs. Being visibly vocal about her take on sustainable fashion, intending to redefine timeless clothing, she opted for a black gown from Roberto Cavalli’s autumn/winter 2000 collection, at the Ballon D’Or ceremony in Paris in 2021. Giving the black dress a spider man twist, she added a gold, serpentine-inspired spinal-cord detailing to the back.

Furthermore, she had all eyes on her, by wearing a vintage Versace piece back in the year 2021 for the BET Awards. Opting for the violet and neon green dress from Donatella Versace’s spring/summer show in 2003, the actress pulled out a piece of history by wearing the breezy dress 18 years after Beyoncé wore it for a performance at the same award show (interesting right?) in 2003. Well, Z is truly a star.

Wrapping their thoughts in the face of fashion, movie stars apart from Zendaya have been churning out some ‘old’ designs for present-day appearances. Be it repeating their own iconic outfits or reviving a celebrated vintage attire, stars are bridging the gap between the dreamy land of film universe and real-world problems. From Kim Kardashian, Tiffany Haddish, Jennifer Aniston to Emma Watson, these celebrities and many others have been taking greener steps on the scintillating red carpet by opting for a pre-loved closet, something the generation today is cheering for.