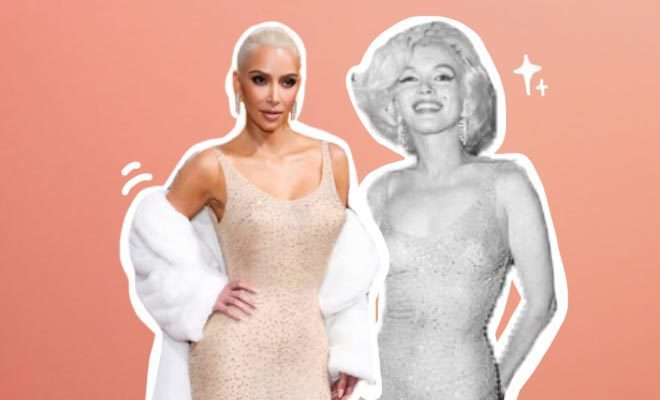 Historians Are Not So Happy With Kim Kardashian’s Idea Of Wearing Marilyn Monroe’s Iconic Dress To The Met Gala. We Kinda Agree!

Vintage has become the new cool for celebrities. A piece of tribute and sustainability, Hollywood stars have been flipping through the pages of a history books to shine on red carpets today. Then be it, Zendaya or Hailey Bieber, celebs have been making heads turn with their special vintage choices. And the newest addition to this list is Kim Kardashian. The woman who collected some extra points or probably all of ’em on behalf of her Kardashian Klan, at this year’s Met Gala, has failed to appeal fashion experts and historians.

Digging through history, Kim K arrived for the big ball in a 60-year-old custom Jean Louis gown. Studded with 6000 hand-sewn crystals, Kim K’s special style for the evening was a well-kept piece belonging to the legendary Marilyn Monroe. A dress that holds a special place in America’s costume history, was tailored to fit Ms Kardashian’s Gilded Glamour uniform for the night. While just like the dress, Kim too didn’t fail to shine even after some concerning endorsement of her “weight loss” and “starving” days to fit in the piece. While the internet sure did love Kim’s choice, there is a section that wants explain why it wasn’t the smartest of picks.

Taking the case study of Kim’s dressing up game for the Met in their hands, historians and Marilyn Monroe experts have now shared their two bits about the not so glimmering aspect of Kim’s sartorial decision. According to a report by People, a professor of fashion history at the Fashion Institute of Technology, called the move “irresponsible and unnecessary.”

Why? Because the outfit certainly has a huge role to play in the history of fashion, perhaps more so because it belongs to one of the most celebrated icons in history–Marilyn Monroe. The dress in question was worn by Marilyn in the year 1962 when she arrived to sing “Happy Birthday” to then-President John F. Kennedy. As glittering and glamorous as it looks, Marilyn’s silhouette style was much ahead of its time, and indeed displayed a strong narrative of women’s relationship with fashion as an act of liberation.

And with Kim K appearing in a same outfit for the Met Gala, has many experts saying “Such an iconic piece of American history should not be put at risk of damage just for an ego-boost and photo-op.” Well, that’s true. The story behind the iconic piece also reveals how much Marilyn wanted a dress to be a “one of a kind” piece and something that only fits her while instructing Academy Award-winning designer Jean Louis. It also expresses the significance of the garment, and its concerning damage caused by Kim’s many problematic attempts to fit in it, one being the ‘crash diet’ and the other way being the alleged ripping off the dress. He also suggests that the addition of a white fur coat, which Marilyn too wore and dropped before her performance back in 1962, was a mere shield to cover up the stressed seams of the dress.

Furthermore many pointed out the chances of such an iconic piece being ruined in a red carpet event, which was otherwise stored in a temperature-controlled room for preservation. Calling the museum’s decision of even allowing this kind of loaning “unethical” and an attempt to put a historic piece in danger caused by ripped seams, sweat stains and makeup is a cause of concern. Many also believe that this will lead to the abundance of requests by celebrities to flaunt a piece of history for something as usual as a red carpet.

Also Read: Lili Reinhart Slams Kim Kardashian For Promoting Crash Diet To Fit In Her Met Gala Outfit. Well, Someone Had To Say That

Weighing in on Kim’s confession about her crash diet to fit in the piece, a professor shared why such a message is concerning for the audience today. Well, this also brings our attention to the politics of the “national treasure” the dress in this case, which draws our attention towards the contrary beliefs of the famous figures who wore it. I mean, we sure know Kim’s ideologies and perspective don’t fit the ones scripted by Marilyn’s legendary persona. And while wearing vintage is cool, experts think it’s not a wonderful thought to allow even a slice of mistake.