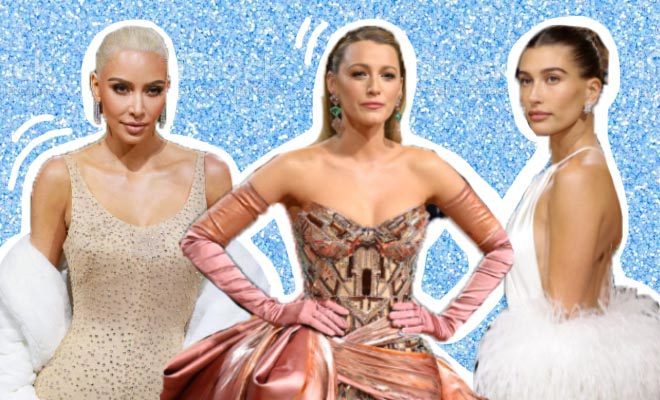 Sitting in your PJs and assessing all the glamour at this year’s Met Gala is a different feeling altogether, with the inner fashion student in me jumping on the couch coz the biggest night of the year has departed in glory (come back soon, please). Returning for another spectacular round, Met Gala brought Hollywood’s biggest celebrities back on the red carpet, although Zendaya’s jaadu was a big miss this year. From Kim Kardashian, Gigi Hadid to my favourite Blake Lively, stars stitched stories and style to their regency core attires as they dressed up for Met Gala 2022’s– ‘Gilded Glamour.’ Taking the lead yet again, ladies shined on the red carpet with men sticking to old-school white ties and soon-to-be-retired tuxedos. While headgears went missing from the scintillating carpet, coz yaar Gilded age hain one must own the crowns, many celebrities just brought with them a snooze fest, that I am sorry but didn’t serve at all.

Talking about one amongst the best-dressed stars of the evening stars Kim Kardashian, Hailey Bieber might have resorted to easy-looking silhouettes but had special details and tributes for the audience to watch out for. Yes, that’s right! Making the most of the beauty of designs, starry silhouettes served a hidden narrative and paid homage to America’s history makers at this year’s Met Gala. So, shall we skip to the good part?

Let me tell this loud and clear, that our beloved Kim was perhaps the only Kardashian who made an effort to slay at the big gala. Arriving with beau Pete Davidson (who was basic pro max), Kim made a stylish appearance in a custom Jean Louis dress, no ordinary number but a starry fit that the iconic Marilyn Monroe wore in the year 1962, as she sang “Happy Birthday” to President John F. Kennedy. An iconic performance and moment in American history, Marilyn’s glitter number became an integral part of America’s costume history too. Giving her usual outings in Balenciaga a break, Kim’s special tribute to Marilyn looked nothing short of a glitter dream. Decorated with close to 6000 hand-sewn crystals, the slim-fitting attire was teamed with a white fur coat, exactly how Marilyn wore the piece in the first place. While I am totally in love with Kim’s choice this year, I am not sure if reducing some extra pounds for the big day and advertising the same was a good idea.

Wearing a custom Atelier Versace, Blake Lively was a true red carpet queen. Blake who arrived with husband Ryan Reynolds, had all eyes on her as she unwrapped her metallic, gold and copper gown to display its many hidden colours. Mirroring the iconic transformation of New York’s Statue of Liberty from bronze to oxidised green, Blake’s spectacular gown featured 12 zodiac constellations decorating the ceiling of Grand Central Station, and hints of New York’s Empire State building. Her precious crown also embodied 7 tiers and 25 stones to mirror the Statue Of Liberty’s 7 rays and 25 windows (genius). In many ways, Blake exhibited the visible transformation in America’s architecture during the Gilded Age. Applause for the queen.

A sweet homage to America’s female history makers, Hillary arrived in a flouncy red gown, with attention seeking details. While the sheen Altuzarra gown looked nothing too great from far, Hillary’s off-shouldered gown featured names of Madeleine K. Albright, Harriet Tubman, Eleanor Roosevelt, Clara Barton and Abigail Adams, women she deeply admires. Paying tribute to the architects of America’s golden history, the former secretary of state, displayed the “spirit of America” to mark her attendance at this year’s Met Gala.

Rooting for minimalism, each time Hailey arrives for Met Gala, she chalked out a simple yet memorable look for the big night. Wearing a sheen white, Saint Laurent gown with a halter neckline and waist-high slit, Hailey arrived to pay tribute to supermodel Jerry Hall’s iconic YSL spring/summer 2002 runway dress. Definitely a mood board that turned into reality, Hailey teamed the look with a similar fur overcoat and black sheer stockings sneaking through the side. Not so gilded glamour, but vintage at its best.

Gabrielle dazzled in a custom Versace silver gown at the Met Gala, which too wasn’t an ordinary piece. Featuring a bold red flower clinging to her waist, and long feather and flower laden trail, Gabrielle’s look paid homage to the shift in roles of women and the emerging Black activism during the Gilded Age. The details offered by the headlining red flower is in remembrance of women’s rights activist and first African-American woman to win a Tony Award for Best Actress in a Musical–Diahann Carroll’s gown.

Also Read: Simone Ashley Makes Her Stunning Debut At Met Gala 2022. She Truly Is The Object Of All Our Desires In That Lovely Outfit!

Ryan Reynolds’ Reaction To Blake Lively’s Met Gala 2022 Dress Reveal Has Tweeple’s Attention And Can We Blame Them?!