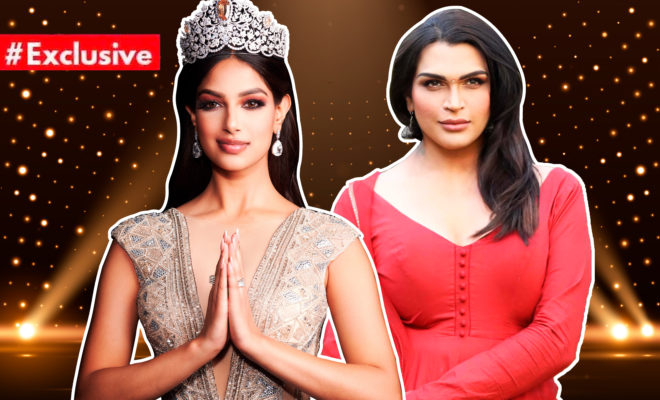 The crown is finally home after 21 years! Harnaaz Kaur Sandhu has officially been crowned Miss Universe 2021. A big win for the entire nation against contestants from 80 countries, the Chandigarh based 21-year-old actor/model is now the 70th Miss Universe 2021 and India’s third beauty to have won this title, after Sushmita Sen and Lara Dutta. The 70th edition of the event took place at Eilat in Israel. Apart from her winning answer and excellent presentation skills on the big stage, what caught our eyes was the winning gown in silver. Designed by popular Indian designer Saisha Shinde, the ‘winning gown’ as referred to by the designer herself, is a visual representation of Harnaaz Sandhu’s personality and dreams. 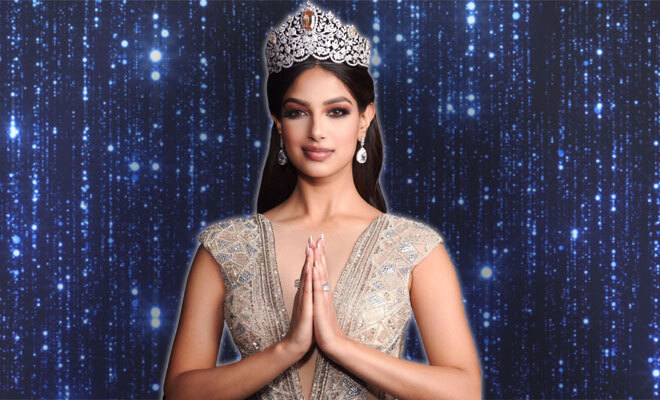 Curated with a blend of two beautiful shades of silver and champagne, the scintillating show-stopper attire is a tailor-made piece with emotions weaved in, paying homage to her home state Punjab.

Unveiling the many aspects that went behind the making of the ‘winning gown,’ designer Saisha Shinde takes me through her inspiration Sushmita Sen for the designs and her most memorable moment throughout the journey with Miss Universe Harnaaz Kaur Sandhu.

Q. What was your first reaction, looking at Harnaaz Sandhu being crowned Miss Universe while wearing your outfit?

Saisha Shinde: It’s always nerve-racking when you see your outfits on celebrities and for that matter, Miss Universe. This is my fourth or fifth time dressing a Miss India. But every time, it sort of scares you and it gives you goosebumps. And this is, of course, the first time that a Miss India I dressed has not only reached the top but won Miss Universe. We had a watch party with my friends and we were jumping, everyone was screaming that we have won Miss Universe and she’s wearing my gown. It was a magical moment.

Q. I have been watching your Instagram stories wherein you’ve shared the entire process, from sketching the gown to the finale. What does it take to make a winning gown?

A: Thank you. You know, I think when you work with honesty and you do a lot of research, you can never go wrong. When I met Harnaaz Sandhu for the first time to discuss the gown, she was very sure that I don’t need to ask her anything. She said, “I trust you blindly.” Because she had dreamt of that specific moment as well for a very long time that she would be having such a meeting about designing her Miss Universe gown. That itself is so overwhelming and she got very emotional. So I got to see a side of her that was something I’d never seen before… extremely grounded, extremely humble. I knew that I had to give it my all, because I really wanted this girl to have an amazing gown.

Then, of course, our research started. Harnaaz is from Chandigarh, Punjab, so we thought phulkari motives, and then how to get that incorporated in the gown but not make it very obvious was the next step. I didn’t want any phulkari motives on her body, but at the same time, how do I incorporate that subtly? This is why we had those mosaic patterns all over the gown. They were symmetrical, which is the basis of the phulkari embroidery. And that’s essentially where it started, sort of full-body motives with linear lines.

Q. You have defined the gown in three parts that represent Harnaaz Sandhu’s personality and aspirations. Can you share with us your idea behind it?

A: When I met Harnaaz, I saw that she is so eager to learn. You know, she started off with not knowing a lot about makeup techniques and stuff that are essential for a beauty pageant. But eventually, when I met her, I realised that I was right about her hunger to learn. So that is where we thought these lines in her gown also make sense because they are moving forward. Another thing about Harnaaz, she’s very grounded. She’s someone who’s so rooted in India and she doesn’t make a fuss about admitting it. That’s why, for me, it was very important to incorporate the phulkari motif while making it look modern. And then, of course, there was one element of embroidery which we had to remove because it was drowning her. We gave the lines at the sides in a linear fashion. But that was one element of her personality from the gown that was removed, technically.

Q. Were there any particular inputs given by Harnaaz in the gown?

A: I felt so bad for her because she really wanted to wear orange. I made a couple of gowns for her, one was a royal blue, one was orange, and one was the silver that she wore. And all of us, when we saw that silver gown on her, including herself, we all felt, “This is it! We have to seal the deal. This is the gown.” And the one thing that was breaking me was that Harnaaz wanted an orange gown and I couldn’t give her that in any way whatsoever. So I made sure that I stitched an orange fabric patch on the inside of the silver gown that she finally wore. So if you see the gown from inside, you know, there is an orange patch attached inside!

That was one small little thing that I wanted to do for her because she really wanted to wear orange. It’s her lucky colour and lucky it was!

Q. Harnaaz Sandhu has been an advocate of sustainable fashion. Was there any part of her outfit or the process that represented this idea?

A: People think that sustainable fashion is only about the fabric. Sustainability is also about labour. How much are the craftsmen making out of it? Are they just making meagre amounts of money off it? And the entire profit goes to the designer and the credit goes to, in this case, Harnaaz, who wore it and made it famous. So it’s also about that. I made sure that my team was paid a lot more for this outfit because apart from the fact that the gown was a lot of work, it also had to be created in a very short amount of time. So I made sure that my labour was taken care of beautifully, while I was making this gown. Secondly, the embroidery materials that we’ve used in the gown are materials that were lying in the office. We did not want any form of wastage, which is why Harnaaz Sandhu insisted if we could use the embroidery material lying in our office, instead of wasting it and throwing it away, then it would be better.

The materials that I’ve used in the gown are things that I’ve never used before. But I thought, let me work around this and let me see how this works for me. Which eventually now became my trademark. So, yeah, that’s essentially how we tried to get the sustainability angle in it.

Q. Was there any particular reference or inspiration for the gown?

A: The starting point for me was the gown worn by Sushmita Sen in 1994 when she was crowned Miss Universe. It was this champagne silver and it also had a lot of these motives running around her shoulders and sleeves. So, the initial base was that, because I felt that Harnaaz was very similar to Sushmita; very, sweet, very honest, very pure, but when she talks there is this boom, you know? So that was roughly the starting point as well.

A post shared by Pageant and Glamour – INDIA (@pageantandglamour)

Q. What are the dos and don’ts when designing an outfit for a global stage like a Miss Universe pageant?

A: First and foremost, you need to make sure that what you’re producing is extremely original. It has to be an original design. Second, the finishing has to be exquisite. And finally, of course, you know Miss India winners have a very quintessential image. They’re not, say, a Miss South America; they’re Miss India. And there is a specific expectation of what a Miss India should look like. She has to be extremely sophisticated, she has to be extremely regal and she can’t be over the top, it has to be a balance and that is what we visually wanted to incorporate. But at the same time, making her outfit unique, which is always a challenge,

Q. What was your takeaway from this entire journey and what is that one thing you will always remember? 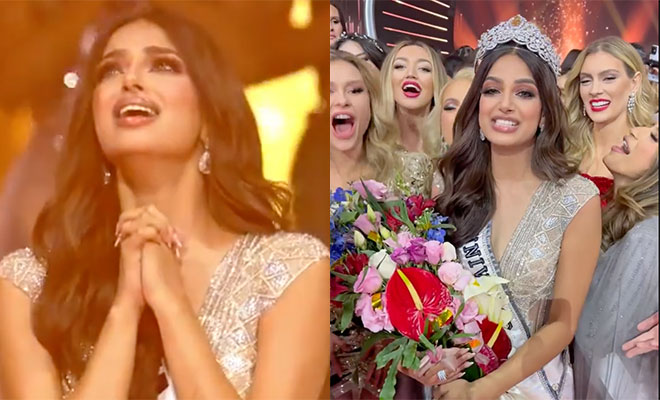 A: So, last night I spoke to my mom and I was really low. I told her, you know, something’s just not working. And every time I’m trying to achieve a goal, something falls short. And my mom told me, “Keep patience, believe in yourself, it will happen.” We then went on with our lives the next morning and I was watching Miss Universe and Harnaaz not only said the same thing but also went on to win Miss Universe. So that was like a goosebump moment for me! And the most special moment for me in this entire journey was when Harnaaz did the very first round of fitting for the gown; she prayed and she started crying. She said, “This is my gown, this is what I always dreamt about and I will never, never, never forget that day. Now of course, I’m never going to forget that day. It was the day I realised, this girl is a winner.”