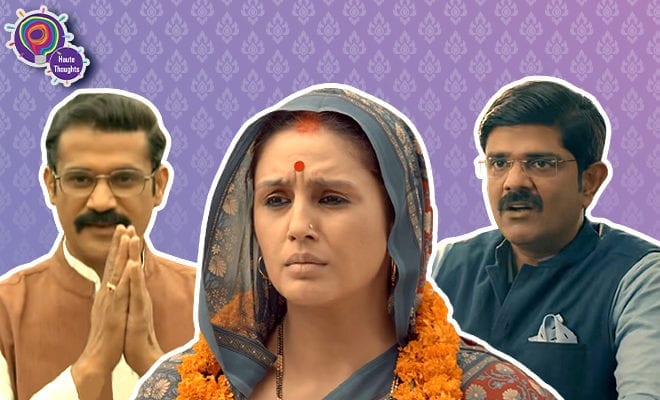 5 Thoughts We Had About ‘Maharani’ Trailer: Huma Qureshi Is A Reluctant Queen In This Game Of Thrones Set In 90s Bihar

Been a while since we saw Huma Qureshi on our screens, isn’t it? I mean, sure, we get to see her in Zack Snyder’s Army Of The Dead this month on Netflix. But her last OTT outing was Netflix’s Leila series, which ran into a lot of controversy over its politics. And now, looks like Huma is all set to jump right in again, with Maharani on Sony LIV. The series, whose trailer dropped on Sunday, May 9, is a a fictional political drama set in 90s Bihar, where a sudden turn of events pushes the Chief Minister’s clueless wife into the centre of the state’s politics. Directed by Karan Sharma, the series also stars Sohum Shah, Amit Sial, Vineet Kumar, Pramod Pathak, Kani Kusruti, Inaam Ul Haq, Sushil Pandey, Atul Tiwari, Aashiq Hussain, Kannan Arunachalam, and Harish Khanna.

The bar for political dramas is set too high, now that we’ve seen foreign imports like Game Of Thrones, and our own creations back home, like Mirzapur. When Tandav dropped, the expectations were too damn high, and controversies aside, the show did falter on those expectations, particularly in the way it portrayed its female characters. So it isn’t a stretch to say that Maharani has its task cut out, and it is a tough audience out there, made up of critics as well as the woke younger generation, that it will have to impress.

The trailer thankfully plays its cards close to its chest for now, and only reveals Huma Qureshi’s character, Rani Bharati’s ascension to power, and not much about how she fares in this new position. It also nods at the caste politics rampant in 90s Bihar, which raises curiosity on how it tackles this subject. And then, of course, there’s the matter of a woman at the centre of state politics, surrounded by men who won’t to subjugate her and steal her power. That too in a time and era that was much more regressive towards women than now. Giving me major Game of Thrones déjà vu!

Here are 5 thoughts I had about the Maharani trailer:

1. Maharani gives major ‘Mirzapur with a dash of Paatal Lok‘ vibes, doesn’t it?

There’s this running joke that my friends and I have, where we ask for new show suggestions of anything other than those set in hinterland India. Because really, at this point, it feels like everyone wants to tell the story of small-town India! Now, don’t get me wrong, I think the mechanics of rural Indian society are really interesting and their rawness, grittiness, still feels unexplored. But only as long as it is done well. There’s also the whole debate on crime and violence (specially against women) porn for shock value that comes into questions in these kind of stories.

Maharani, so far as the trailer goes, gives me majorly Mirzapur with a dash of Paatal Lok vibes. And I am sufficiently intrigued by the premise. At least, it’s not UP again.

Also Read: 5 Thoughts We Had About ‘The Last Hour’ Trailer: We Love A Good Supernatural Twist To Our Crime Thrillers!

2. Huma Qureshi plays an illiterate woman thrust into politics, and I cannot way to see her hero’s / anti-hero’s journey

The character of Rani Bharati, just like Daenerys Targaryen, has scope for a very complex character arc, which can either be the ultimate hero or an anti-hero. And that smell of all sorts of possibilities is quite enticing to me, making me hope that she doesn’t remain some one-dimensional hero but also explores the grey area of morality, or even goes full dark later. Also, it shouldn’t be too easy for her to find her bearings either. Huma Qureshi is such a talented performer, so I hope the show has given her enough of a challenge to flex her full range.

Speaking about her character, Huma said, “It’s not often that you get to play a character that lets you traverse in extremes as an artist. Rani Bharti was one such role that got me to explore things I have never done before and yet make her look extremely grounded and relatable. Hers is a journey of rarity and grit which will surely strike a chord with the audience.”

3. There’s major scope to also highlight the plight of women in 90s Bihar

Looking at the way our country, actually, our whole world, is finding ways to regress when it comes to their attitude towards women, I think one way that period dramas can lend relevancy to their themes is to explore a stark comparison between past and present. The 90s are an adjacent decade to the 80s, when a woman was in the most powerful position in the country. And her governance and its fallout is bound to influence how other women in a powerful position in politics are looked upon by other men and women.

It would be interesting to explore this, juxtaposed with how women in politics are being seen and talked about today, considering we recently had quite election face-off between an experienced female politician and powerful male politicians. Furthermore, it will be interesting to see how caste politics too is handled in the show, and if they pay attention to how women are further marginalised by it.

4. Apart from Huma Qureshi, the rest of the cast of Maharani is quite promisingly full of genre vets!

We’ve got some familiar faces like Sohum Shah (The Big Bull, Tumbbad) who plays the Chief Minister and husband to Huma Qureshi’s Rani Bharti. Amit Sial aka Inspector Maurya and Pramod Pathak aka JP Yadav of Mirzapur fame are also in here, alongside Vineet Kumar, and many more. They’ve always managed to bring a little extra to their characters, and here’s hoping they make these new ones memorable too.

5. I don’t see female characters other than Rani Bharati in the trailer though….

Is Huma Qureshi going to be the only woman on this chessboard? I’m going to hold off judgement on that since it’s only the trailer, but I sincerely hope we’ve got more women in this story about a woman’s journey through power corridors.

Maharani will begin streaming on Sony LIV from May 28, 2021.